You may have seen the news story floating around that the NFL have been asking artists such as Coldplay to perform at their famous Superbowl half-time event (it’s previously featured ‘classic’ performances such as M.I.A. giving it the finger and Red Hot Chili Peppers not being plugged in to play (sadly their CD was still played)). Traditionally the NFL has just covered expenses, and with 111.5 million viewers worldwide they have a quite genuine ‘exposure’ argument for not having to provide much extra incentive to perform. It’s an American tradition and its influence is huge, but now it’s starting to treat performers in the same way it’s treating advertisers. This is hugely problematic – not just for the industry, but for culture in general.

The NFL’s yearly revenue is around $9bn. To put that in perspective, it’s about twice as big as the Premier League, and they’re looking to grow that income even further across the next ten years. Obviously someone looked at the incomings and outgoings and went, “an aeroplane for Flea – who the fuck is Flea?” and decided it might be best if Flea pays for his own flight.

I’m not saying Flea of the RHCP deserves any sort of sympathy for having to pay for a flight himself if he has to, I’m pretty certain the guy’s doing OK. Beyoncé managed to invade the US album charts last year after Destiny’s Child’s performance, no doubt helping along her yearly revenue of $115million, and Chris Martin isn’t doing too badly himself, but I still don’t think that artists should pay to play an event like the Superbowl.

In fairness to all of the above artists, their success (even if you/I don’t like the music) is somewhat deserved after working hard and building a committed team around them; together those artists probably keep a couple of hundred people employed and that’s no bad thing. But the problem here is that music is being seen as a commodity which has no wider cultural purpose by the NFL. What if other big-profit brands start thinking their ability to offer exposure is more important than the content itself? Imagine NFL players having to pay to join the team, so they can get exposure to boost their image rights and endorsement earnings? Madness. The fact is that the NFL have seen extremely rich people getting a lot richer off the back of their event, and the fact that the artist brings additional entertainment and excitement for the audience doesn’t matter much on a spreadsheet.

Paying to play for exposure on something like the Superbowl is something big artists will probably accept (if they’re forced to) because they have to keep the marketing momentum up, but this further divides the artists who have far too much money and artists trying to break through. If this model becomes widespread there will be two tiers to music: the musicians who have too much, and the ones who can barely get by.

To me, the music industry is partly responsible for developing this situation. Through generation X Factor and American Idol, pop stars have turned from accessible music vendors to celebrities who do a bit of music on the side. In this climate the music starts to play second fiddle to the image, and people stop seeing that ‘bit on the side’ thing as valuable. Then artists who use music to do something else other than get rich will be all but cut out from mainstream events and consciousness.

By not noting music’s wider social importance and value, the NFL is betraying the reason they wanted it at the event in the first place. It will also galvanise the process of cutting off arteries for potential exposure, especially for a new artist who can’t pay the sort of money the NFL will probably be looking for. Imagine if the NFL decided to help break an artist to the world every year. Every year some new act gets a flight to play in front of 111 million people. That’d make the event culturally significant, instead of just culturally relevant. Maybe we need to politely ask a corporate giant to take a step back and think about the quality of their show over the bottom line. Otherwise it’ll be Rihanna doing that Calvin Harris track from now until eternity. Every year. Forever. And surely that’ll stop the Superbowl being the event which has made them so much money in the first place? 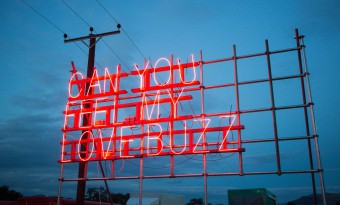 We're off to sunny (please please please) Skipton this weekend for the excellent Beacons Festival. Here's what we'll be watching - and what you should too...
Read More