Our latest singles round-up spends some time in Jerkcurb’s ‘Voodoo Saloon’, soaking up the sound of Arrows Of Love, BENET, Grace Lightman and many more…

Arrows Of Love have been piercing the ears of London’s hardier gig-goers for a while now with their uncompromising live performances, but this is definitely one of their best recorded efforts to date. Starting off with a riff ‘n’ rant combo before moving into darker, more desperate territory, the overall feeling is of Future Of The Left gatecrashing The Birthday Party. To be honest, after listening to ‘Signal’ you’ll be up for gatecrashing any party as long as Arrows Of Love are barrelling in behind you with a bag of cider.

Inspired by both Elliot Smith and Ryuichi Sakamoto, it’s no surprise that Barcelona’s BENET is capable of writing songs both hauntingly melodic and structurally ambitious. ‘All Those Thoughts’ showcases his expressive musicianship, building to an oceanic climax before slipping into a coda of warped chimes…

Coldplay – All I Can Think About Is You

I never thought I’d write anything about Coldplay that wasn’t belittling and insulting towards Chris Martin and his merry band of sheet-soilers, but if you stick the knife into easy targets then you have to be prepared to sheath it when they surprise you with something that’s, actually, not terrible. OK, so ‘All I Can Think About Is You’ isn’t exactly a classic, but compared to the awkwardly garish attempts at proper pop Coldplay have been attempting of late, it at least feels genuine. Put it this way, if Thom Yorke had written this it wouldn’t have been the worst track on the last Radiohead album.

We all know how good last year’s Jenny Hval album was, but who expected Blood Bitch to kick off a wave of vampire-themed conceptual indie? OK, so it’s probably more a ripple than a wave at the moment, but the beautiful, bloodstained romance of Grace Lightman’s ‘Fangs’ makes a strong case for the emerging microgenre. All we need is a name. Draculover’s Rock? Hmmm, maybe not…

Jerkcurb’s latest exudes a similar feeling of twisted romance, although ‘Voodoo Saloon’ concerns places even stranger than a vampire’s tomb – airports, shopping centres and other “non-places [and] purgatory environments”. To continue with Jerkcurb’s words, which are better than any I can pull together to describe the swooning beauty of this single, “The Voodoo Saloon is like a theme park version of Wetherspoons, a juxtaposition of cultures and ideas, making little sense, fermenting eternally in purgatory”. Sounds like a decent local tbf. Apart from the fact Wetherspoons don’t have music, so you wouldn’t be able to stick Jerkcurb on the jukebox…

A founding member of Fairport Convention, Judy Dyble has been pretty prolific over the last decade or so, putting out plenty of pleasing updates on the sixties psych-folk sound. This time she teams up with Andy Lewis to produce a bubbling brew that would fit nicely onto any Amorphous Androgynous compilation, with Dyble’s slightly deadpan vocals also recalling some of Viv Albertine’s recent solo work.

Apparently ‘Ava’ was inspired by “glimpses of news headlines and overheard conversations” while commuting through London, and it does seem to exude a feeling of early morning train journeys, before last night’s dreams have been fully shaken from your brain. The hi-hats towards the end seems to mimic a train track rhythm too, like a jazzier take on Kraftwerk’s ‘Trans-Europe Express’. Much like that dawn-breaking commute to work, it’s a journey you don’t quite want to end.

Machinedrum feat. Rosie Lowe – What Is This

If you like Machinedrum but found Human Energy just a touch too brash, then his latest material might be more to your taste. Retaining the incisive beats and production but dialling back the more in-your-face elements, the addition of Rosie Lowe’s rarely overstated vocals help make this perhaps the most accessible Machinedrum single to date.

Masterfully tuneful Americana just like Grandaddy used to make (don’t talk to me about their more recent stuff, I’m not interested). ‘The Cavern’ is taken from Post Moves’ new album Boogie Night at the Edge of Town – released this Friday – and it will indeed make you want to boogie inside a cavern at the edge of town. If there are no caverns available in your local area, a local hostelry or street corner will do fine.

This was premiered on our sister site MusicMap last Wednesday and it’s been on pretty heavy rotation ever since. ‘Feel Something’ is a cracking mix of rumbling bass and glossy vocals that bursts into a gigantic, collapsing mainframe of beats around the three-minute mark. Feel something? Bloody right.

Not the best verses either rapper here will ever produce, but the production by Felix Joseph and Red Lee can’t be praised enough – the synths are so dreamy you could almost be carried away by them but the popping beat keeps you from drifting off. There’s a lot of hype brewing around Jesse James Solomon right now, and ‘Son of the Ends’ goes some way to justifying it. 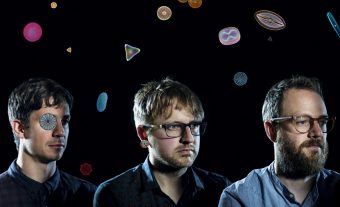 Our latest round-up of new and newish tracks sees us indulging in White Wine, submitting to EMA's 'Breathalyzer', and listening to the likes of ILK...
Read More