With two films (one loosely) based on Chris Sievey’s big headed alter ego on the way, we decided to pay tribute to the late legend that is Frank Sidebottom…

Music and comedy rarely make for a good partnership. The serious musicianship of the would-be rock star or orchestra member is at odds with the self-deprecating nature of much of the best comedy. Frank Sidebottom got around this issue by making sure his music was rubbish.

Chris Sievey was born in Cheshire in 1955, five miles from Timperley, and by 1975 had decided to get into music. After a failed sit-in at EMI (where he and his brother demanded to “see The Beatles”), he recorded songs under his own name before becoming part of The Freshies, a band who enjoyed a small amount of success from 1978.

Frank Sidebottom was born at some point in Chris’ mind but was revealed in 1984, his early songs released on DJ Marc Riley’s Manchester based In-Tape record label. After extensive touring on the early alternative comedy circuit alongside the likes of John Cooper Clarke, Sidebottom became a cult figure, appearing sporadically on the BBC and local TV in Manchester.

Frank Sidebottom wasn’t Chris Sievey, and as the likes of former bandmates such as journalist Jon Ronson describe, Chris Sievey wasn’t Frank Sidebottom. The curious semi-schizophrenic alter ego of a hard-working and imaginative man with obvious musical talent, Frank Sidebottom was a boy-child with an oversized papier mâché head who still lived with his mum. He regularly took the look-a-like puppet ‘Little Frank’ to his performances, talking to him like a person before pointing out his head was just made of cardboard.

I never got to see Frank perform live, after being made aware of his existence a little too late by an ex-flatmate, also a Cooper Clarke fan, who’d seen Sidebottom supporting the poet. One of the first things I was shown of his was this Beatles sketch on YouTube:

He comes across as an end of the pier performer in a total fantasy world which exists completely in his head. His “Proper Telly” show Test Card, recorded for late night Channel M (Manchester’s local channel), is even more psychedelic; a repetitive beat and notes hit at random while Sidebottom shouts “space music! For insomniacs!”…

His trademark joke was re-recording famous tracks but replacing place names with the name ‘Timperley’, and anything else with as much as he could think of. Hear his cover of The Smiths’ ‘Panic’ below, where he proclaims (in reference to radio DJ Annie Nightingale): “Anne The DJ, Anne the DJ, Anne the DJ, Of Radio Oooone”:

Frank Sidebottom never made it famous, and most people didn’t even know it was Chris Sievey inside his head. He disappeared into obscurity during the ’90s, returning solo in the ’00s before his passing in 2010. But a lot of people he knew did find fame. His entourage included the aforementioned Jon Ronson and Marc Riley, along with Chris Evans (a tour driver for the band) and The Royle Family creator Caroline Aherne, while one-time guitarist Richard Jones now manages The Pixies.

It seems that Sidebottom’s influence isn’t fading though. After his passing it was revealed that Sievey’s will would only afford him a ‘pauper’s funeral’. Ronson began asking for donations on Twitter, and in one day £21,631.55 was raised. At the end of 2013 a statue of the character was unveiled in Timperley, funded by £60,000’s worth of fan donations.

Before he died, after re-making contact with him, Ronson decided to try and make a Frank Sidebottom film and brought in What Richard Did director Lenny Abrahamson for the project. After deciding they didn’t want to make Sidebottom seem particularly real in any sense, they settled on a sort of fictionalised autobiography of Captain Beefheart, played by Frank Sidebottom, in turn (in this instance) played by Michael Fassbender.

A Kickstarter group was also set up by Steve Sullivan to make a documentary on Sievey’s life, entitled Being Frank. They more than doubled their target of £20,000 to make the film, raising over £48,000.

There’s something about Sidebottom – not exactly real, not fake, not that good at keyboard, not even particularly funny apart from being hysterical – which sums up a peculiar sense of British eccentricity. Watch the Comedy Roadshow on the BBC and realise how plain the stadium stand ups are compared to the genius of a man with a massive fake head on. Amazingly, he ended up animating Pingu, which meant that as a kid I was already seeing Sievey’s creativity at work.

There’s not really any way to describe, sum up, or explain Frank Sidebottom, but I think ‘Zoo Scrapbook’ is about as close as we’ll get. And that one time he recreated a Samuel Beckett play with a Dalek, at a show entitled ‘Art Is Ace’.

Read about Jon Ronson’s time in the band here, and find out about the documentary on Kickstarter here.

How to dress well, with Best Friends 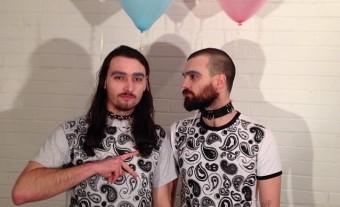 Want to join a band but worried that you dress like you've just raided the Lost & Found bin in Ladbrokes? Our guest editors Best Friends show you how it's done...
Read More