Right, so, before I start this review, I just need to throw some context in for you. I need you to imagine a quick scenario for me. Super easy, I promise.

OK so, imagine if you will: you’ve had a bad night’s sleep, tossing and turning, worrying about that bank overdraft that keeps gaining significant interest faster than you can pay it off. Returning to happier, non-committal days until your alarm starts screeching at you and you realise you weren’t even properly asleep in the first place. You drag yourself into the shower and what do you know? No hot water. Out the shower and getting dressed you discover a fresh rip right in the crotch of your only pair of clean jeans. The only milk in the fridge for your morning cup of tea has aged and rotted overnight. It’s pissing it down with rain outside, and you’ve just missed the only bus for the next 20 minutes.

I think you know where I’m going with this. Take that situation; apply it to your whole day. It doesn’t get any better right. Work is an awful slodge of boredom and tedious tasks that you honestly believe are below you, then you get home and discover the electricity and heating is non-existent in your hovel. Now, here’s the real important part, imagine you’ve taken off your shoes and just sat down, and the whole goddamn awful day washes over. You imagine what tomorrow will bring, but you know it will just be the same. There’s no way out for you, this is it now. You’re in a deep, deep hole of despair. You lean back and let out a long, deep sigh. That sigh, right there. You know the exact one I’m talking about. When it’s all too much for you and exhaustion and desperation has set in. Now I want you to take that sigh, hold it close, remember it. That sigh is the exact feeling I had the entire time while listening to Totally Fucking Gay’s latest album, Totally Fucking Gay.

Now, I like to think I’m a hip modern guy with a good understanding of different cultures and a firm foot in the comedy world. I enjoy dark, gross out comedy, I like laughing at jokes that you probably shouldn’t tell at Sunday dinner with your Nan. This is 2016, I’m a forward thinking 25 year old from East London!

The whole premise of the band TFG is, according to founding member and songwriter Kneepad Nikki, “an outlet to express my admiration for the extreme side of gay culture. I wanted to create an old school John Waters’s movie in sonic form.”. Which I totally get, I’m sure there’s definitely a market for it (although I must profess I’m not that up to date on music aimed at the extreme side of gay culture) but this is not so much flogging a dead horse as massacring an entire ranch and all the farmers in the surrounding area.

What starts out as a fairly comical intro in the form of ‘Marathon Gay Sex For Manly Men’ (and I do mean comical, look up the lyrics if you don’t believe me) soon descends into something much more irritating. Once you finish that song and the next one starts, you realise you’re on an incredibly annoying ride, like a merry-go-round with only one horse that’s a bit too small for you and your son demands that you ride on it with him despite the fact that you’re far too old and self-conscious for this sort of thing and the same awful tune plays again and again while you slowly rotate in the heat of the stares from strangers on the outside. Like a kebab.

Maybe it went completely over my head, but I’m not convinced it did. Kneepad Nikki’s (real name Mike Hymson) monotonous voice continuously talks/sings over the awful background noise of rough guitar riffs mixed with synths akin to an old Game Boy and the occasional blast beat breakdown, and makes you so infuriated you soon switch off to the actual lyrics, which are the only redeeming feature. Read alone you’d certainly release a fair few chuckles, but mixed into the noise of TFG they lose their impact.

It goes on like this for another nine songs, covering same-sex marriage to coming out to your angry militant dad (while gargling salty cum in-between). I get that it’s supposed to be a comedy group and as I previously said, the lyrics are pretty funny. According to Nikki – “TFG is a pop grindcore comedy project first and foremost. I want people to laugh out loud when they hear this shit. However, TFG’s secondary purpose is to be a homophobe’s worst nightmare. We’re like the NWA of homosexuality. We take all the things that conservatives fear about gay culture-and instead of downplaying them for societal approval; we amplify them beyond caricature. Then we shove them right up their ass.” Fair point, my only argument is that I don’t think many homophobes would be listening to a band called Totally Fucking Gay in the first place. Maybe the closeted self-hating ones. Regardless of the political agenda, I’m only interested in the musical aspect of the band, and I gotta tell you, it did absolutely nothing for me. Totally Fucking Gay? Totally Fucking Shit. 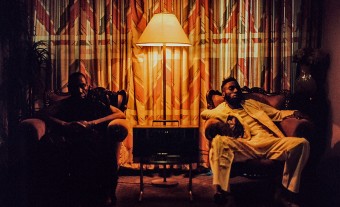