When Equals (aka producer James Lowe and singer Ade Omotayo) first dropped into The Monitors’ inbox a couple of months ago, we were immediately knocked back by the duo’s combination of soulful vocals with sleek yet powerful synths – it was like having your ears dropped into a bassbin full of giant, writhing snakes. Only sexy, rather than inconceivably terrifying.

Having released their debut EP Single Soul,last month, the pair have now posted a visual accompaniment to that record’s undisputed highlight – the stirringly passionate ‘Pyre’. It’s a track that merits some serious production values when it comes to shooting a promo for it, and luckily director Louis Ellison, who’s created videos for everyone from Chvrches to Naughty Boy, was on hand to do it justice. Seriously, the result is so slick it could be spurting out of a ruptured oil tanker.

Set in East London’s docks and starring dancer / choreographer Fabrice Omores, the deserted urban scenery and Omores’ striking moves recall last year’s Forest Swords video for ‘Thor’s Stone’. As good as that video was, however, this is better. The image of Omores rising out of the water, his body so rigid he could almost be a giant table footballer, is an incredible way to begin, and the quality of the cinematography stays sky-high throughout. The editing at the beginning is as dazzlingly erratic as the dancing, which itself frequently blurs the line between movement and collapse. As you (and various hooded onlookers, including Lowe and Omotayo themselves) watch Omores progressing through this urban wasteland, you wonder whether he’s stumbling towards death or about to undergo some sort of incredible metamorphosis.

It turns out to be something towards the latter, with the title and the burn holes in his hoodie providing some obvious clues towards the dramatically elemental ending. It’s imagery you’re unlikely to forget, and Equals’ music probably isn’t going to leave your ears anytime soon either. Omatayo has already toured the world as one of Amy Winehouse’s backing singers (the late star discovered him when they both performed in the same covers band at the beginning of her career). With a bit of luck, he and his partner could be drawing big crowds themselves before too long… 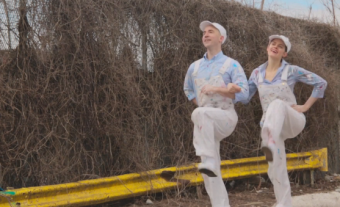