Beginning life as a four-piece band that met when most of the members’ other bands were on hiatus, Chicago-based Disappears embrace and experiment with the familiar set-up of guitars, bass, vocals and drums, with a noteworthy rotation of the latter. A hardworking band, they steadily provide an annual release that charts their musical journey, making music that stretches the boundaries of the familiar guitar band set-up.

On meeting Disappears I was impressed by how serene and collected the band were as individuals, and also really respected their mentality as a musical act. They don’t seem too anxious about what anyone else thinks about them, “We make music for ourselves, not for other people” says front man Brian Case, before adding, “But it’s great that people like the music we make”. Sadly, the file containing my interview and many quotey gems from Disappears became corrupted, so I lost the entirety of what was a really engaging conversation. The clue is in their name I guess. The nature of everything is that it is disappearing: moments are fleeting, and this conversation was just another moment. I have to make the transience significant, otherwise I’ll be traumatised forever by the thought that a great interview was lost for nothing.

Lux (2010), the band’s first official album release, was a whirlwind of reverb-heavy grit rock, punctuated by tracks like ‘Pearly Gates’ that I like to describe as folk-drone. At this point, there was no narrative surrounding the drummer, and the band set the tone for their future sound: dark, dense music featuring their now famed trance-like repetition and a sound sure to blow you away live. Guider, released in 2011, stretched previous boundaries to include vaguely psychedelic influences: the rambling lore of ‘Revisiting’ is a perfect example of the band’s exploration in this album.

It was at this point that Graeme Gibson left to be replaced by Steve Shelley, former Sonic Youth drummer. His presence was immediately apparent in 2012’s Pre Language, recorded at Sonic Youth’s Echo Canyon West studio. A guitar-focused sound ran through the album, and revealed yet another facet of the Disappears sound catalogue.

There was always going to be a bit of a fuss over the fact that a member of Sonic Youth was going to be joining the band, but like everything else Disappears-related, it all seemed pretty calm and cool. On being asked if there was an extra level of expectation when Shelley was part of the band, Brian explains, “It wasn’t added pressure – it just was a different dynamic”. Damon adds, “It wasn’t as easy to practise, now [with new drummer Noah Leger] we practise like twice a week”. With Shelley, the band used drum machines on tracks and then sent them to him. “I mean, that was cool, it’s like a different way of doing things. But then sending that to Steve could sometimes influence how he might play that track,” Brian says.

Noah joined the band after Shelley’s amicable departure, and it seems to have ushered in a new age of music-making for the band. They released Era in 2013, shortly after the Kone EP, and it feels as if they’ve tapped into their true source. They’ve always been a band that have called to mind certain references – The Fall, Joy Division, Sonic Youth – but in Era they’ve pinned down a homogenous sound. As Disappears, they’ve found themselves.

It’s difficult not to attribute this to the new dynamic with Noah in the band – he brings something subtle and yet darkly interesting to the album. ‘New House’ pulses with a deep and unique drum beat (I’d rather say heartbeat) that puts me in mind of Joseph Conrad’s Heart of Darkness. “I’ve been listening to a lot of African music lately,” Damon says, on being asked about new music, while Noah says that the drumming style isn’t planned, instead it’s a more organic process that “just kind of happens”. It seems like the band’s dynamic creates an energy during practice that allows them to access new musical ideas. This easy familiarity might be due to the fact that the band have known each other for many years; Noah didn’t just drop into the band. “We’ve known him since way back, like over a decade,” says Brian, “we were all in different bands and we gradually just came together”.

Despite the developing musical identity, one trait in particular has remained prevalent: the use of repetition in the band’s music. When I mentioned this, Brian seems enthused, “Actually, we’re doing projections for the show tomorrow, we’re really into showing repetitive images alongside the music. The ones we’ll be showing are by an artist called Alexander Stewart”. When I asked about repetition and the connection it formed with the crowd, the conversation between the band developed into a discussion as to the nature of repetition in their music: Damon described the effect of the repetition as something that could be described as meditative or trance-like, while Jonathan van Herik and Brian went on to discuss the distinction between a trance and a meditation.

They ended up examining the nuances between the words, without necessarily attaching any meaning to their band or their music. It was interesting to note that they came across as uninterested in using this conversation to create a dialogue around their music to show off their intelligence. It also showed their collective personality and modus operandi: laidback, open-minded and smart, creating music which flows naturally from, rather than pointing consciously to, their intellectual interests. It would be too little to say they don’t take themselves overly seriously, but they don’t: they’re just some guys doing what they love, and doing it well.

A juicy interview with Fruit Tones... 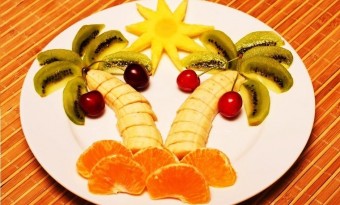