“Be the change you want to see”

If you had the nerve to set a tentative foot on a corporate career ladder, this quote would likely sit on a powerpoint slide during mandatory team bonding. Ghandi said it so it must be true and right. This is just one example where a positive message, rooted in socially progressive ideas, gets co-opted by the powerful and dangled as an aspirational carrot to improve the self, to become, in H.Grimace’s words, a self-architect.

Hannah Gledhill’s songwriting on the London quartet’s impressive debut, Self Architect, concerns itself with the increasingly impotent search for identity against a swiftly expanding backdrop of cultural and environmental homogeneity, set in the hollow desert of insatiable market forces and their photoshopped army of brands and selfies.

To me, the album’s biggest achievement is that it makes me think, feel and enjoy in equal measure. Its underlying tone is serious but not bitter, the guitars’ voicings powerful, lingering and darkly celebratory. The swivelling sounds and sturdy riffs stir up an immediate, pleasant, nostalgic response as they skilfully hark back to ’90s grunge and ‘80s post-punk, and will remind you of at least three of your favourite guitar bands. Promise.

The song structures on Self Architect build on simple, slightly off-sounding, often cleanly played guitar licks that bounce off Gledhill’s measured vocals. The guitars quickly double up and grow in texture while the drums gain prominence until the whole thing breaks into the kind of catchy choruses heard on ‘Thoroughbred’, ‘Call it out’ and ‘Royal Hush’.

‘2.1 Woman’, a collaboration with poet Vivienne Griffin, stands out with its spoken word lyrics that drily rip through the absurd nature of the contradictory messages about femininity served up daily by some media outlets. I find the masterful execution of the song’s uplifting shoegaze finale nothing short of empowering as it emphasises the utter irrelevance of the glut of these types of pointless yet all-too-often damaging messages.

‘Land/Body’ laments the breakdown of the connection between humans and their environment which leads to ‘so much struggle so much fight’, and the ensuing alienation among people when ‘There is no connection, no unity, nothing thrives in uniformity’. The beautiful lyrics and vocals move to the background in the second half, when a soft shell of floating guitars and driving drums emerges and lifts the heavy mood of the song’s subject matter.

‘Thoroughbred’, ’Self Architect’ and ‘Jockey’ have a punky, riot grrrl feel but H.Grimace take no interest in shouting inconvenient truths down a void. They make me want to listen to what they have got to say as the music’s lovely tension underlines the message.

‘Lypsync’ is a guitar rock feast that made me want to go and revisit the Pixies, Queens of the Stone Age’s ‘The Lost Art of Keeping a Secret’ and even the Cranberries’ ‘Zombie’, all at the same time. My personal highlight is ‘Royal Hush’ with its haunting, discordant riffs and the pleading chorus where Gledhill defiantly throws the loaded question out there: ‘Is it enough for you, is it enough for me?’.

What comes across on Self Architect is that H.Grimace are a band with things to say who went and created the music they (and I for that matter) like to hear. They base it in a modern context, aware of the societal ailments that plague men and women in today’s accelerated, visual and global age, presuming their real faces have not yet been nibbled at by their own selfies, as the CD cover art, made by Gledhill herself, seems to suggest. Gledhill’s voice deliberately wavers between anger, detachment and strength and is happy to leave the centre stage when everything has been said and smouldering guitar cacophonies, healthy doses of discord and relentless drum and cymbal melodies dominate.

Musically, H.Grimace do not walk down untrodden paths but they can pull out riffs from interwoven structures in a way that matches bands like Sonic Youth, Stereolab and Moon Duo. The band’s conviction, adoration of guitars and the obvious love with which they honour their chosen domain makes this an indie rock album as critical, defiant and enjoyable as they come.

Julia Holter - In The Same Room 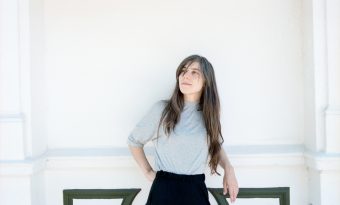 Julia Holter's astonishing ability to re-imagine turns a collection of live studio recordings into a richly theatrical and compelling album in its own right...
Read More