Since their inception, Warpaint have been surrounded with a growing mythology, thanks to an air of mystery, technical prowess and fascinating onstage chemistry. But the significant budget increase since the last release leaks a little onto the skin of the beast.

Flood (Mike Ellis) produces, Nigel Godrich mixes and Chris Cunningham created the album art, as well as making a documentary about the band: it’s easy to see how Warpaint, noted for creating insular music, could be diverted from this theme merely by being around such figures.

Within the band, drummer Stella Mozgawa makes her recording debut with Warpaint after playing live with them for years, joining the familiar set-up of Emily Kokal, Theresa Wayman and Jenny Lee Lindberg. Their self-titling of this particular album could even be interpreted as an attempt to stamp it with a feeling of selfness, if you were going to get all amateur psychotherapist on its ass.

Warpaint opens with ‘Intro’, featuring overtones in generic post-rock colours. Like much of the album, this track is relatively short but feels longer as it lacks a focal point. It seems especially redundant on slipping into its successor ‘Keep It Healthy’, which sounds mostly identical with added vocals. The opening of the album displays a veiled distance between the band members and the sounds coming out of them. Lindberg said that working with producer Flood was a “little bit awkward”, and while it’s clear that the band overcame their musical introversion enough to make an album, it does beg the question of what the record would have been had they had direct control over the production.

‘Love Is To Die’ follows, and with its even structure and singalong chorus is as much of an insta-hit as Warpaint are ever likely to make. It gathers up ethereal, melodic material to make for a highly listenable experience, and a song that will draw new listeners to the live experience.

Godrich’s mixing balances the elements of the track perfectly: the willowy vocals, drum beat, bass melody and electronic effects retain distinct clarity and never jostle for space. Throughout the album he emphasises the individual talents of each member, makes the beat a central focus and encourages the atmosphere of vocals and instrumentals with effects. But mixing and mastering is a personal as well as a technical process, and with his famously golden touch in this area it would be interesting to know how much of the process was left exclusively to him, with no direct input from the band.

‘Hi’ reveals Godrich’s presence most clearly: the vocals are frequently held in reverb and the track slips in and out of short, tangled, effect-heavy peaks. The entirety of the song builds on itself and draws everything in, and despite being initially underwhelmed, after further listening I view it as a perfectly crafted track with a lot to offer. Every listen affords a new detail: there are layers upon layers, intimately woven with perfect skill. Its placement is ideal, too: it frames the scene for ‘Biggy’, which is less detail-heavy and varied but a very easy, ambient listen, although crowned with an ill-fitting steel drum melody towards the end.

An abrupt change of scene arrives with ‘Disco // very’, in the form of devious playground-style chanting chased up by a filthy bassline. But before a minute is up the track devolves into a series of separate elements, interesting alone, but uncomfortably fitted together to form the semblance of a cohesive, balanced whole. Upward-inflected yells sit tacked onto the ends of lines, invoking the spirit of early M.I.A and inviting unflattering comparisons, while the lyrics, ‘Don’t you battle / We will kill you / Rip you up and tear you in two’, serve to highlight how badly the track lacks authentic ferocity rather than smacking you with the badass stick. The track is a slightly unnatural foray into the kind of swagger that works better for Nicki Minaj than Warpaint.

Warpaint never quite commits to rounded songs, preferring to meander instead, and this is never clearer than with ‘Go In’. Vocal effects and semi-melodies bob up to the surface, alongside interesting featurettes from each instrument: especially well displayed are Mozgawa’s gifted drumming abilities. But then a shockingly lazy fade-out ends the track, while the instruments are still in a steady groove. Was there seriously no better way to end it? It’s like suffocating your ailing child with a pillow.

Joining the more emotionally detached tracks on the album, the machine buzz of ‘Feeling Alright’ has already established itself as a favourite among many listeners. But among the later songs ‘Drive’ is the highlight thanks to a prolonged, melodic crescendo, with support effects recalling none other than Radiohead. ‘Son’, heavy and swinging, closes the album in the familiarly lo-fi Warpaint style.

The danger of a band still emerging, in a way, is that they will be dwarfed by the multitude of figures surrounding their latest release. It’s hard not to frequently mention the titans involved with the production of Warpaint, and yet it’s strictly necessary.

Two years ago Chris Cunningham picked up on the potential of the magnetic Warpaint mythology, and very recently released an incredible preview of a documentary on the band (above). It does an excellent job of using ‘Love Is To Die’ to highlight the magic of the physical presence of the band members, and vice versa, creates intimate shots of the band that serve to display their closeness to their music.

The preview is a warm and powerful reminder of the band’s talent, but it is Cunningham’s gift. He’d have to create a video for each track on the record to enable me to access the same feeling of genuine awe for Warpaint, and ‘Warpaint’. The overwhelming feeling surrounding this release is that, when it comes to feeling like the band are still as close as they were to their music, seeing is believing. 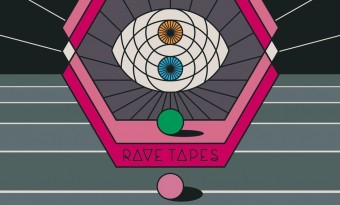 Rave Tapes has been hyped up as Mogwai's electronic-focused album, but is it really just more of the same from Glasgow's perennial post-rockers?
Read More