M.I.A. may still have it, but how do this week’s other new tracks shape up? Well, any track with an Eastenders reference in the lyrics is bound to win Nicholas Burman over…

While the initial kicks promise an alternative take on the power pop genre, ‘Runnin’ fails to build up to a big enough chorus which would have been the real clincher here. The anti-chorus might be a purposeful tactic, but it makes the whole thing a little anticlimactic.

I’m a little gutted the initial jungle rhythm here is rapidly morphed into a EuroPop take on Rustie’s maximalism, as the results are that ‘Life Without Love”s initial bark is never followed with any bite.

M.I.A. is good at bangers; I think that’s something everything can agree on. While ‘CanSeeCanDo’ may not be a ‘Bad Girls’ or ‘Paper Planes’ (sounding a lot more like her less polished earlier stuff) but the broken rhythms, combined with just about club-friendly enough wobs and synth stabs ensure it’ll see crowds stomping at future shows.

She also consistently includes well-thought and well-meaning political content in her lyrics, which come without any of the preachy awkwardness that usually follows in less understanding hands. Being a Tamil herself, she’s long been an outspoken voice on the political situation in Sri Lanka and has dealt with the subject in her music throughout her career. Following a recent Channel 4 News interview where she stated the focus for the new Sri Lankan government should be on “sorting out the ethnic conflict”, in CanSeeCanDo you can hear echoes of that sentiment (“can we get past history/I want to make a future with you”). M.I.A. offsets imagery of “seeing drones […] seeing doom” with this willing optimism. A ‘Can Do’ attitude would be much appreciated in other politically minded lyricism, take note everyone.

I’m certainly happy that a few more bands are reaching into more socially aware territory. ‘Iceman’ sees this particular Set ask “Excuse me have you voted yet?” around a vintage ’60s sound. The dense lyrical verses draw me in, but the indie-pop veterans’ dated aesthetic keep it from sounding like it’s actually from 2015.

“Everybody everywhere needs to feel that someone’s there,” Outfit croon around the quickly growing electronic wall of noise on this new track. While the subject (folorn isolation) and burst of reverb in the finale are both right up my street, ‘Genderless’ feels a lot like a slow burner from the end of a LP than a song to be enjoyed in isolation.

Stormzy – Know Me From

London’s grime aficionados may be quick to point out that the scene stayed strong in between the initial boom and the current resurgence, but that middle period has obviously allowed talent to develop to the point where every tune being released at the moment is solid gold – a (sort of) luxury most other genres would kill for in the current industry climate.

“I’m a big man like Shirley,” Stormzy announces, making a reference so specific to the UK (Eastenders, in case you were wondering) that the rest of the music-listening world are going to go: “Eh?” But it’s these sort of idiosyncrasies which make the genre feel so playful.

‘Ubuntu’ clearly draws lines from the mellow moments of the Warp catalogue and the ghostly electronica of a Keysound or Tri Angle release, with an added sparkle of Middle Eastern strings and percussion to give it a distinct flavour. It doesn’t do loads, but it does it very well.

VOWS (feat. Gary Numan): Losing Myself In You

Usually ‘featuring’ guests don’t do a lot else other than add a top line and go home. Not the case here, as ‘Losing Myself In You’ has the Goth electro stomp of Gary Numan all over it. Not the most original thing you’ll ever hear, but a sharp and well-concocted burst of new wave glam which will likely get you giving Replicas another spin.

Is there a teen drama on the way? Because this should probably be put on it. I didn’t ask for a squeaky synth reworking of Weezer’s legacy and I probably won’t be returning to this, but someone out there needs wide eyed and genuinely uncynical music to play while they take their first crush on a date to the park.

Sounding like a long lost late-’60s B-Side in the best way possible, The Zoltars have obviously studied the art of succinct West Coast garage and decided to not fuck with the formula. This could make you think they’ve been lazy, but it betrays a sense that under the gristle of the production there is a band on their way to writing some big hitters. The vocals also contain a few punchy couplets to boot. 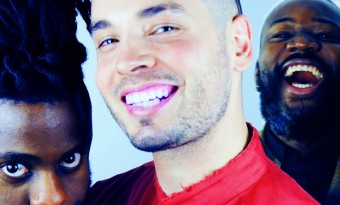 The latest cut from Young Fathers' new album has us dancing without shame, as do the likes of Skepta, Funkstörung, Darq E Freaker and The Lovely Eggs...
Read More