The last solo video from Stand Up Against Heart Crime singer and The-Monitors’ Barcelona correspondent Josep Xortó was a retro-futuristic beauty, and this follow-up, though very different in style, is just as good. Gorgeously shot in black and white, we follow a suited, booted and, quite literally, smoking Josep (looking not unlike a Catalan Serge Gainsbourg) as he strolls through town to the sound of slap bass and a crisp disco beat. He is, you could say, dressed for success.

From there it’s a whirlwind of fantasy dance routines, magic clocks, enchanted females and a watch that appears to have been wound a little too tightly, before the big final performance (at a club called Success!, natch) where the monochrome tones give way to full colour (and one of those electric crystal ball things like they have at the Science Museum).

The cinematography and close-ups are fantastic, and the whole shebang is, much like the song, impeccably smooth. Destined for success? Looks like it. 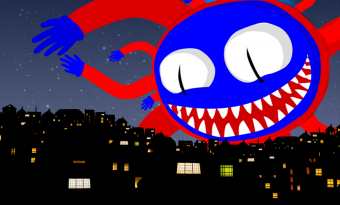 Following on from the Specials-esque zombie skank of their last single, this colourful animated video imagines what might happen if you crossed X-Factor with John Carpenter's The Thing...
Read More