Snoop Dogg is, at this point, more a meticulously well-maintained branding exercise than an actual human person. Every move he makes seems calculated to keep him in the public consciousness, which he’s managed to control so well that he still retains a cache of cool despite now being a 41-year-old father of three who’s approaching the age where he’ll soon be trading gin and juice for cocoa and cream.

One of the reasons his image has remained strong is that he’s able to utilise something most brands can’t go near for fear of a backlash – marijuana. From ‘Let’s Get Blown’ to his recent reinvention as a ‘rastafarian’, Snoop’s whole image is now built around the fact that he smokes a shitload of weed, thus making him a hero for teenage stoners everywhere.

And it’s them, you imagine, who are the main target market for Snoopify. It’s the second Snoop app we’ve featured in as many months, demonstrating how his formidable brand machine is totally on top of technology as well. The app basically allows you to stick Snoop-related ‘stickers’ (many of which you have to pay for, natch) over your photos and then share them via social media – basically the smartphone equivalent of drawing massive spliffs all over photos of your mates. Is it any good? We’ll leave it to reviews from his fans on Google-Play (where it currently has four stars) to help you decide: “I love anything about Snoop, how u can add ur own to it and make it look like hes with you”. Nuff said. 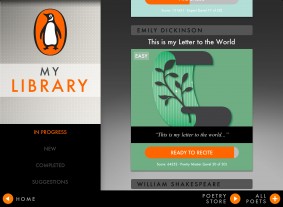 The last poetry app we featured was the less than academic 'Shatoetry', which allowed you to compose verse using samples of William Shatner's voice. Penguin's Poems by Heart is a somewhat more practical application, designed to help you memorise classic poems so that you can recite them at a moment's notice. You know those showy, self-satisfied people who can smugly drop a line of Shakespeare or Shelley into conversation at the drop of a hat? That could be YOU. The app works by asking you to fill in different blanks in each poem, with the difficulty becoming more severe with every reading. It comes complete with some free Blake and Shakespeare, with further packages of poems (including works from Walt Whitman, Emily Dickinson and Edgar Allen Poe) available to purchase thereafter. Quoth the raven: 99p per bundle...
Read More