After yesterday’s brave/stupid decision to post an album review entirely in verse, we today present another innovation in music journalism: the review in stereo. Two reviewers – one gig (no readers). After all, why trust one opinionated idiot when you can trust two? Our first victims in this experiment are the Minneapolis crew Marijuana Deathsquads, a band that’s featured members of everyone from Gayngs and Poliça to Bon Iver and To Kill a Petty Bourgeoisie over the years (and sound absolutely nothing like any of them). First up, the loftier (physically at least) perspective of Nicholas Burman…

The Black Heart is, despite its name, one of the most welcoming places in the very dark lungs of Camden. Long, long gone are the days when you’d feel any air of excitement or diversity in the market area. Nowadays you’ll find groups of lads crawling up the hill, eating KFC from the top of bins. The area’s best boozer, The Crown and Goose, closed on New Year’s Day this year, and that for many was the death knoll for Camden as a ‘going out’ destination. Then there’s the infatuation with past heroes and the infamous, tacky t-shirts and dodgy headphones stands lining the streets. Honestly, it’s just not good.

Which is annoying as everyone agrees there’s still plenty of decent venues in the area, The Black Heart being one of them. Tucked behind tourist/emo trap The World’s End, its slightly goth leanings are tongue in cheek enough to make the place welcoming while also retaining an air of charisma.

The upstairs venue is literally a box, but a very decent box. Marijuana Deathsquads push its sound system to the limit, reverberating bass synths growling through the dedicated, if a little sparse, crowd. The band is made up of three drummers, and about three singers switching between pressing console buttons. They’re balls of energy with sweaty, aggressive onstage personas. It’s hard to believe there’s members of Poliça in their line up, until the penultimate track where apparent samples of Channy Leaneagh are the launch pad for another dazzling five minutes of interloping rhythms, with vocals reminiscent of The Fall if Mark E. Smith collaborated with Death Grips.

At times, the sheer amount of drums make the band sound a lot more epic than you might presume. Coming across as a sort of apocalyptic Arcade Fire, they always seem ready to go into some sort of odd stadium territory, while being too off kilter for most Kings of Leon fans to engage with.

A decent noise for those disheartened with the bland alt-culture street hawking just a minute’s walk from the venue. I’d end this review with a sonnet, but I’m not smoking as much dope as the editor.

For the record, the last time I consumed the devil’s lettuce with any regularity was back when Camden was still cool. Which was, as expressed above, a long time ago. Londoners on Facebook will probably have noticed petitions flying around concerning the proposed high speed rail line that will apparently decimate the area, but maybe that would be a good thing? It’d probably force Boris Johnson’s dad (the driving force behind the campaign) to move out at least.

Still, despite the area’s rank crapness, music still thrives. Last night, for instance, we were able to stroll around the corner after the gig and see Tav Falco and Fat White Family play for free at the Blues Kitchen. Even bloody Prince played the Electric Ballroom last week, although at his current rate he’ll be opening at New Cross Inn by the end of the month…

Anyway, the gig. I confess to not having heard of Marijuana Deathsquads before Nick showed me the excellent recent music video for their track ‘Ewok Sadness’ (above) but I was immediately intrigued. You know when you hear a band for the first time and think, “this is good, but I bet they sound even better live”? That.

I wasn’t wrong either. From the get go MD unleash a torrent of twisted noise, with frantic rhythms battling against vocals treated to sound like the dwarf from that Twin Peaks dream scene. To be honest, that particular facet of their sound would probably get quite irritating after a period, if it wasn’t for the mighty beats behind it.

For ages I thought that having multiple drum kits onstage was a folly; even brilliant bands like Dirtbombs and Caribou seemed to suffer from the rhythms being a little messy now and then. But the best band I’ve seen so far this year, Nope, had two drummers, and with bands like AKDK (which stands for ‘Analogue kit/Digital Kit – the only two instruments in the band) consistently wowing audiences, it seems I might have to rethink my position.

Marijuana Deathsquads are definitely contributing to that – there’s so much rhythm in the room it’s like watching a gig in Tito Puente’s pants. It certainly seems to get the crowd going – one young lad in front of us seems to be attempting to frug himself into oblivion. Then again, he’d been doing the same thing before the gig to a very dubious dance remix of ‘Everywhere’ by Fleetwood Mac, so it’s not entirely clear how much credit the band should take for that.

I’m not sure what sort of stadium would host this lot. Instead the music makes me think of what might have happened if the people behind Anticon had been into metal rather than hip-hop. Sure the sound is frantic and loud, but buried underneath it all are some great tunes and inventive sounds. The drums are still the key though. “Do you like cymbal rushes as much as we do?” comes the cry from the stage. The answer is an affirmative yes.

Hmmm, I’ve just realised this ‘dual review’ thing would work a lot better with some seismic differences of opinion. So with that in mind, I’d like to point out that if Nick thinks Camden High Street is a ‘hill’ then he must have gone his whole without ever walking up an incline that exceeds five degrees. I can only assume he’s from the bit of Somerset that’s currently mostly underwater… 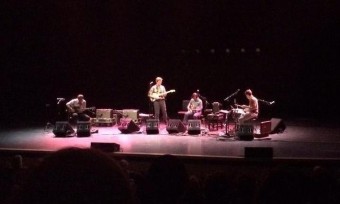 The artist formerly known as Smog turns the Thames into his own personal Dream River, during a casually magical performance.
Read More