I’ve had a glut of gigs recently: Gas – music as you’d expect (great) and incredible visual accompaniment, like a HD acid trip deep in a Bavarian forest, both blissful, awe inspiring, ominous and threatening. Shellac – precision, sharp, punishing, beautiful and very good humoured. Acid Mother’s Temple – I may have been witnessing a great band but the sound at the venue (Lewes Con Club) was so poor it was hard to tell. To round off this glut of high profile gigs with established names I was invited along to Hotel Perilocco for a free gig with relative unknowns Emberhoney and Moviestar. And this turned out to be the most fun of them all.

The venue itself is a themed boutique hotel that stays true to Brighton’s history of seedy, bohemian decadence, so I felt quite at home. Also remarkable was that the sound quality was actually much better than two of the previous high profile shows with nothing more than a small vocal PA.

Emberhoney is the nom de plume of Taylor Madison Damion who is something of a female Nick Cave, albeit a little more reserved. Armed with nothing more than a piano and later a guitar she conjures up a deep, gothic-tinged atmosphere of melancholy, yearning and doomed love. The suggestion that she would be the perfect chanteuse for the in-house entertainment in a bar for a David Lynch movie rings true. Her final track describes the painful itch of addiction and the weight of a heavy past that sends a shiver up my spine. The set is short, leaving a celebratory audience desiring more. 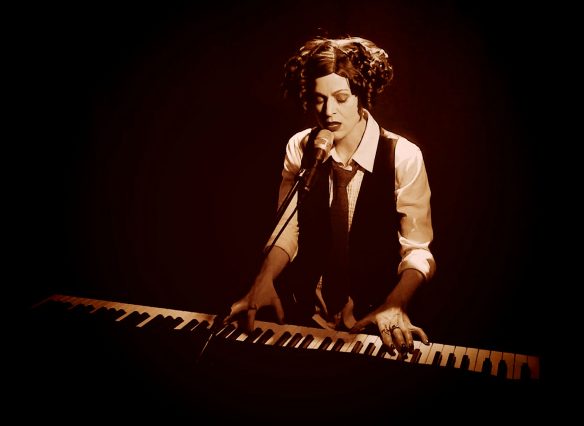 Moviestar have headed to our shores from Norway, and also, they claim, from the future, to bring harmony to the world through the power of rock n roll or somesuch. Ludicrous claims, but at some point during their set I’m beginning to think this may actually be true. Fronted up by two females wearing garb that’s a bizarre mix of ’80s tennis meets majorette with a dude at the back on drums with a very cool haircut, their look is both eccentric and memorable.

As is the odd array of instruments they play. The drummer has a small keyboard attached to his kick drum. The main vocalist plays ukulele, kazoo, electric autoharp, an odd electric guitar/ukulele hybrid that has a tiny tiny keyboard glued to it. The secondary vocalist plays autoharp, electric guitar and bass foot pedals. It’s a sonic armoury deployed in delivering sheer musical joy that manages to be silly, uplifting, funny, funky, adventurous, eccentric, otherworldly…

The packed room is won over by their sheer joi de vivre and effortless strangeness. Between-song banter is funny and warm. We’re even encouraged to sing along for the chorus of one song, and do. This never happens for a band where nobody knows the songs and isn’t utterly shitfaced drunk. The songs are as sexy and engaging as the performers. I hear pop, post-punk, rock and electronica woven together in a style that’s their own; I have no comparisons to other bands.

Moviestar are currently doing the rounds and I recommend you give them a check and see if you too are charmed by their quirky creations.

Palm attempt to hold Brighton's attention at The Joker 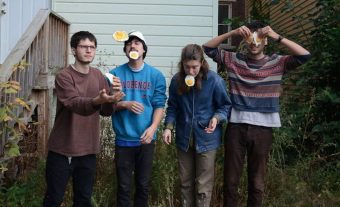 Experimental Philadelphia four-piece Palm are almost telepathically tight, but is that enough to win over the midweek throng at Brighton venue The Joker?
Read More