I was tempted along to check this band out on the strength that they’re a bit like Deerhoof. I love Deerhoof so figure why not, gets me out the house, but alarm bells were gently jangling in the distance. Often PRs will hype new or little known bands by comparing them to better known bands, which of course makes sense, you need a reference point. Sometimes this needs to be taken with a pinch of salt though; I’ve had one too many ‘this band’s like Sunn 0))) channelling ’74 Tangerine Dream’ or ‘imagine Van Halen in ’77 trading guitars for accordions’. That type of nonsense. And of course the bands in question never sound anything like that.

Thankfully Palm are intriguing from the off and occupy a similar eccentric take on rock as The ‘hoof. A four-piece art/math rock type outfit from the USA, they constitute a drummer who looks like a younger, less irritated Steve Albini, a very geeky looking male guitarist/singer, a female guitarist/singer who nods along to the tunes like someone in vigorous agreement at a work meeting and a moustachioed bassist who gets a massive sound from his instrument with the slightest of thumb motions. 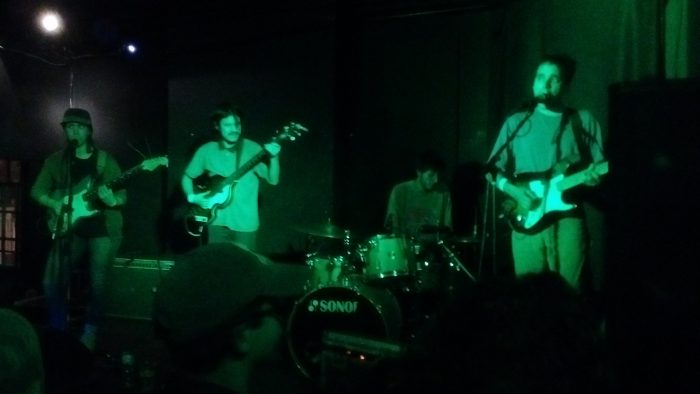 The guitar sound on the early tracks reminds me of Sonic Youth’s first album but quickly mutates into a sound replicating steel drums, with chorus and mild fuzz. The guitars sound mighty cool in fact, and the interplay between the two guitars borders on telepathic. In fact the band is so tight, well-oiled and precise they could all be sharing some kind of joint music mind. Vulcan music mind-meld or some such. American bands, as I’ve said before, take being as good as they possibly can quite seriously (something the shambling support band could learn from tonight).

Palm love the chorus effect, it’s applied to not only the guitars but also the vocals which gives a widescreen air-brushed sheen, allowing the voices to float pleasantly over the rest of the mix. The drums are creating the weirdest of grooves, odd time signatures collide with handbrake-turn fills and everyone on stage stays locked in. A peak is reached about two thirds of the way into the set as a song stretches out into an extended end section that repeats ad-infinitum punctuated by an occasional lurch, fill or U-turn. It’s mighty impressive and gets a big crowd response (turn-out is pretty good for a Weds night with a little known band).

This is where problems set in. For the rest of tonight’s set Palm repeat the same formulas but don’t scale the same heights. I’m dying for a melodic hook to pull me in, or just something that deviates a little bit from what’s already happened. This band is so good they have potential to push further, really soar, blow some minds…

So mixed feelings at the end of the night. If Palm visit your town check them out, there is potential for great things here, yet to be realised.

In the Thrall of the Munten King: Lowlands 2017 reviewed 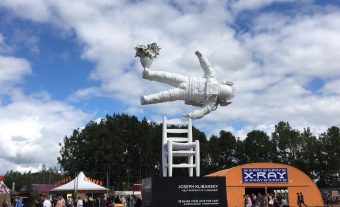 Boasting big names, chill vibes and its own amusingly-named currency, Lowlands is one of the Netherlands longest-running festivals. Mansoor Iqbal went to check it out...
Read More