Our round-up of June’s eleven best music videos finds Grandaddy enjoying a brush with the wild, Kendrick Lamar in his element, and some anarchy in the UK with All We Are…

All We Are – Dance (see above)

Director Eoin Glaister completes his All We Are trilogy with ‘Dance’, a very British tale of rural anarchy. It’s worth watching the first two parts, ‘Human’ and ‘Animal’, before launching into this, but even without knowing what’s going on, these rightly pissed off residents are still sure to entertain.

Mexican duo Deer are currently based in Hong Kong, so it makes sense that their new video for ‘In The Shadows’ is also set there. Moody blue filters and a variety of disorientating effects help create a distorted, engrossing vision of the region as the video’s somewhat menacing protagonist stalks its streets, subways and markets, before the band provide him with a new direction (and a snazzy mask).

Foo Fighters seem to be enjoying a minor critical renaissance in the UK at the moment, thanks partly to their well-received Glastonbury headline performance and partly to the fact that ‘Run’ has a bit more bite than most of their recent output. Not uncommonly for the Foos, however, the video trumps the track, as its starring cast of gnarled old geezers and geezerettes throw off the shackles of their care home thanks to the stirring sound of radio-friendly rock music.

***
Grandaddy – Brush With The Wild

We all need a shoulder to cry on during a particularly harsh break-up. Sadly Jonah Ray, the star of Grandaddy’s brilliant ‘Brush With the Wild’, doesn’t have one. He does, however, have the armrest of his ex’s trusty office chair, in what soon becomes a surreal version of David Lynch’s The Straight Story, but with an even more unconventional mode of transport.

I wasn’t a big fan of the first two singles from DARE., but ‘ELEMENT.’ is definitely one of the album’s strongest tracks, and thus deserving of one of Kendrick’s best videos. Much like his lyrics, there’s a lot to unpack in this beautifully shot montage of race, violence, masculinity, love and religion, and you get the sense that only its author would be able to explain exactly what it all means. Still, isn’t that the case with all good poetry?

According to director Malcolm Critcher, the video for ‘Break Them Shackles’ is, like the Lando Chill album it’s taken from, based on Paulo Coelho’s mystical novel The Alchemist. I’ve never actually read it, but if you have then you maybe able to detect hidden meaning in its desert scenery. For the rest of us, it just looks (and sounds) great.

Leeds electronic sextet continue their series of animated videos with this capital clip, created with the help of animator Sean Proctor. ‘Rush’ celebrates the band’s partial relocation to London, as a cartoon version of rapper Raphael Attar takes on the city’s overcrowded transport system…

A documentary-style music video so good that it’s worth sitting through a totally needless Talk Talk cover for. Shot in an electric waste dump in Agbogbloshie, Ghana, director Sasha Rainbow occasionally risks adding too much cinematic sheen to her subjects’ grim reality. Luckily, as with the photography of Edward Burtynsky, the imagery is artistically striking enough to reinforce rather than distract from the message about human growth and wastage that lies at its centre.

One of Radiohead’s great long lost songs finally sees the light of day. And, indeed, the dark of night. Director Colin Read switches between the two during one impressive ‘continuous’ shot, which contrasts the protagonist’s initially sunny disposition with somewhat darker events, until the two gradually converge as the tension mounts…

Romain Laurent conjures an intergalactic journey with a difference – the stars, planets and meteorites are made of bums, tits and pubic hair. Our protagonist certainly seems happy to boldly go where no man has gone before in this saucy space fantasy, while it’ll surely surprise nobody to know that both band and director are French…

Joël Vaudreuil creates an amusingly creepy series of animations with a touch of the David Shrigleys. It certainly fits the dramatic theme provided by Timbre Timbre’s Carpenter-esque track – a match made in hell, you could say.

Video premiere: Dakota Sixx & Isla Wolfe - I Got U 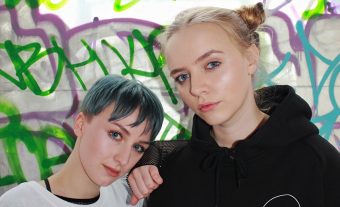 Dakota Sixx & Isla Wolfe's 'I Got U' is one of the most uplifting slow house jams you'll hear this summer, and now it has an equally euphoric video to match...
Read More