Six weeks of technical difficulties (see here) means that January’s collection of weird and wonderful music videos comes a little later than usual, while December’s didn’t arrive at all. As a result we’ve snuck a couple of clips from the tail end of 2016 into this eclectic and explicit edition of MPEGs XI, which features everything from Residente’s eye-catching abnormalities to Max Cooper’s mind-bending experiments. Enjoy…

As anyone who’s visited Japan can confirm, urban living quarters there can often be, in estate agent parlance, ‘cosy’. Oscar Hudson takes that idea to an extreme in his video for ‘No Reason’, a perspective-warping bit of music video magic that recalls some of Michel Gondry’s best work in the medium.

Everyone’s heard how Jimi Hendrix used to sleep with his guitar, right? Well Cherry Glazerr’s Clementine Creevy takes it a step further in the video for ‘Nuclear Bomb’, which begins with Creevy giving her Rickenbacker an intimate morning strum before heading out for a day of romance and a night of… well, you’ll see when you get there. Suffice to say the final shot gives whole new meaning to the term ‘skin-flick’. Bonus points for attracting apparently straight-faced #pizzagate comments on YouTube.

While the Cherry Glazerr vid flirts with the NSFW borderline, Christeene’s ‘Butt Muscle’ is so excessively lubed-up that it slides right over it, straight into a glorious pit of bum-based depravity. Both the visual and sonic aesthetics suggest a ménage à trois of Peaches, Mykki Blanco and Die Antwoord, but ‘Butt Muscle’ is more cheekily daring than all three. Although even then it’s not quite as filthy as that bassline…

I have no idea what animation technique Marseille motion designer Joseph Blanc used to create this, but the uncannily lifelike movement of the protagonists works superbly with the uncanny events depicted. The band may be called Dead Seem Old, but Blanc makes the dead seem alive.

There is something innately pleasurable about watching someone riding around on a Segway. Has there ever been a mode of transport so breezily effortless and yet utterly ridiculous? (Swan-shaped pedalos perhaps, but it’s a tight call.) Anyway, here you can enjoy a deadpan man called Mickey Sanchez riding from San Francisco to New York against a series of stunning backdrops, selected by director Brendan McHugh. (While you’re here, also check out the video to Delicate Steve’s ‘Winners’ – it may not have any Segways but it’s similarly uplifting.)

A name like Horse Massage promises many things. Good things. Weird things. Equine things. And in ‘The Missing Sucker’, a ‘Tiny Desk Concert’ recorded for NPR, Horse Massage deliver all three. A honking, chaotic, desk-destroying disaster that somehow staggers through almost eight minutes of increasingly shambolic anarchy, it’s also one of the most joyous things I’ve seen or heard this year.

In one video Idles manage to deliver a filthy brush bucket of scathing art criticism and get a load of skiving gallery invigilators sacked (probably). Efficient stuff. The track is ferociously catchy enough to survive comparisons with Billy Childish’s ‘Art Or Arse (You Be The Judge)’, plus you get to watch bassist Adam Devonshire titting about in front of some of history’s finest paintings, made even more amusing by the idea that he presumably had to do it all silently.

OK so this one is actually from December but it’s too good not to include. Maxime Causeret’s intricate response to Max Cooper’s equally intricate composition (itself a response to raindrops he recorded falling on his old skylight) is far too clever for me to sum up without missing the point, so head to YouTube to read the full explanation. I just like the pretty colours.

Puerto Rico’s Residente produces the month’s most bizarre NSFW video, which is no mean feat. Starring a Siberian throat-singing choir, a naked woman in an egg and a series of graphic births, ‘Somos Anormales’ (‘We Are Abnormal’) even comes with a positive political message. ‘The term “abnormal” allowed me to break the negative connotation of the word and make it into an inclusive term’, Residente explains. ‘If there is something we all have in common, it’s that we’re all different.’ True. Although we’re not all this different.

Another one that squeezes into this month’s column owing to last month’s technical difficulties. However, unlike the complex Max Cooper creation, this is a relatively simple concept that just happens to be executed hilariously well. Couple of the year? Reckon so.

We finish this month’s edition of MPEGs XI with the video you’re most likely to have already seen. Ah well, watch it again. The premise, whereby director Ryan Staake proceeds to shoot the video without the AWOL Thugger by following the rapper’s vague instructions, seems almost too good to be true. Could it have been inspired by Wiley’s infamous ‘Wearing My Rolex’ shoot? No matter. Like Lost in La Mancha, the story of how the production falls apart is far more entertaining than the original idea could ever have been… 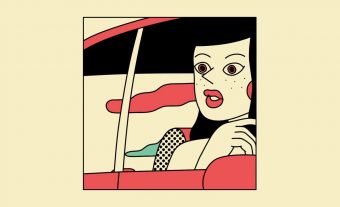 Stick your eyeballs on the best music videos of recent times, including the adventures of Francobollo's pube pal and Coco Banana's cartoon car crash...
Read More