It is absolutely no surprise that German pianist Volker Bertelmann – also known as Hauschka – was into hip-hop, Seattle grunge, and stage-diving in his youth.

Ever heard of a prepared piano? I hadn’t either – and I studied the piano for 12 years. The definition is more of an umbrella term than a specific designation, but essentially, here’s the recipe: stick a bunch of crap around, underneath and in between the strings of a piano. Sheets of paper, metal screws, scraps of leather, aluminum [sic: Zoe said she’d kill me if I changed this to the correct spelling – Ed.] foil around the hammers, tambourines threaded between the strings. Anything goes. Chuck a load of vibrating dildos in there if you like, stuck in the ON position for extra reverb.

Presto: you’ve got yourself a prepared piano.

The history of the technique is worth far more words than this has space for, but in short, consensus goes that Maurice Delage (1879-1961) desired a piece of cardboard to be placed under a B-flat string in order to imitate the sound of an Indian drum. A few other composers toyed with the idea of altering the world’s most sacrosanct instrument, to various effects. Eventually John Cage (who else?) arrived at the conclusion that by affixing just the right mix of nuts and bolts to the strings of a piano, he could create the illusion of having a percussive section in the studio alongside what actually was a solo musician.

In Cage’s words: “To place in the hands of a single pianist the equivalent of an entire percussion orchestra … With just one musician, you can really do an unlimited number of things if you have at your disposal an exploded keyboard.”

Any musician that attempts the prepared piano is in for a tough task: either messy, headache-inducing noise art, or – if you place the scraps of cardboard, plastic cups, and paper plates just right – giving a quotidian piano a new life and a new voice. Taking a traditional instrument out of the stuffy realms of the classical genre and into the edgy realms of the eccentric innovators.

And as prepared pianists go, I’ve never heard better than Hauschka – and having a unique sound with a piano is a tough task. (Sidebar: In line with his idiosyncratic ways that are probably clear to Bertelmann alone, “Hauschka” is a sly reference to an 18th century Bohemian composer as well as a range of vegan skin care products.)

Hauschka’s latest, What If, keeps in line with his previous work: complex, dark, mournful, and at times, angry. Never fluffy.

As succinctly as I can put it, here’s a track-by-track summary:

‘Constant Growth Falls’: One of the most mechanical of the album’s tracks. If I was rumbling along a railroad with an alien playing a xylophone next to me, it might sound like this.

‘My Kids Live On Mars’: Taking the energy down a notch, the third track’s distant, plunky, tappy quality feels like the transmissions of a satellite that wants to tell you it loves you, but doesn’t know how.

‘I Need Exile’: A desperate, haunting loneliness that seems to rely on mathematical regularity to stay upright. Nearly all of the tracks on this album have something hypnotic about them. Yet this one, with swirling refrains and repetitions that seem like they could (and probably should) never end, outdoes them all. It may be the most conventional piece, but it is undeniably my favourite: well-delivered, mournful and delicate.

‘I Can’t Express My Deep Love’: In an incessantly mournful series of techno-piano laments, this is the by far the saddest and the least technological. Haunting, it’s somewhat easy to forget what happiness feels like if you get too caught up in the left hand’s timeless chords.

‘Nature Fights Back’: The catchiest. A kickass bassline, and the only track on What If? that makes your feet subconsciously tap. “The instruments and sonic shards come together in a riotous, clanging, clamour of celebratory sound. Like from the bowels of the earth. As if from the gut of the instruments.” Who wrote that? Me. Sorry. My bad. At first listen, I jotted down notes. This description makes me feel ashamed at how up my own ass my words are. But upon re-listening… it is fair. I shall own it. ‘Nature Fights Back’ comes from the caecum of the piano, and it is all the better for it.

‘Familiar Things Disappear’: Out from the bowels, up to the stars. Back to the space-age effects, twangs and high-pitched machine-like squeals. A Victorian mechanised contraption breaking apart. Comfortingly mechanical.

‘Trees Only Exist In Books’: Springs and cogs bursting from a broken clock. At first, ploddingly slow. Then a thrumming, rushing, desperate, almost suffocating crescendo.

‘We Live A Thousand Years’: All of it at once with a tone that makes you feel like it’s all going to be OK. The mechanical clockwork twangs? Sci-fi bleeps? Alien xylophones? Satellite transmissions? Believe it or not – they can all come together. And work.

It is painfully cliché to describe the piano as a “timeless” or “universal” instrument, due to its ubiquity and versatility. But clichés exist for a reason: they are usually true. The piano remains the bedrock of formal musical education, which is rather curious considering the size, weight, cost and complexity of the beast.

A grand needs an entire room just for storage. An antique requires as much care and upkeep as an aged relative, constantly creaking out of tune, incessantly demanding retuning. Just ask my parents, who bemoaned my 1920s Heintzman Toronto ivory-keyed upright, a grumpy but soulful old crank that required expensive retuning every four months just to stay upright.

One would think a simpler instrument – the violin or, I dunno, the recorder – would have formed the foundation for formal music education. Something small, transportable and cheap. Also, with today’s tech – where you can reproduce an entire orchestra with a computer the size of a pamphlet – it would be easy to imagine the piano would long ago have been relegated to the rigidly conservative, narrow-minded and intransient realm of classical music alone.

Thankfully, this is not the case – recent years have seen a consistent profusion of instantly recognisable and undeniably idiosyncratic masters. Minimalistically adorable Nils Frahm. Gentle and quaint Goldmund. Bombastically omnivorous Chilly Gonzales. Even with every modern tech at their disposal, some choose to use the most basic musical tool in the book to show that something sonically original is always possible. And always moving. Large it may be, but for technical reasons, the piano is special for possibly one reason alone: few instruments boast a range of notes so broad.

Hauschka is in a select few – but even in that inner circle, there is something undeniably unique about him. I have a Spotify playlist titled “Infuriated Rumination”, for those moments when I need to crank the volume to 11 and inwardly fume over something that’s ruined my day. Among Nine Inch Nails, Ministry, LFO, Over The Edge’s cover of Bjork’s ‘Enjoy’ (sweet Jesus if you don’t know it, put it on now and turn it up). Angry, loud, discordant, impassioned, heady fare.

But there is only one musician on that playlist who could be described as anything other than techno, metal or industrial: Hauschka, a floppy haired, intellectual German classical musician. Track: ‘Elizabeth Bay’, from the album Abandoned Cities. It ricochets from every sonic corner with angry, almost incoherent intensity, which makes quite the contrast with his nerdy frame sitting upright in a stereotypically sensible Teutonic fashion in the video for the track. Liberace he is not.

Getting back to the original point: it is not surprising that Hauschka was into stage-diving and grunge in his youth, which you can hear from his own lips in this interview. Spoiler alert: being an interview with a German pianist, it is slow-paced, even-toned, highly intellectual, and overly-detailed to a fault. Which actually makes the contrast of Bertelmann’s square voice with his anarchic music all the more intriguing.

“There was a lot of darkness – distortion, reverb – in ways that stuck with me. I was fascinated with using the preparations in the same way as old records. In a way the piano disappeared in a cloud of forgotten space – it sounded like a piano played under a carpet.”

It’s adorable that he thinks his music sounds like an instrument muffled under a carpet, because if I was his promoter, I’d put him centre stage in a thundering techno warehouse. With subwoofers.

Hauschka plays at Village Underground at the end of this month. I hope they mic the place to the max. 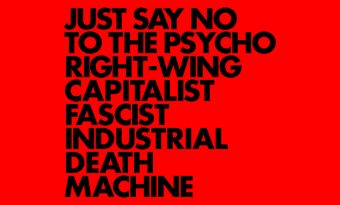 Gnod return with the noisy, abrasive and righteous 'Just Say No...', quite possibly the band's most powerful record to date...
Read More