Hello my dear friend, confidant, comrade. I write to you at a stage in 2017 where we are socially and politically in a very precarious position. With the upcoming election and on-going ‘Brexit’ deal, things have the potential to go a wee bit pear-shaped over the next few months; and by ‘pear-shaped’ I mean ‘really fucking tits up’.

Now, that might not be your fault (maybe it is) but whether or not you choose to involve yourself in politics you can still make a difference, the world doesn’t have to go down the shitter. We can still make things right by making the right choices, and Gnod are here to offer up help and advice.

Gnod have always been a band to push the listener with their music, but this time round they also provoke with a title that is as stark and antagonistic as the music within – deep breath here – Just Say No To The Psycho Right-Wing Capitalist Fascist Industrial Death Machine.

If you think that’s a mouthful try typing it out. Which I will do, in full, throughout this review. No corners cut on my part, Gnod deserve the full typed-out treatment.

Having released the sprawling and experimental labyrinth that was 2015’s Infinity Machines (an intense album that resembled a broken concrete mosaic of humanity re-constructed in musical form), Gnod then set about paring back their sound for 2016’s fierce Mirror, showcasing a direct approach that more resembled their live shows.

If you thought Gnod sounded big and tasty on Mirror (and you did) then you’ll bloody love Just Say No To The Psycho Right-Wing Capitalist Fascist Industrial Death Machine. This is Gnod at their most musically aggressive and raw.

As its subtle title suggests, Gnod are angry. As angry as Nigel Farage at a British ale and tweed gilet convention where all of the ale and tweed gilets have been replaced, last minute, by continental lager and silk-knit cardigans. This fevered vitriol seeps through every sinew and pore of Just Say No To The Psycho Right-Wing Capitalist Fascist Industrial Death Machine‘s five tracks.

Opener ‘Bodies For Money’ comes out from its corner swinging for the face and balls with a flurry of muscular audio-wallops. It’s a fiery punk pounder, its simple riff repeated over and over like a pummelling pugilist and its drums crashing back and forth like a punch-drunk flesh-ball.

Vocalist Paddy Shine shouts: ‘Bodies all over the place, but still they want your money, they can keep the fucking money’ in a pleasingly gruff Manchester accent. The fogged howls of guitar that close the track show that even in their ‘straighter’ moments Gnod still like to pepper their tracks with wigged out, glutinous mind filth.

A sinister bassline drags itself through the intro of ‘People’ like a ravenous peeping tom lurking around the darkened windows of the sleeping innocent at night. It slowly hauls itself through anxious post-punk guitars to a threatening and cavernous middle that sounds as dark and inescapable as a disused well in an old, long-deserted mining town.

This is all before the track explodes like a hydrogen bomb that tears all of the aforementioned imagery to pieces and scolds the mind that created them.

Following this eruption is ‘Paper Error’ which starts with a far more swinging, upbeat sense of lightness. Still sounds right fucked off though I might add. I don’t think the song’s about a photocopier problem either.

‘Real Man’ references The Fall’s ‘Hip Priest’ and includes more menace than an issue of The Beano. The whiplash drumming, scratchy guitars and muck-sodden bass will kick seven shades of plop out of your ears. As Shine sarcastically raps ‘he’s got cauliflower ears and a bag full of beers, always in a plastic bag, ‘cos he’s a real man’, you get the feeling Mark E. Smith would approve (well probably).

The big-hitting finale of ‘Stick In The Wheel’ insistently grooves and writhes with a wicked wiggle until halfway through it inverts itself and becomes a crashing cacophony of drumming and paranoid guitar scraping that then morphs into a wistful and ghostly mutation of warped jazz-rock, a hushed jam that closes the album with a sinister whisper.

Noisy, abrasive and righteous, Just Say No To The Psycho Right-Wing Capitalist Fascist Industrial Death Machine is quite possibly Gnod’s most coherent and powerful record to date (which is saying something with a back catalogue as good as theirs). It sees Gnod at the height of their ability, looking to preach their noble gospel of sound-mangles to the brain-slackened masses.

If you do not join the converts at the congregation then expect a sharply worded talking to next time I see you. 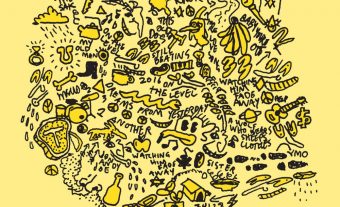 Mac DeMarco's world-weary new album may not be as immediate as previous efforts, but the openhearted lyrics lend renewed intimacy to his songcraft...
Read More