It’s Russian Circles’ first UK performance since the release of phenomenal sixth album Guidance. I last saw them two years ago touring their breakthrough album Memorial at the Islington Assembly Hall. My defining memory of that night is being absolutely hollowed out by the transcendental post-rock thunderscape carved into my ears. So, considering they recently delivered one of the strongest records I’ve heard in years, my expectations for this evening are undoubtedly high.

Backlit to lilac and orange spotlights, the Chicago trio take the stage to an ambient organ loop, and as guitarist Mike Sullivan commences the lush finger-picked intro to opener ‘Asa’ I peer out through the pink-light glare at the audience around me. I am instantly struck by the variety of band tees on display this evening. From just a swift scan I can see The Cure, Oathbreaker and Godspeed You! Black Emperor. It is only now when re-reading my notes that I realise what an apt cross-section of taste indicators this is.

Throughout their six albums Russian Circles have become well schooled in the art of wielding the crescendo. What sets them apart from other post-rock luminaries is the force with which they execute the peaks of their steady builds. The emotion, force and atmospherics of these journeys more than stand alongside the aforementioned bands. What follows ‘Asa’ this evening is a textbook delivery of outstanding post-rock.

Back in 2015, Islington Assembly Hall’s sound engineer successfully recreated ‘Memorial’s’ mix to a tee, each instrument heard in crystal clarity but with the guitars taking centre stage. It was genuinely impressive. So as the band progress into ‘Vorel’ and Dave Turncrantz’s booming tom-assault surges through the throng it becomes clear that tonight is going to be different: it is going to Turncrantz’s night. This realisation manifests itself physically as I join the crowd in a moment of Tourette’s like profanity. ‘Oh fucking hell.’

As the song reaches its midway half-time zenith and looming bass player Brian Cook bangs his bearded skull, I get a flashback to 2015. I am overcome with a surge of euphoria, one that can be felt across all genres but is perhaps especially marked in those that employ the half-time drop. Along with my synchronised headbanging, my face involuntarily contorts into some weird scrunched up fish-pout. This is not some contrived bollocks for Instagram, this is happening against my will and just as I did back in 2015, I absolutely love it.

Next up Memorial’s standout track ‘Deficit’ buzzsaws its way into the crowd. Again the drums are absolutely huge, I’m almost remorseful that the album wasn’t mixed like this. With the crash cymbal up-lit by some freak orange reflection it’s as if Turncrantz is trying to smash a flying saucer to pieces before it dips below the sunset. This onslaught continues through Empros’ ‘309’ before making way for Guidance’s centrepiece ‘Afrika’.

Evoking the whale-breach cinematic of early Sigur Ros, Sullivan’s tremolo-picking ushers in the first steps of Russian Circles’ trademark climb. As the toms swerve in and Brian Cook’s guttural bass initiates act two, the band execute the swell with sniper-like precision. Rather than contort, this time my face just sighs. ‘What an absolute tune.’

When a band has six stellar albums under their belt it affords them the luxury of assembling a set of standout songs. This evening that luxury is embodied in the final third of the set. ‘Harper Lewis’’ bass-rut guitar-tap bludgeon leads into Memorial’s most operatic moment, ‘1777’. From here Sullivan’s tapping returns to the fray with another of Guidance’s many summits, ‘Mota’.

The night closes on a welcome heavy note with colossal set-staples ‘Mladek’ and ‘Youngblood’, the latter’s crushing chug-gallop volley proving that there’s a reason why Russian Circles are so beloved in the beardier corners of this evening’s attendance.

By bringing Dave Turncrantz to the fore tonight, Russian Circles and Heaven’s sound engineer demonstrated that, not only are the Chicago trio purveyors of lush cinematic audio-scapes, but when it comes to bringing the heavy they really can mix it with the best of them.

U Want The Scoop? The Garden's reputation grows at Scala 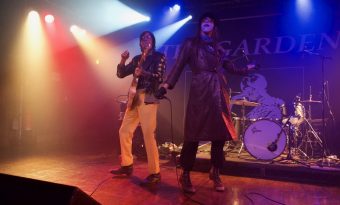 The Garden's controlled chaos and disdain for genre is better than a punch in the face - although you might get one of those as well...
Read More