Ten years ago, Lake Como quartet Push Button Gently were frequently to be found in a noisy basement, banging away on cardboard boxes (in lieu of an actual drum kit, not just because they were angry). Listening to their latest album, the masterful ‘Cause, hammers home just how far they’ve come since those early days. The band’s adventurous songwriting is still ear-pleasingly apparent, but the textured sonic shell around it makes for the most beautifully packaged Push Button Gently release to date.

Combining the mercurial style of Portland’s Menomena with a subversive love of rock akin to Deerhoof’s latest work, the tracks on ‘Cause parry and thrust like a particularly muscular fencer. Inviting you in with the ticklish indie rock of ‘Hurkah’, you’re soon sucked into the spiralling distortion of ‘Me And The Giant Set Off’ and the imposing ‘Mexican Standoff’, which features a riff ‘n’ melody combo Josh Homme would be proud of.

Other highlights include the super furry backing vocals of ‘Morning Sailor’, the mournfully epic, Albarn-esque ‘Holy’ and the brilliantly titled, wonderfully wonky lead single ‘I Thought I Saw A Pussycat (But It Was A Lion, So I Ate It) ’. (Well, we’ve all been there, right?)

There’s no need to take our gob-smacked words for it though, as we have an exclusive preview stream of the whole damn thing below, just waiting for you to push the play button (gently of course) and release its many delights. Which you should do riiiiiiiiiiight…. now:

‘Cause by Push Button Gently is being put out by Moquette Records, who’ll be more than happy to sell you a copy when it’s released this Friday. Buy yourself a copy, and you can be assured that your money is, quite literally, going towards a good ‘Cause… 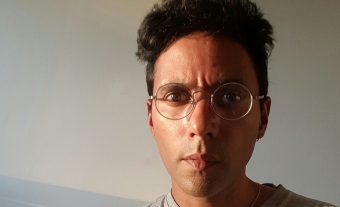 Immerse yourself in new music from former Hey Colossus guitarist Kreol Lovecall, who plays his debut show at the immense Unity all-dayer this Sunday...
Read More