In a world where music has become over-saturated and musical careers short-lived, bands like The Growlers and The Garden manage to give their audiences unique perspectives and have gained followings who will surely help them stay afloat. When I saw that they were touring together and would be playing in my new hometown of Seattle, I didn’t hesitate to add their show to my calendar and try to convince my friends to go see them with me.

I don’t know what it is about two-piece bands but their performances are always so powerful, and have a lasting impact on me more so than that of larger bands. Perhaps less is more, which is truly the case for The Garden who are one of the best live bands I have seen in 2014. Composed of twin brothers who play drums, bass, and sing, they are very uninhibited on stage, making weird faces to the music, taking turns crowd-surfing, and doing their signature ‘vada vada’ dance. I recommend looking them up on Youtube because it’s something you just have to see to really understand.

They started their set with a handful of their short punk songs like ‘The Apple’ and then they both ditched their instruments to rap to backing tracks for songs like ‘We Be Grindin” (think Death Grips). I’m pretty sure they left the Seattle kids wanting more when their set was over. 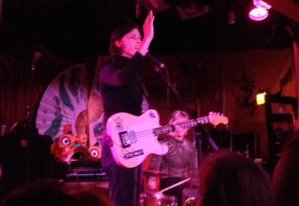 The Growlers were up next but apparently they now tour with a tiny cross-dresser named Tina. I was not expecting this and I’m still thinking to myself: “WTF?” Tina was a total train wreck: she dropped her mic, tripped over wires, and someone even pulled off her wig so she performed the rest of her set without it. I did find it somewhat entertaining when she smashed a guitar onstage though, because I have never witnessed that in person. But overall she was a hot mess, and I was relieved when she announced that The Growlers would be coming out.

It is no secret that The Growlers work really hard to give off their ‘beach goth’ aesthetic. Considering their new album is called Chinese Fountain, I’m wondering if it was intentional or coincidental that they were playing at a venue called Chop Suey that is decked out in Chinese décor.

Either way, I found it amusing. The Growlers don’t do anything particularly crazy onstage but front man Brooks Nielsen tells stories through his crooning singing style, which makes the experience of seeing them live feel like a step back into the past when cellphones didn’t exist and people actually paid attention at shows. If you are over 21, I recommend standing towards the back at their shows though, otherwise you will be up close and personal with rowdy teenagers and groupie fan-girls. One girl asked me if I had ever seen them before and then proceeded to brag about how she had seen them in San Francisco, LA, Tennessee…. I’m not really sure what she was trying to prove. Anyways, I braved the kiddie crowd for the beginning of their set in which they played ‘Waves in the Water’ and ‘Gay Thoughts’ but when they got to ‘Naked Kids’ it became unbearable: So. Much. Pushing. I joined the mature crowd at the back so I could leave the show relatively unscathed. 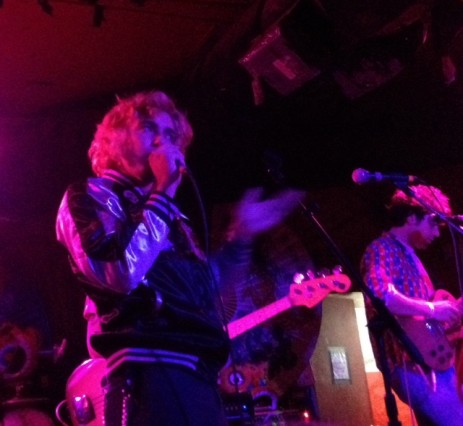 You know a band is good when a bunch of dudes are dancing like no one is watching, and this is what was going on at the back. Then Tina came out for ‘Humdrum Blues’ and dove into the crowd, climbed onto pipes in the ceiling and slid down a pole that was not meant for strippers (security wasn’t happy). As it got later, they started busting out their songs in order to play as many as they could before their time was up. When they played ‘People Don’t Change Blues’, I couldn’t help myself from taking up space on the dancefloor and then continued dancing to ‘One Million Lovers’ and ‘Chinese Fountain’.

Unfortunately, I had to leave at midnight so I didn’t get to see the end of The Growlers’ set. They performed a total of twenty songs while I was there though which is more than a lot of bands play for their entire set. I feel quite satisfied with the overall experience: I got to see some very cool vada vada, a cross-dressing catastrophe, and some bluesy beach goths. How many other gigs will give you all that in one night? 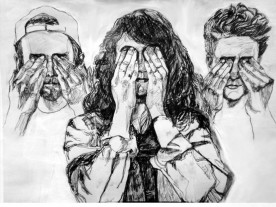 A band with bags of potential, playing a quite mesmerizing set on probably London’s final balmy evening of the summer of ‘14.
Read More