Back in the nineties there was a common misconception that the French couldn’t ‘do’ music, like the idea that no one can name five famous Belgians, or the inability of most people to mention anything involving Germany without using the adjective ‘efficient’. However, beyond the casual xenophobia, these statements are just plain wrong; I personally know some very inefficient Germans – inept even – while there are five members in dEUS alone. Yet neither of those statements carry less truth than the one aimed at our cousins across the channel.

Which is probably why we don’t really hear it so often these days. Not only has the mainstream success of acts like Justice, Phoenix and Daft Punk given a Gallic flavour to our radio airwaves, but a quick scan of Discogs reveals that the stock of French music has never been higher. From elder statesmen like Serge Gainsbourg and Jean Michel Jarre to the weirder fringes occupied by the likes of Magma and Space Art, people are lapping up French music like a fine Bordeaux.

The popularity of French radio in the UK is another indicator; a surprising number of people I know regularly tune in to the likes of Fip and French Radio London, and the music scene there seems as strong as it’s ever been (some of our favourite recent discoveries include Armure and Animaux Surround, while we can’t wait for Chapelier Fou’s new album too).

Yet despite all this, it can still be difficult for French acts to get exposure in the UK, which is why tours like Oui Love exist. Jointly run by French music export office bureauexport and the Institut Français (you know, the guys with the really cool cinema in South Kensington), it’s basically like a school exchange program but with more music and less pubescent awkwardness. Choice French artists are matched up with local British counterparts as they embark on a voyage across the nation, painting the land a new type of red, white and blue.

This year’s line-up may be the strongest yet, with two outstanding French artists performing five dates across England and Scotland, with local support at each gig. First up is Andrea Balency, an impossibly slinky Franco-Mexican singer/producer who combines the sonic depth of FKA twigs with the pop sensibility of Jessie Ware, while her pedigree is confirmed by the presence of sound engineer Stephane “Alf” Briat on mixing duty (he’s previously worked with French music royalty like Air and Francoise Hardy). With Gilles Peterson already providing exposure (see above) and Mount Kimbie due to appear on her forthcoming debut album, there’s no doubt that this is the start of big things for Balency both over here and beyond.

Alongside her will be prog-friendly three-piece NLF3, formed by brothers Nicolas and Fabrice Laureau. Initially a hardcore band, the addition of a drummer called Mitch has seen them exploring more experimental territory, and their synth-led, prog-friendly Three Dances EP suggests that they’ll make for compelling live listening. With influences running from Sub-Saharan percussive techniques to Krautrock avant-gardism, we don’t know exactly what to expect but we know it’ll be damn tasty.

Check out the full list of dates below, and keep your eye on the Oui Love Facebook page for more information. Magnifique. 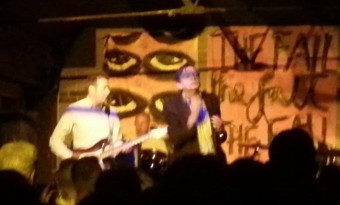 Still wonderful and frightening after all these years, Mark E. Smith fixed the punters of York with a death stare when The Fall rolled into town...
Read More