Football and hip-hop have always had a distant and awkward relationship. On paper they are polar opposites, each involving very different personalities, and if TV and school have taught us anything they would have us believe that two camps exist. Football culture has its stereotypical alpha male/athlete lacking in intelligence, wallowing in ignorance and obsessed with their body, whereas music generally attracts the cool, artistic, outsider, sensitive types. However, both camps originate from humble beginnings and have more in common than you would think. From their inception, they’ve offered a way out of their harsh environment for inner-city youths. Many of the leading players in both fields have escaped their surroundings and at a young age have become professionals who earn millions a year from contracts and sponsors.

Hip-hop differs from other music genres as it is an art form and culture in itself, and has always been competitive in nature. It started in the ‘70s and blossomed throughout the ‘80s with graffiti writers, breakdancers, DJs and MCs battling each other to showcase their talents – gaining the respect of their peers & the public in the process. Both hip-hop and football started in parks with similar social gatherings, and made use of simple practicalities when facilities were lacking. Football games involved jumpers being used for goalposts, while hip-hop block parties in the park involved people grouping their resources, with turntables and microphones being powered using streetlights as their electricity sources.

Hip-hop parties moved onto the club scene, then onto bigger & bigger venues as its popularity spread beyond New York at a rapid rate during the ‘80s. With this expansion, traditional elements of the culture got pushed aside by record labels in favour of the spotlight shining brightly on rappers, as albums started to regularly sell in the millions during the ’90s. Around this time the introduction of the Premier League, with its lucrative sponsorship from Sky Sports plus the introduction of all-seated stadiums, changed the atmosphere at grounds into a more sedate affair. The working class fans that had previously been the most ardent & vocal supporters were now being priced out of attending games by a significant rise in ticket prices.

As both professions have seen their stock rise, the presence of major labels, artist managers and football agents with shark tendencies has increased tenfold. Their exploitation of the lack of education and proper legal representation received by naive young men, who are either blinded by the promise of material possessions thrown at them or accept terms and conditions that are the equivalent to slave labour (especially in major label record contracts), had turned hip-hop and football into a profitable game of pimps and hoes for savvy businessmen.

In the words of one of hip-hop’s greatest groups: “Cash rules everything around me”. These words started to ring more true as the ‘90s progressed. Premier League clubs made hundreds of millions in revenue from pre-season tours in emerging football markets/nations (especially the USA and Asia), ever-increasing sponsorship and merchandise money, and owners from overseas heavily invested in clubs, increasing the league’s popularity around the world exponentially.

At the same time, the emergence of Death Row Records saw its flagship artists Dr Dre, Snoop Dogg and Tupac Shakur dominating the radio and charts. Hip-hop had started to replace rock music as the rebellious voice of the youth and became the most lucrative genre of music for major labels and advertising companies to tap into. The rise of east coast rappers such as Wu-Tang Clan and Notorious B.I.G. challenged the west coast’s dominance of the hip-hop world, and the mostly media-hyped frenzy that ensued helped escalate a friendly rivalry into a dangerous feud that contributed to the deaths of two of its brightest stars.

The two unsolved murders in consecutive years of Tupac & Biggie left a gaping hole in the hip-hop community. In the aftermath of these tragedies, with the exception of the Dr Dre & Interscope-backed Eminem, major labels dropped controversial acts and distanced themselves from any rappers associated with violence or aggressive lyrics. Puff Daddy emerged from the fog with a safe, clean, sample-heavy sound that appealed to the masses, and it was no surprise that Jay Z scored his first big hit around this time with ‘Hard Knock Life’, based on a sample from the popular musical Annie. It was also the start of the “bling bling” era, as rappers started to show off their material gains (regardless of whether they were owned or rented) more ostentatiously than the big chain wearing pioneers Slick Rick & Rakim had done in the past.

Meanwhile, even the most mediocre footballers were getting paid more than ever thanks to the trickle-down effect of Sky Sports and huge endorsement deals, on top of vastly increased wages. Image now meant more than ever in both professions as the media and major corporations looked for family-friendly, clean-cut, non-threatening entertainers and athletes such as Missy Elliot and David Beckham to promote brands. Athletes were dressing like rappers, while rappers, having always had an association with sports brands such as Adidas, were now starting to endorse everything from Sprite to KFC.

The growing number of reality and talent shows on TV has shone a light on how intense and desperate the race to become the next celebrity icon has become, and has developed into a marketing and publicity machine for the judges. As every movement a popular rapper or footballer makes or says is documented on TMZ, Twitter or blogs, sponsors are more aware than ever of their brands being given a bad name by the misbehavior of the people they’ve invested in.

Premier League footballers and popular rappers have both come under fire for similar reasons. Two recent cases in hip-hop saw Lil Wayne & Rick Ross losing sponsorship deals from Pepsi and Reebok due to controversial lyrics on the subjects of civil rights icon Emmit Till and MDMA-induced date rape respectively. Although not as direct, a recent Nicolas Anelka goal celebration was deemed to be anti-Semitic after he replicated the ‘Quenelle’ gesture made popular by comedian friend Dieudonne, who is now banned from performing in France and entering the UK. The incident led to him being suspended for five games and his team West Bromwich Albion losing the sponsorship of the Jewish co-owned property website, Zoopla. Freedom of speech has its price regardless of your occupation.

Money has become the dominant factor, and consequently rappers and, to a larger extent, footballers have lost some of their edge. Media training has become compulsory with clubs anxious for their footballers to stay out of any controversy. Consequently, interviews are even more sterile, cliché ridden & boring than before. In contrast, most rappers crave attention and many have gone out of their way to play up an edgy/gangster persona. Whether they actually lived what they rap about has become irrelevant, as courting controversy and fabricating beefs with other rappers are tried and tested marketing schemes that continue to boost record sales.

Since the late ’90s, supremely talented, eccentric, fiery characters such as Eric Cantona have retired early or are now in danger of being completely alienated from the game due to ongoing racist abuse (Mario Balotelli). Today, contracts and loyalty in football tend not to mean much as players can use agents to agitate for moves regardless of contract length, or if that fails, effectively go on strike in order to force transfers. Oil-rich clubs have sprung up across Europe with enough financial clout to ensure every player has its price, and consequently the gap between the haves and have nots has widened to its largest point in football history.

The seeds of player power started with the introduction of the Bosman ruling in 1995. The ruling stated that players could run down their contracts and negotiate with other clubs, helping gain themselves far more lucrative contracts and causing their clubs to lose potential transfer fees in the process. However, this ruling has been taken advantage of by bigger clubs in the football food chain who can offer more lucrative wage packets to compensate for the lack of transfer fee involved.

This development drew parallels with the role of the internet in the music industry. As independent artists became frustrated with industry politics, and bootlegging became more widespread thanks to file-sharing websites such as Napster & Limewire, alternative ways to reach the public and make money from music by cutting out the middle man were presenting themselves online. The advent of digital technology made studio equipment cheaper and easier to use and the ability to gain an audience through social networking and sell music through iTunes & Bandcamp gave artists the creative & financial freedom they craved. But, much like their football club superpower counter parts, major labels retain the vast resources to control the movement of smaller hip-hop labels and supersede them.

As the playing field levels for artists and athletes in their respective fields, the spotlight shines on them brighter than ever. Increased scrutiny from politicians as well as already high-profile media coverage has resulted in increased gossip column inches focusing on everything but their talents or positive things they may do. To an extent both Premier League footballers and successful rappers have lost touch with reality, and alienated the public in the process. In the increasingly 1984-ish, hypersensitive society we live in – it’s probably best advised for them to, in the words of Walter White, “tread lightly” in the future.

Fela, Fitness and Urban Farming - An Interview with Dead Prez 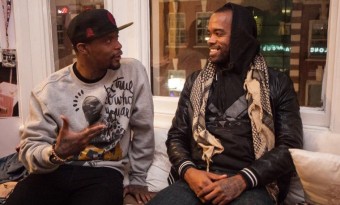 As they made clear in 'Let's Get Free', for Dead Prez it's always been bigger than hip-hop. M1 and Stic.man talk politics, vegetarianism, martial arts, Bob Marley and more...
Read More