Rewind back to 2009, when MySpace was still a thing – somewhere in L.A., composer & arranger Miguel Atwood-Ferguson was cooking up a tribute to a recently deceased producer/musician/rapper who continues to influence and inspire creative types across the globe.

The person in question is James Yancey, aka J Dilla, a rare talent responsible for changing the sound of hip-hop and R&B a number of times during his short career. Ferguson, also a multi-instrumentalist, took on the monumental task of re-interpreting selected Dilla productions with a 60-piece orchestra and a rhythm section that included bass virtuoso Thundercat.

The results were nothing short of mind blowing and transcendental. This writer was lucky enough to see an early screening of the concert and was especially moved by the warmth and soul transmitted from the stage to the audience in a way not felt since the heyday of John Coltrane and Marvin Gaye.

Fast-forward to 2017. On a humid evening in early July at London’s KOKO, Ferguson has handpicked a small orchestra and band to recreate a fresh selection of Dilla tracks for a sparsely populated, dedicated audience. The set list varies from their triumphant Barbican performance at the London Jazz Festival back in November, and the effect is just as mesmerising and stunning in its execution. 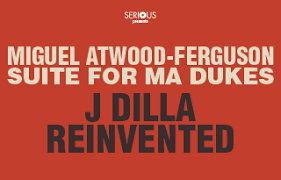 Opening with A Tribe Called Quest’s ‘Find A Way’, complete with sublime flute and horn & string section interplay, the tone is perfectly set for the waves and crescendos of aural bliss that follow. The journey takes the attendees through the many different branches’ of Dilla’s diverse production tree, adding new layers and extended passages as the lines between hip-hop, jazz and classical are well and truly beautifully blurred.

Gorgeous harp plucks are scattered throughout as new interpretations of classic Slum Village and De La Soul tracks enthral – in particular ‘Jealousy’, where the wild time-signature swing that follows the scat jazz intro really is something special to witness.

At the heart of it all is the endearing passion of the violin-wielding Ferguson. His animated playing and conducting adds a level of theatre and uplifting energy befitting the occasion. Original samples are also given a welcome airing – a blistering take on the breakbeat classic ‘Scrabble’, which formed the basis of one of Dilla’s finest (and most controversial) solo moments (‘Fuck The Police’), proves to be one of many highlights.

After a joyous rendition of ‘Fall N Love’ brings proceedings to a close, those filtering out into the muggy streets of Camden can be heard waxing lyrical about one of the finest gigs in living memory. Somewhere above the clouds, James Yancey watches & nods in approval.

Hanging with Portico Quartet at Archspace 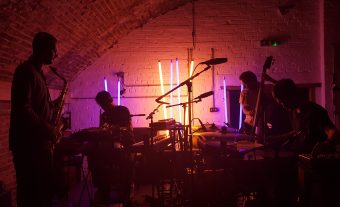