A little over a year ago, I’m flipping through a borrowed programme for the End of the Road festival. As usual, I don’t know many of the bands playing, and a lot of what I do know is ‘not my kind of music’, whatever that means. One thing sticks out though: the word ‘Pinkunoizu’. It turns out I’m mispronouncing it, but the way the sound rolls around the mouth is enough to make me think they might be worth checking out, to the extent of actually aggressively championing them to the hungover trail of chaos I like to call ‘my friends’.

We go and watch them, and they cut right through the traditionally limp EoTR vibe with a knife of hypnotic post-something rock. They are on early, play a too short set, but everybody wanders away hoping for more of that later on (they probably don’t get it – The Dirty Three are the only band to make more of a mark that weekend).

Cut to the present, and I’m watching Pinkunoizu on stage again. Closer this time, and with a lot more context than a name they don’t like talking about. I’ve played ‘Everything is Broken or Stolen’ from their first EP during numerous numinous DJ sets, and had a chance to listen to their (stellar) new record The Drop. I think I know what to expect. The album is a tumult of textures, drifting and shifting from one to the next. The band sound like they should be described using all of the prefixes anyone has ever applied to the word rock. They are post-groove-synth-psych-acid-yacht-surf-prog-kraut. So many prefixes that I think they’ve almost left the rock itself behind.

They come on stage and create a drifting organ drone intro, which immediately sends one irritating gentleman at the front of the stage into a new age convulsion. He writhes obnoxiously, but it turns out he’s ahead of the game. Once the guitars slot into their groove, the drummer puts away her synth and the beat kicks in – we’re watching sound build, out of nothing, into something genuinely exhilarating. 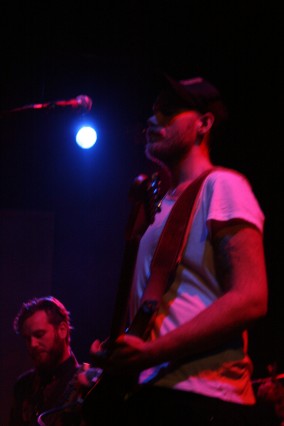 They only have half an hour, and play three or four songs (depending on whether that particular change in tone was a new song or the advent of a second half). The sound isn’t quite as stylistically varied as the album, but also appears to be a totally new take on the songs. It slowly builds out of the simplest grooves and into something that almost feels like metal. Cantankerous riffs and biting lead fight each other, before suddenly leaping into a more grungey, backfeeding mash.

The band know their parts, and toy with them wildly. The drummer is exemplary; providing an immaculately tight, brutally funky spine for rest of the band to swoop around, whilst still looking like she’s having actual fun with it. The music feels raw and inventive, the playing is faultless but full of improvised energy. A structure of nods and gestures allow them to shift slowly from state to state, and it works, coherently, all the way.

The writhing man enjoys it, and after they finish there’s that buzz of a room of people that got a lot more than they were expecting. It wasn’t even what I was expecting; I expected a drift of pleasing textures and I got a bitesize metallic freakout. I expected to be entranced and actually got a bit of a dance out of it.

I feel bad for giving so little space to Tunng, the main act, but I do feel like it should have been a reversed bill. The band look like a roll call of acoustic open mic night cliches; I was expecting alternafolk, and was bemused as to how the enduring impression I had was of a remarkably accomplished ’80s pop outfit, maybe with a hint of U2 stadium guitar.

It’s hard to not make that last sentence sound like a damning one, but I don’t want to damn Tunng at all. The tones don’t meld as well as they did for the support, but it still successfully mashes together varied tones into something new. The drum pads collide with the acoustic guitar, knocking the synth in one direction while the vocal harmonies try desperately to hold it all together. Every part is well played and pleasing.

But the elements just never quite becomes part of a whole, and it feels a little self conscious. It’s the musical equivalent of borrowing your brother’s suit for an interview. You probably look quite smart, but it’s not ever going to make you feel at home. 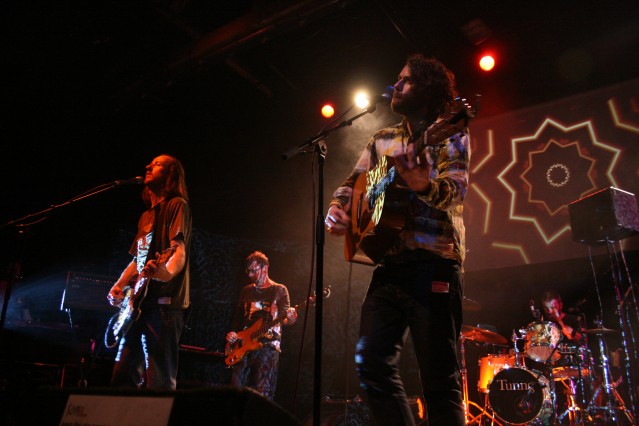 But for at a night of colliding musical textures it works, and I reckon people that aren’t me are probably delighted by the bright, open sound; unique enough to intrigue, without quite breaking any boundaries. The grins on stage are endearing, and it’s always nice to see a band having fun together, but I do spend most of the set thinking of the earlier band. 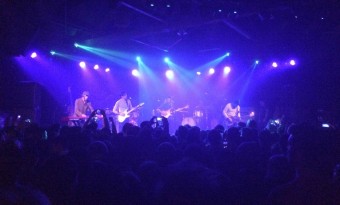 Was this a gig, or 'Story Time with Isaac Brock'? Modest Mouse split opinion straight down the middle in Los Angeles...
Read More