I wasn’t sure what to expect of Modest Mouse’s show at the Glass House. I’d seen them in 2009 at Outside Lands Music Festival, where they seemed disengaged and I wasn’t really feeling it. But then I saw them headline Sasquatch! Music Festival’s 10th Anniversary in their home state of Washington, where they opened with ‘Shit Luck’, and it became one of my favorite memories. As these past experiences had taken place at large music festivals, I wondered how seeing them at an 800 capacity venue would compare.

Apparently I wasn’t the only person there who didn’t know what to expect, as the crowd consisted mostly of long-time fans in their mid-twenties to early thirties, standing around discussing different times they have seen them and trying to guess which song they would open with. One girl mentioned ‘The Whale Song’ and her friend gave her a look like, “yeah, right”. We were starting to get antsy when their techs were still on stage setting up, 20 minutes past the time they were supposed to go on. Finally the lights went low and we heard sounds of rain. The excitement started buzzing and people began cheering.

Fast-forward to ten minutes later and we were still listening to that stupid rain track and the stage was still empty. People were getting annoyed and I almost started to regret the fact that I bought one of their shirts. But they then showed their faces, and singer/guitarist Isaac Brock, clad in a black-and-white striped shirt and black beanie, started to mime. We forgave them (and that girl was right, they did open with ‘The Whale Song’). 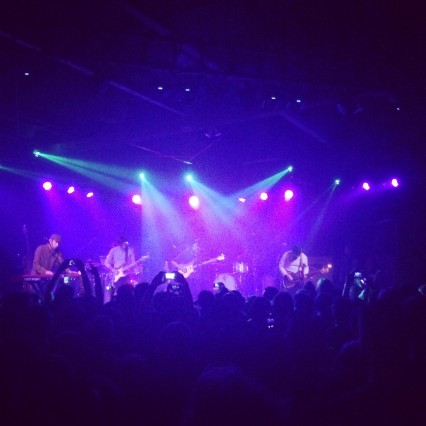 Before I go any further, I must point out that Modest Mouse shows tend to be half music and half ‘Story Time with Isaac Brock’. The Glass House show was full of story time. It started with Brock telling us about how he kept seeing his tech trying to hand him a guitar and couldn’t figure out why, until it dawned on him that something must be wrong with the tuning. As he was tuning the guitar he introduced the rest of his band, which we thought was supposed to be a nice gesture but then he threw them under the bus saying “every f***ing one of them has a mic they could be talking into while I’m tuning this”. We laughed, and he started to play ‘Ocean Breathes Salty’.

Midway through the set, someone in the audience held up a sign. I can’t confirm what the sign actually said but I assume it was asking them to play ‘Doin’ The Cockroach’, because he then started talking about that song and how he hates taking requests. Then he went into a ten-minute story about how he sees this homeless military-looking guy with a sign every day on his way to the studio. Then one day this hippie kid shows up, and the military guy gets territorial and tells him he gets 15 minutes and then he has to move on. But Brock sees the military guy there every day, at odd hours, and he never moves from that spot…

Did I lose you? Yeah, I think he lost us too. After playing ‘Dark Side of the Universe’, he shaped his hair in the fashion of Danzig and started yelling “What do you f***ing wanna hear?” and said they could be Joan Jett and the Misfits because he loves her so much. And while he never played ‘Doin’ the Cockroach’, he did end up taking a request when someone asked for ‘Cowboy Dan’. Although before he could play it, the horn player would have to “tune his shit like a nerd with a fancy instrument.”

When they played their last song, ‘Devil’s Workday’, Brock blankly told us there would be an encore, but a lot of people ended up leaving before they came back onstage. I think the encore was the best part of the night though, and it didn’t include any stories. They started with ‘Interstate 8’ and ‘All Night Diner’, played a new song, ‘Shit in Your Cut’ [what a title! – Ed.], and ended on a perfect note with ‘Dance Hall’ and ‘Tiny Cities Made of Ashes’. I find Brock’s stories and comments to be endearing so this show was a hit for me, but there were clearly a lot of people in the crowd who were not amused, especially since they didn’t play ‘Float On’…

Nicolas Jaar and the Joshua Light Show: A Product of Stoned Age Technology 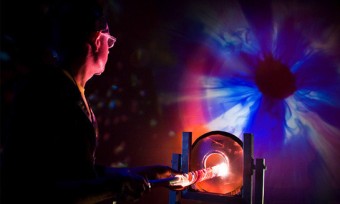 Cutting edge music meets vintage psychedelic visuals at the Barbican, and it's one hell of a colourful collision...
Read More