It’s always fun when you recognise places you know in music videos, which is one of the many reasons we loved Francobollo’s Finsbury Park based ‘Basketball’ last year. This debut video from Tense Men, a ferocious three-piece comprised of members of Cold Pumas, Sauna Youth and Omi Palone, is an immediate win for me as it follows the route I sometimes find myself taking while walking my flatmate’s dog [/exciting life].

Admittedly, this alone won’t make it particularly interesting for anyone who isn’t familiar with the streets of Stoke Newington, but luckily there’s a little more going on than simply a stroll past the back entrance of Egg Stores. Shot entirely in reverse, the band’s Oliver Fisher is nonetheless seen moving forwards throughout, showing an exemplary talent for walking backwards (I did have a horrible feeling he was going to come a cropper on the stairs, but no, negotiated faultlessly). The technique works really well even when there aren’t cars and passers-by contradicting his direction, as it gives him a lolloping gait that seems almost like he’s been crudely animated.

The up-tempo, repetitive rhythm and flashes of guitar are as intense as the stares between the bandmates as they lock eyes over a table while sharing a couple of oddly-coloured concoctions. Ever seen a man turn into an egg? You have now. I’ll never look at Cazenove Road the same way again. And I’ve found the perfect new dog-walking soundtrack too…

The Last Skeptik - I Hate June 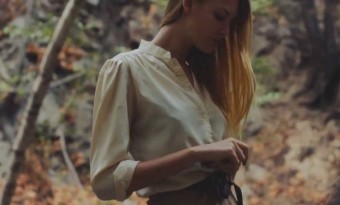 The latest Last Skeptik video seems like an idyllic tourism advert at first, but it has a chilling resolution...
Read More