First, an update on our lead story last week (mainly, it should be admitted, so we have an excuse to post the above picture): Universal’s attempt to take down a sweet, harmless blog celebrating Peanuts and The Smiths may not go as smoothly as expected. Last week the Tumblr’s creator, Lauren LoPrete (understandably despondent about her legal chances against such a huge corporation) seemed to be giving up the ghost, uploading a post stating ‘I Know It’s Over’. However, as news of the takedowns spread, a bunch of lawyers apparently got in touch with LoPrete insisting she had a strong case and offering their services. You can read Booth Sweet LLP’s letter to Universal below. It’s an excellent response, aside from the fact they should have titled it ‘Universal, It Was Really Nothing’… 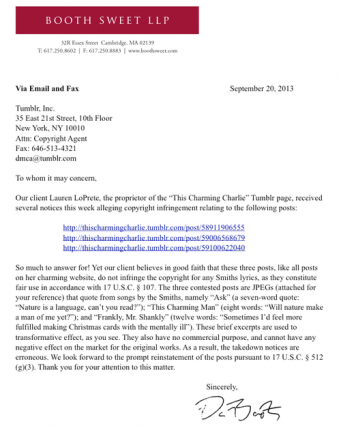 More significant campaigning against copyright infringement has been taking place at the Houses of Parliament this week. The Culture, Media & Sport Select Committee has criticised the government’s failure to properly implement the piracy section of the 2010 Digital Economy Act, claiming it’s “costing the creative industries millions of pounds with serious consequences for the wider economy”.

Google also gets short shrift from the committee, who reckon the company’s search engine isn’t doing enough to stop pirated material coming up in its searches. “We are also unimpressed by Google’s continued failure to stop directing consumers to illegal, copyright infringing material on the flimsy excuse that some of the sites may also host some legal content. The continuing promotion of illegal content through search engines is simply unacceptable, and efforts to stop it have so far been derisory”. While there’s no way of ever stopping internet piracy, it does appear it could be made more difficult for casual downloaders and the non tech-savvy…

Google weren’t singled out in our recent investigation into things that are more of a threat to the music industry than Spotify, but tax-dodging online retailers like Amazon certainly were. And it seems our views are shared by the people at Ethical Consumer, who this week reported Scottish folk music retailer Doug Anderson’s prediction that independent record shops in Britain will be dead within three years (thanks to taxresearch.org.uk, an invaluable resource when it comes to British tax avoidance issues, for bringing the story to our attention).

While it may be a somewhat dramatic claim (although things are doubtless tougher for niche music shops), it does highlight the unfair pricing advantage over independent shops that Amazon holds thanks to its market dominance and tax avoidance. “Shoppers compare independent record stores like us us to Amazon on price which is a completely unfair comparison,” compains Anderson. “We make no profit to speak of but we pay tax and VAT on everything we buy. Do people seriously think that Amazon are good guys and will keep their prices cheap when they’ve no competition? When the last store closes prices will shoot up and people will then have no choice but to shop at Amazon”. You tell ’em, Doug. His complaints only formed the second-most vitriolic rant of the week though. That accolade goes to veteran Canadian post-rockers Godspeed You! Black Emperor, who celebrated winning the Polaris Prize (Canada’s equivalent of the Mercury Music Prize) by, er, launching a righteous diatribe against it. In a statement posted on the Constellation Records website, the band acknowledges both the support and the fact that “musicians’ blues are pretty low on the list of things in need of urgent correction”, before stating their three main issues with the event:

“-holding a gala during a time of austerity and normalized decline is a weird thing to do.

-organizing a gala just so musicians can compete against each other for a novelty-sized cheque doesn’t serve the cause of righteous music at all.

-asking the toyota motor company to help cover the tab for that gala, during a summer where the melting northern ice caps are live-streaming on the internet, IS FUCKING INSANE, and comes across as tone-deaf to the current horrifying malaise.”

They then suggested that the next event be held in a “cruddier hall”, and said they’d be using the money to set up a programme to provide musical instruments to prisoners in Quebec. Righteous indeed, although it would’ve been quite funny if they’d spent it on luxury cars instead. Toyotas, perhaps…

Godspeed seem to have an ally (in the loosest possible sense) in Madonna, who launched her Art for Freedom Initiative in New York this week with an unexpected Elliott Smith cover, which you can watch below. What next, Miley Cyrus covering Jason Molina to raise awareness of rendition?

It’s fair to say that many people have been cynical about Madonna’s political grandstanding in the past, but not as cynical as people seem to be about Bono. The U2 singer revealed how he was forced to “run for his life” from German anarchists when he attended the G8 Summit (where he was giving a TED talk about being an “insufferable jumped-up Jesus”). “Make Bono History,” was the protestor’s cry. We can see that catching on.

Now for some sad news: Sheffield’s premier heavy rock lords Wet Nuns announced a split today. However, much as they have done throughout their 4 year existence, they made the announcement as uncompromising and entertaining as possible. The statement in full:

“Wet Nuns was a joke we started in the summer of 2009. We never thought we’d do much more than play a couple of the pubs in and around Sheffield. There’s personal things going on in and out of the band that has rendered it an increasingly stressful and negative entity to be a part of. In short, our four year long joke isn’t very funny anymore. We’re sick of the sight of each other and the band is imminently to cease to exist. The upcoming UK jaunt, now retitled the ‘Death Tour’ will be the last time Wet Nuns ever play live. We realise that this now renders all our dick drawings worthless, but hey, at least we’ll never make a shit album!”

If you attend their final tour, be sure to pick up a t-shirt and help them repay the debt they’ve accrued over the last few years. As they say, “we would like to retire without fear of having our homes repossessed”…

And finally, some even sadder news: Albert Hammond Jr. reckons their could be “10 more Strokes albums” on the way. Can’t they just unmake the last three instead? 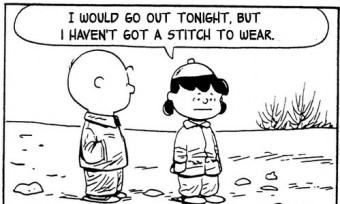 Universal get into a Panic over Peanuts/Smiths crossover, the legal woes of Kim Dotcom and Sky Ferreira, riots in Greece over murder of anti-fascist rapper, and Idris Elba reveals Gallagher beef...
Read More