As someone who’s worked in a second-hand record shop for several years, I can tell you that people who are obsessive about sixties music are often the most boring, dribbly-lipped morons you could hope to have mouth-breathe all over you while flicking through the racks (their breath usually smells like rotting Decca seven inch sleeves, in case you’re interested).

However, every now and then someone comes along who has channelled their love of that much masturbated-over decade into something sublime. Frank Maston is one of those people. His taste, based around the touchstones of Brian Wilson, The Beatles, Joe Meek, Phil Spector & Burt Bacharach, may have never made it much further than Altamont on the musical timeline, but rather than mould those influences into a charmless pastiche like so many before him he’s created something that really does sound like a lost relic from the era.

And not one of those “lost relics” that are listed for a hundred quid in Record Collector but sound like a stoned San Franciscan shitting on a tambourine either. His new album “Shadows” is an absolute beauty, and could hold its own against the heavyweights of that time. Expanding on some of the ideas hatched on his early cassette EPs (which in Maston’s case feels like a pretty futuristic format; it felt a bit wrong buying the bloody album on CD to be honest), the imaginative instrumentation and analogue recording gear provide that much sought-after “authenticity” in abundance.

The variety of sounds here is all the more impressive when you consider that Maston plays everything (save a single harp part) himself, taking the time to identify what created certain sounds on his favourite records and then learning to play those instruments from scratch. So far so Tame Impala’s Kevin Parker, but unlike the celebrated Australian, whose records still have something of a modern sheen to them, you get the impression that if Maston had been around in the sixties he’d have created the EXACT same record.

It kicks off with ‘Strange Rituals’, a carnival waltz complete with hammed-up organ stabs and drunken brass, similar to Beach Boys curios like ‘Three Blind Mice’ or what the Doors might have knocked out when Jim Morrison’s bloated ego wasn’t around. Elsewhere, ‘Looks’ creates that ambiguous atmosphere of the best sixties psych, sweet and sinister at the same time like a beautiful trip that is only a bad tab away from turning into a nightmare, with some beautiful vibraphone laid on top of a clip-clopping beat.

He must share a few favourite records with Daniel Rossen and Bradford Cox too, as ‘Messages’ works with the same beautiful melodies and harmonies as the Department of Eagles/Grizzly Bear man, while ‘Judge Alabaster’ feels like a less Tramadol-ed Deerhunter. There are elements of Maston’s beloved Van Dyke Parks and Ennio Morricone in some of the arrangements too – he’s claimed he’s “gone months listening only to Morricone’s “Diabolik” score”, which is a pretty fine tutorial for any music-maker.

Sometimes, when selling another sixties freak three separate copies of the same Beatles record just because they have different matrices, I feel like screaming at them: “Why don’t you try something new?! You don’t have to transport yourself into the 21st century straight away, but at least move on a decade or two! Try something by The Fall, or Grandmaster Flash, or Blondie, or just bloody anything that isn’t “Forever Changes” for once!”

However, in Maston’s case I’d say the opposite. Stay there. Stay there in your sunny, paisley-shirted Californian time-capsule and keep producing this brilliant music. Seriously, if I ever see anyone give this guy a synthesizer I’ll fucking shoot them. Play on, brother. 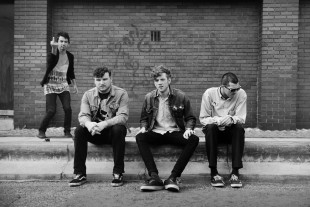 Every now and then NME choose a punk band to endorse that they reckon is reasonably digestible for their sheltered readership (Gallows, Fucked Up, you know the ones). Right now FIDLAR are that band - but don't hold that against them. The young L.A. four-piece have received a similar endorsement from the normally punk-wary Pitchfork too, with the caveat that they're not doing anything particularly original. Which is fair. They're not. But when you're writing raucous, lairy tracks about getting wasted, the important thing is to do it with conviction, and despite the fact that they appear to be permanently stoned, conviction is something FIDLAR have in abundance. This is extremely important. I was in a very short-lived punk band once. Our first (and last) gig was at a small festival in Surrey, and by the time we went on most of the band had heavily indulged in various pharmaceuticals which had rendered us barely able to play, apart from the bassist (he just didn't turn up). We were, predictably, awful, although we did achieve the punk goal of causing a hippy to run into the woods while plaintively sobbing "why are they so angry?". Still, the experience left me with some idea of just how hard it is to stay tight as a band when chemicals have caused your brain to begin oozing out of your own nose - and FIDLAR are certainly tight. They have the pefigree after all. Greg Kuehn of notorious Long Beach punk band T.S.O.L. sired half of the band's members (Elvis and Max), who were opening for bands like Circle Jerks when they'd barely reached pubescence. Meanwhile, Zac Carper was just about holding down a job in Elliott Smith producer Rob Schnapf's studio (where he frequently snuck in to sleep) and Brandon Schwartzel was messing around with a hip-hop project formed primarily as a means of obtaining free booze (although he did narrowly miss out on a 2 Live Crew support slot). They finally formed FIDLAR around a shared love of hedonism (the name stands for a friend's skating motto, "Fuck It Dog, Life's A Risk") and a shared suspicion of bands that just did whatever was currently considered cool, which at that time was political posturing. As Schwartzel put it: "you’re fucking 16 and live with your parents in a nice suburb of Los Angeles. Like, what are you really pissed about?" Instead, FIDLAR write about what they know, which is why their debut album, released this week, is awash with song titles like 'Cheap Beer', 'Wake Bake Skate' and 'Cocaine'. There are two reasons why this doesn't get as boring as it usually does when someone tries to impress you with how many drugs they take. 1) They do it with an irrepressible energy and 2) They show the darker, more pathetic side of it too - the moments of shivering loneliness, of being unable to pick yourself off the floor, of pulling over the car you're drunk-driving so you can vomit your life away. What initially sounds like a meatheaded celebration is often a pretty honest assessment. Perhaps the main reason for their crossover appeal is that, despite being raised on bands like The Descendents and eventually admitting their love for Blink 182 after denying it throughout pubescence, they actually sound more like Wavves or Ty Segall, sharing a love of catchy melodies and surfing with the former and, like Segall, a tendency to sharpen rather than smooth their edges. Their best songs betray a knack for awesome hooks too - 'Wait For The Man' is a shout-along stormer, 'Blackout Stout' is a surprisingly moody slice of surf-rock, and 'Stoked and Broke' is a boisterously anthemic, beer-spilling barnstormer, like Titus Andronicus with a sense of fun. However, they're not really bothered about their wider appeal. "Not everyone is meant to like this record," is how Schwartzel has shrugged off criticism, insisting that the band "don’t give a fuck about what anyone else thinks, or what people want us to do, or what music is cool right now that people think we should be making". Perhaps their wreckless, carefree attitude is simply a product of their environment. As Schwartzel has pointed out: "Every other city seems to hate on L.A., but everyone in L.A. is like, "whatever." They don't hate on anyone else". So whether you like FIDLAR or not, there's no point telling them. They don't care about your opinion. They care about their music. And as long as that continues to come across in their records, so will we.
Read More