Charli XCX assembles a cast of pop culture’s Y-chromosome-possessing great and good (and a bloke from The Courteeners) for the playful, buoyant video for ‘Boys’, where the fun of pointing out the fellas you recognise is matched by the ways in which she inverts the male gaze. As a mate put it on Facebook, “Nice to see a music video celebrating/lovingly objectifying the male form”.

Matilda Finn directs a video with all of the surreal, drug-soaked invention of Danny Brown’s Atrocity Exhibition album, which has apparently lost none of its potency since its release last year. ‘Lost’ finds Brown cooking up a storm with some expensive ingredients in a woozily claustrophobic trap house, with Finn’s lens swimming in and out of focus throughout.

Muta Bor Studio embark on a bizarre safari in this beautifully animated video for Colombian collective De Juepuchas. The theme would appear to be the evolution of humanity’s distorted relationship with nature, although whatever’s going on it sure looks purty…

In which Feist finds herself facing off with her double (played by Maria Doyle Kennedy) and a ‘Thriller’-worthy back-up crew. Perfectly shot and choreographed, the Jarvis Cocker cameo is the grizzled cherry on the cake.

One of the highlights of any trip to Reykjavik is a visit to the Red Rock Cinema, a tiny theatre where an elderly man called Villi Knudson presents thrice-daily screenings of archive volcano footage filmed by him and his late father. The footage in ILK’s ‘Somer’, edited by the band’s Tom Fisher, was produced by French volcanologists Maurice and Katia Krafft, but it’s just as dreamily dramatic as Knudson’s archive, and indeed the band’s music.

Not being a Tidal subscriber, I still haven’t heard Jay-Z’s latest album. ‘The Story of O.J.’, based around a low-key sample of Nina Simone’s masterful ‘Four Women’, is evidence that it contains at least one good track, but it’s overshadowed by its brilliant, and sadly pertinent, video. Revolving around racist stereotypes in classic thirties cartoons, it follows ‘Jaybo’ on a bleak but creative tour of the track’s themes.

The lyric video is usually just a lazy way to squeeze some cheap extra content from a single campaign, so credit to Muse for doing something a bit more interesting for ‘Dig Down’. Using an AI tool to crawl hundreds of hours of television footage for words featured in the song, it offers a new combination of clips every time its played. Admittedly most people who aren’t hardcore Muse fans won’t actually watch it more than once, if that, but it’s a neat idea.

Matt Barton came up with a canny solution when asked to devise a video for Panoram’s ‘The Question’ – he spliced together footage of people’ being interrogated on television. Without hints as to what each question featured in ‘The Question’ is, we’re left with a curiously compelling sequence of human reactions to being put on the spot, ranging from bemusement to defensiveness via a couple of iconic moments (although sadly not this one).

It took me a second to realise why this video seemed so familiar. Turns out it’s filmed on the Parkland Walk in North London, where me and my dad used to see if we could cycle from Crouch Hill to Finsbury Park without pushing the pedals on his bike (we had about a 50% success rate). Suffice to say we never encountered ‘Fuggler’ on our travels; and more’s the pity, as the charmingly grotesque creature proves an excellent guide to such sights as the skate ramp where my mate broke his arm, the bushes where several poor sods were brutally beaten by a homophobic gang, and the underpass where I once got mugged by a local ne’er-do-well called Mo. (It’s nicer these days, honest.)

The video for Run The Jewels’ ‘Nobody Speak’ collaboration with DJ Shadow won all the plaudits last year, but this stop-motion treat beats it on all counts. Join Killer Mike and El-P as they ride a Run The Jewels ghost train through all the worst aspects of urban gentrification and a justice system that has seen its scales tipped by mighty wads of cash… 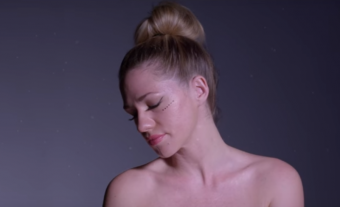 Check out the slick, sensual new video for 'Nape' by The Left Rib, a highly charged exploration of human desire and corporeality...
Read More