I last saw Ghostpoet as he delivered an excellent set of music to the Shepherd’s Bush Empire in November, 2015. The performance he delivered that night suggested that Shedding Skin was both an album title and a statement about where Ghostpoet was with his music. Certainly, the man’s mix of midnight confessionals and Mezzanine-era Massive Attack guitars had hinted at a man who had found himself a winning formula. It wasn’t too much of a surprise, then, when he teamed up with Massive Attack themselves for the atonal but excellent ‘Come Near Me’ last year.

I basically think of Ghostpoet as a man who has barely put a foot wrong since his debut album, Peanut Butter Blues & Melancholy Jam. I was therefore looking forward to album #4, Dark Days + Canapés, with almost no thought of a potential disaster in the offing. It therefore gives me great pleasure to report that Dark Days + Canapés is superb.

I listened to the album on repeat about three times after my first listen. I then thought I should have a break and delved into some Let’s Dance era David Bowie, but found fragments and snatches of Dark Days… bursting through the Bowie shield and burying themselves in my brain.

The opening gaaaasp, drum and bass coming on like a panic attack and distorted vocals exclaiming “When I am in here my sins they are forgiven” which make up ‘One More Sip’ are a slightly disorientating opening.

Things don’t get much easier thereafter; although amusingly, ‘Many Moods At Midnight’, a title which could almost function as another mission statement, begins with the words “We’re alright”. It also features a piano reminiscent of ‘Our House’ by Madness and sees Ghostpoet singing “Let’s stay together / I’m down on my knees / Howling at the moon / Scratching at your ear”. And, because this is Ghostpoet, he also throws in his trademark, “Nah nah nah!”

That theme of communication breakdown, people not listening, people not being heard continues on ‘(We’re) Dominoes’, a fractured sonar bleeping away as Ghostpoet implores, “Can you please it explain to me? / We had it all, now we’re dominoes, fall like dominoes… I’m lost in the crowd while I scream out loud”.

The mood darkens further on ‘Freakshow’ as Ghostpoet heads off to Westfield on a shopping trip, only to find “all these side eyes are leaving me paralysed”. Beginning with the sound of a drill – on the street? In his head? – ‘Freakshow’ is one of the few uptempo tracks on the album, although the lyrics are anything but feelgood. That won’t stop you walking around singing “It’s a freakshow!” to yourself though.

‘Karoshi’ sees Ghostpoet muttering “To the grave, to the grave… fighting for what / Bloodshed and winning for what” over a prowling bassline. When he tells you, “I feel weak”, it’s not a surprise. But it will sound head-splittingly awesome when he plays it live.

After so much trauma, ‘Blind As A Bat’ finds our hero in a more reflective, resigned mood. A spare, cycling bassline allied to a yearning guitar and strings sees Ghostpoet dreaming of palm trees whilst his chips are drenched in the rain.

For me, the centrepiece of the album is ‘Immigrant Boogie’. The second it kicks in with its descending guitar riff soooooo reminiscent of the Massive Attack live show since 2003, I feel a shot of adrenaline straight to my heart, Vincent Vega style. The subject matter, a boat trip gone badly wrong for our titular immigrant, marks this song out as a spiritual cousin to the Bristol collective’s ‘Atlas Air’. A notion not entirely dispelled by the whirring crescendo we build to.

And then what happens, just when you think this album can’t get any better? The loping, looping ‘Woe Is Meee’ trundles along and as Ghostpoet intones, “As the night draws in/ We’re all seeking love”, Massive Attack’s Daddy G, strolls in, skins one up (presumably), drawls out a rap and – wait a minute, was that Daddy G? Yes, yes, it was and now he’s gone.

I’m not ashamed to say that this song had me grinning like a Cheshire cat to the extent that it even now totally dwarves the closing ‘End Times’.

Reading this back, it is possible that you may read this and think that Ghostpoet has created the most depressing album ever. It’s not like that. Genuinely. I know a title like ‘Trouble + Me’, which quotes the riff from Radiohead’s ‘Street Spirit (Fade Out)’, probably doesn’t help my cause. However, the instrumental textures here, warm keys, gentle basslines and soothing strings, are woven throughout the album. You reach the point where, even as Ghostpoet rages at the world around him, you feel like you’re being wrapped in a warm embrace. 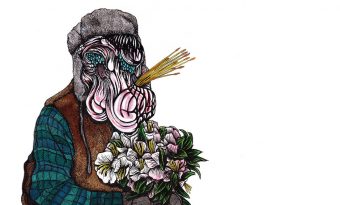