Sunnier weather may now be with us, but let’s look back to eight of the EPs that kept us out of the cold in 2017’s second month, including heartwarming releases from Onry Ozzborn, Steve Lacy and more…

Like having musical engine flush pumped into your ears, Astro Zu’s The Temple EP will bring sparkle and clarity back to your tired, greasy brain. Fleet of foot and full of them there future beats, the title track is an invigorating piece of work, operating at a high tempo but never feeling less than self-assured. It’s music for a future utopia that we’re apparently lucky enough to have been gifted early.

B-Side ‘Deathray’ is a little less vibrant but pulls back from the contrasting apocalypse its title might suggest, as the lightness of the synths are given some extra texture with just a touch of distortion. However, it’s ‘The Temple’ you’ll keep coming back to whenever you feel the need for a cerebral MOT.

‘Lavalike’ isn’t the most obvious way to describe the latest record by L.A. artist Dakota Blue. His songs are cool and composed, recorded with a real sense of intimacy and restraint. Indeed, on the delicately spaced out ‘The State of Things’ he sings of ‘An ice cold wave that’s on top of me / It’s enough white snow, that’s all I see’. However, in the way that his sounds seem to slowly flow, gradually oozing out of his guitar, you can kind of see how the title fits.

However it’s the songs, not the title, that will stick in your head. The leisurely rumble of ‘Blueprints’ recalls the melodic wistfulness of Elliott Smith and Mac DeMarco, while ‘Tropical Dust’ is carried along on a breeze of Daniel Rossen harmonies and lo-fi beats. Then there’s ‘Distant Disco’, a dreamy instrumental which we actually premiered on The Monitors last year – it sounds no less delicious now than it did then. It may not be explosive, but Lavalike has a warmth all of its own.

The word doesn’t translate exactly from Portuguese, but ‘Ficante’ seems to mean a sort of ‘friend with benefits’, someone you might snog but aren’t expressly in a relationship with. Fun but not overly serious in other words, much like Drae Da Skimask’s latest EP. A big departure from the Londoner’s previous releases, especially when it comes to BPM, Ficante exists in a hyper netherworld somewhere between Brazil and Chicago, where the party is perennially peaking.

‘Vai’ is the ultimate opener, a juking cocktail of pitched up raps and hallucinogenic pads that will immediately fire up the blood. ‘Why U Mad’ almost matches it thanks to an inspired reshaping of Mr Fingers’ classic ‘Can U Feel It’, while ‘Can U Help Me Find the Exit Please’ sees Gil Scott-Heron flipped in similar fashion. ‘There’s No1 We Can Blame’ and ‘The World Is Yours My Dear’ provide the closest links to the smoother sounds of Drae Da Skimask’s earlier work, but even here the footwork filter puts them in stark relief. If Ficante only proves to be a one-off detour from his original styles, it’s a more than worthy one.

Mixing the rampant dramatics of Kate Bush with the earthy passion of PJ Harvey, Linnea Olsson’s ‘Hall Of Tragedy’ is the sort of song that makes you want to chuck your laptop into the sea while wailing at a weeping sky. Unfortunately I can’t afford such wanton abandon at the moment, which is just as well really, as the repeat listens I’ve given this mean I’d be perennially queuing up at PC World for replacement laptops. Seriously though, what a song.

The rest of the Swedish cellist’s For Show EP might not induce as extreme a reaction, but it has its moments. The way the vocals wend their way skywards on ‘Gone’ for instance, or the way ‘The Boat’ heaves with a tense, quiet chill. ‘The Lonely One’ whips things back up into a real tempest though, utilising Olsson’s cello and knack for dynamic shifts towards a stormy accelerando and a final burst of fireworks. Like the deepest scar, For Show is for keeps.

Hailing from Sydney, up and coming producer Mookhi has a sound so crisp you could bag it in foil and sell it in packs of six. Or, in the case of her debut EP Lost & Found, four. A quartet of tracks, clocking in at just under nine minutes, is all she needs to put down a template that should bring her plenty of success in the not-too-distant future.

‘Lacunae’ lets you know what Mookhi is all about straight away: a kaleidoscope of sounds and samples gently breaking against a clear, tranquil shoreline. ‘More Tea?’ is equally refreshing, a dainty serving of shimmering chords with a sample from A Room with a View on the side. ‘So Sushi’ even manages to make the tinkle of broken glass sound inviting, while closer ‘Call It’ is probably the most fully-formed track on the record. Lost & Found shows Mookhi’s music doesn’t need to be slotted into a conventional structure though – the smallest nuggets here are often the most glittering.

This release by Seattle-based rapper Onry Ozzborn is more an album than an EP, but it whirls by so swiftly I’m chucking it in here anyway. With a style sure to ensnare anyone who hoovered up the catalogues of Rhymesayers, Def Jux and Anticon back in the day, the buoyant production from Boston producer Rain provides the perfect backdrop for Onry Ozzborn’s lyrically nimble ruminations on the search for love.

There really isn’t a bad track among the nine on offer here, but a few numbers do stand out. ‘They’re There’ is one of them. Alison Baker’s backing vocals contrast nicely with Onry Ozzborn’s rapid patter, with production bubblier than someone blowing into their milkshake with a straw. ‘Bed Bugs’ jockeys at a similarly perky BPM, before ‘Birfday’ sees Ozzborn deliver a cyclical rhyme form over a dreamy, Daedelus-like beat. c v p ii d is then brought to a reflective close with the emotionally open ‘He Means Well…’. I don’t know if Onry Ozzborn’s motives have ever been brought into question, but he delivers well too.

Syd may be the one perennially in the spotlight but Steve Lacy deserves just as much credit for The Internet’s success. Now the guitarist/producer, who also manned the desk for Syd’s recent solo album, has put out this mix of demos, although suffice to say a demo produced by Steve Lacy sounds a damn lot better than your standard 4-track offering.

While the likes of ‘Looks’, a luscious downtempo funk snippet, have a slightly rough-hewn quality (in a Ariel Pinkish way), there is nothing throwaway here. ‘Haterlovin’ has a Gonjasufi-style grittiness, ‘Dark Red’ is as velvety as the title suggests, and you won’t be able to get ‘Ryd’ out of your head for days. The sweet ‘Some’ rounds things off, and happens to be the only track to peep its head over the three-minute mark. Less is clearly more in Lacy’s world; the audience is left wanting more in any case.

Presumably this has nothing to do with the underwhelming film of the same name, although who wouldn’t want to see a Bond title with this as the soundtrack? A bright and breezy bit of braindance on Dutch label Voyage Direct, it has me imagining Daniel Craig being spiked with psilocybin and talking to trees, unable to answer M’s increasingly concerned calls because he’s in the middle of a giggling fit.

The mellifluous title track is a bobby dazzler and no mistake, seeming to drift ever upward on the gentlest of breezes. ‘Earth Rise’ is unsurprisingly a lot bassier, although still far from heavy, featuring acid pararhythms tumbling over a thudding kick drum. With a couple of DeNiro remixes on the flip (seriously, what’s with all the film references?) there’s plenty of value in this offering, but it’s that deliciously uplifting opener that deserves your immediate attention. 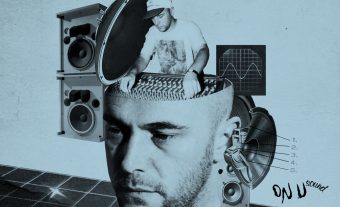