‘There wasn’t a plan and an “oh I need to change” moment. Life changes, I just went with it.’

At some point during our lives, most of us will experience a period of transition, a lifestyle changing room into which we’ll either march determinedly or stumble headlong.

This metamorphosis, whether organic, by design or through necessity, will have as its catalyst the need to shed skin, to change course or simply, to reinvent. The resultant changes can be both life affirming and life altering. Que sera sera, kismet, providence – what’s for you won’t pass you by so you just gotta roll with it.

‘Everyone keeps asking me about my hair,’ declares May, ‘but I don’t really think about all of that too much. New album, new look. It’s not really a big thing!’ she insists in that effervescent Dublinese which, true to her Liberties roots, she has never tried to South Countify. ‘I went to the hairdressers with my sister, it was as simple as that. She called around and said “Let’s go for coffee” and we ended up going down there ‘cos I was down in the dumps. And like a lot of other people I got a new haircut and I felt much better.’

Imelda May talks with the same high watt energy with which she performs. She has just released a spine-tingling stunner of a new single ‘Black Tears’ on top of announcing a multi-date tour that will take her impending new album, Life Love Flesh Blood, to a myriad venues across UK&I.

The widely reported dissolution of her marriage has been an hugely transformative experience but it’s not just her image that’s been ‘restyled’. Her musical USP has been traded in, replaced with a bluesier, crossover sound. It’s a little bit plus ca change, for Imelda May has always been about a lot more than ‘rockabilly’ and Johnny with his ‘boom boom’. There has always been a jazzier, smokier, more profound undertone to this Dublin woman’s soul than has sometimes been obvious.

The reaction to her latest single ‘Black Tears’, which features the guitar genius of Jeff Beck, has been astounding, and deservedly so. It’s utterly beautiful balladry. Evoking the legendary Patsy Cline and the heart-breaking pain of ‘Crazy’, this raw and poignant song reads like a page torn from the most emotional chapter in the open book of her life. When I first heard it, I experienced the very same lip quivering reaction as I had to Cline’s most famous recording. I recount this to May and her response was as natural as we’ve come to expect from this unassuming maven.

‘I can’t thank you enough for that comparison and I’m really glad the song connected.’ The singer is genuinely thankful. What you come to learn pretty quickly with Imelda May is that there is no playing to the gallery. What you see is what you get. 100% unaffected Imelda.

‘I actually wrote ‘Black Tears’ in the middle of “lip quivering” myself and I think that comes through. I wanted to keep it simple and just say it as it was. Say it as it was happening to myself, rather than trying to come up with something really clever lyrically. I just wanted to say it as simply as I could. I’m flattered by the comparison with ‘Crazy’ and Patsy Cline. I love her singing and I love Willie Nelson’s writing as well, he’s phenomenal. And I love that song.’

But was Imelda listening to Cline before she went in to record this and the rest of her album?

‘Funnily enough when I’m writing I make a point of not listening to anything because otherwise you’d write what you’re listening to, because it goes into your head’, she stresses. ‘So I try not to listen to music when I’m writing so I can form my own songs and my own thoughts. Otherwise I’d end up being swayed.’

‘If there is anything else in there’, she muses, ‘that’s just down to what I listen to all the rest of the time because you are influenced by the things you love.’ Imelda May is honest to a fault, and genuine beyond it! ‘To go with my feelings, with my guts and instincts, I found that very liberating.’

The album Life Love Flesh Blood is like a diary of your thoughts, emotions and experiences during this specific phase in your life, I offer. Written lyrical entries enhanced by the feeling and mood of the music. Imelda May agrees.

‘Yeah, it’s very much like a diary. I used it as therapy. I think.’ The notion has the singer burst out laughing. And what a laugh. Pure deep down belly.

‘You know, on other albums I wrote about personal things and although the songs were influenced by what was going on, sometimes if I’m being honest, you can hide things in there. You can be honest but discreet you know?’ Did her voice just wink at me?

‘But on this album, I’d had enough of that and wanted to just write for myself. I wanted to not think of anyone else, she says, her voice firm, ‘and to not think of anyone possibly listening to the album. I just wanted to be honest, and straight and open if you like, and just write what I was feeling. So I did use it as a diary in a way.
I wrote 28 songs which I whittled down to what ones worked together. I really enjoyed not having a plan, not knowing what it was going to sound like, not knowing what way it was going to go. And just to feel. Just to feel. And be creative. To go with my feelings, with my guts and instincts, I found that very liberating.’

What is clear is that Imelda May has leapt into the breach without parachute or safety net and survived. She, like many before her, has cried more tears than she thought herself capable, felt the pang of remorse, the pain of the knife of disappointment slicing her innards with gusto. Yet here she is, a poster-girl for positivity, acceptance of change and moving onwards and upwards.

Was making the album a form of closure then? By so clearly articulating, so deliberately exposing her feelings and by saying ‘You know what world, here it is and like it or lump it, this is me and how I feel’, did she experience a sense of liberation?

‘I couldn’t have said it better myself, it’s like you read my mind. 100% that is how I felt yes and you know, I think you get like that, you change as you get older. I don’t know about you but I’m not the same person now as I was at twenty. You make mistakes, you learn and you grow. Things happen and life happens.’

You’re not that 21-year-old ingenue anymore, I reply.

‘Exactly but you can always find new things to be thrilled and happy about. Your priorities change. You value things more, you value people more. So, I had to write just how I wanted to write and like you said, it was like it or lump it, this is how I feel. That was just how I felt at the time of making the album. There wasn’t a plan you know, an “oh, I need to change”. Life changes, I just went with it.’

I put it to her that the cast list for the T-Bone Burnett produced album is quite something. Was this the realisation of the Imelda May wishlist and just how, logistically speaking, did she manage pull it all together?

‘The “cast” were definitely on my wish-list’, she laughs, her voice sparkling with life. ‘People had been asking me for years in interviews who was on my list and T-Bone Burnett was at the top of it. I’d wanted to work with him for many years’. Her enthusiasm is now fired up to the max. ‘For me T-Bone has that perfect mix that I love of badass and class, you know? He gets that balance perfectly right. So I was thrilled when the record company asked “who would you fancy [producing] this?” So I put this out there as the dream.’

‘Always aim high’, she urges, ”cos you never know, you just might get what you wish for. And I did!’

Then she innocuously drops this gem: ‘T-Bone said to me, “I’ve been watching you for a long time Imelda, but you weren’t ready for me yet.” I thought that was just such a wonderful thing to say and I genuinely felt ready. I’ve worked with many musicians over the years and I’ve had my guys in my band for a while, but I wanted to take a leap of faith. I wanted to work with T-Bone and he had suggested these guys. He had put a lot of careful thought into who he should get and thankfully it worked really well. I met them the morning of the first day recording. There was no rehearsal. They had my demo and that was it! We just started and worked the songs out and got to where they felt right. I just felt good. We did fifteen tracks in seven days’, she says, laughing, ‘so I think it went well.’

Imelda May is at her best when she’s beguiling audiences with her mesmerising, smouldering live performances. Her upcoming album tour will see this much-loved star play some amazing venues, including the London Palladium and Dublin’s mega-watt BGE theatre, where she has a three night residency. So, before we sign off, I jokingly ask this Queen of live performance just how daunting the thought of playing a new album in these prestigious venues is. Will she feel terrified or ignited?

‘A bit of both’, she buzzes. ‘Sometimes being terrified ignites you, you know, the adrenaline, you can work it to your advantage. I’m really looking forward to it very much, I can’t wait. I’ve ten musicians in the band now, loads of them, and they’re sounding really great. I’m loving the rehearsals and hoping, really hoping, that people will like the new music and enjoy the performance just as much as I do. Can’t wait.’

Imelda May’s forthcoming album will be released via Decca records on 7th April and is available for pre-order via her official website. Her UK&I tour kicks off in Ipswich on 4th May, tickets available here.

Better late than never... The Monitors' best albums of 2016 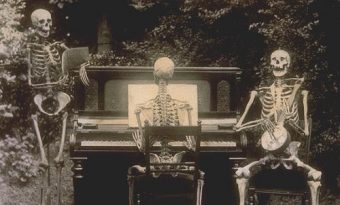 Much like the many musicians culled in last year's bonfire of the celebrities, this 'Best Albums of 2016' list is late. Yet the records it celebrates still deserve recognition...
Read More