Our EP Address column returns a little later than planned, but no less full of dynamite music. Not least the debut release from masterful Polish cellist Resina…

Having not been blown away by either of their most recent releases, I wasn’t expecting too much from Aesop Rock and Homeboy Sandman’s second LICE EP together. More fool me, as it’s clear from the second the wonky chimes of ‘Zilch’ kick in that this is going to be a fun listen. Largely, perhaps, because it sounds like it was fun to make: two people in love with their craft, having a laugh together while sampling dialogue about lice. A recipe for success if ever I heard one.

Aesop is my favourite of the two by some distance (sorry Homeboy), and while none of his lyrics here quite match the psychiatrist dialogue on ‘Shrunk’ (from this year’s The Impossible Kid LP), there are a few choice lines. The bathos of ‘Couple Things’ is particularly brilliant: “I write about delirium and disappearing devils / Then frame it with a margin of the most feared symbols / And a shitty drawing of me playing Guns n’ Roses pinball” (swiftly followed by the glorious couplet “I walk like a D-Day sim / You walk like a de-veined shrimp”).

The beats are great too, particularly the rippling guitar edits on ‘Mud’ and the even jazzier organ dash of ‘Stop The Bleeding’. ‘Oatmeal Cookies’ is the only track that doesn’t quite satify, although even here Homeboy Sandman raises a chuckle with the lines: “I want a single to blow up like Souls of Mischief in nine three / So I can get Bobby Sonic a diet cola IV”. It’s the easy spirit of such wisecracks that makes the record such a gratifying diversion, especially when it’s also free (the pair helpfully suggest a couple of good charities to donate to in lieu of payment). Overall, Lice Two is infectious in all the right ways.

We premiered one of the tracks off this EP back in March, so it’s good to finally hear the record in full. As on the soft-stepping ‘Cure’, Awate’s four (successful) cases against the Metropolitan Police provide plenty of lyrical inspiration, while the rapper’s roots in the Horn of Africa explain the low-key Mulatu Astatke sample in ‘Uncontrollable Dopeness’. A bit of Astatke never goes amiss, and so it proves here.

The opening track ‘Out Here’, all soulful organs and defiant lyrics, is perhaps the most immediate of the five on offer, although Turkish Dcypha’s crate-digging approach means there are no slack moments. The temperature seems to alternate between tracks, with the spicier ‘Out Here’ and funky ‘Fever’ partnered with cooler, calmer tracks, before everything finally levels out with the bassy wah-wah groove of ‘Displaced’.

It’s this last track that feels the most focused overall, with Awate taking on the subject of a changing Camden with a feeling of angry resignation (“I don’t care about your real estate / I’m from a real estate”). As Londoners find themselves living in an increasingly gentrified and authoritarian city, it provides some stark reminders of what we’re losing.

Now I’m no armchair psychologist (OK, I am) but I wouldn’t be surprised to find out that Canadian producer Flatland Sound Studio suffers from some form of ADHD. His music certainly seems to – it just can’t sit still for more than a second before racing off into another explosion of synths or saw wave fiesta. Which could get annoying if Ocean Radio Planet was a small child, but as an EP it just serves to highlight the producer’s immaculate attention to detail.

For while opener ‘Zoma’ begins as if heralding the first threads of a new genre called Lounge Gabba, the track turns out to be a remarkably smooth and melodic piece of music, the hyperactive percussion adding a peppery texture to what could otherwise pass, vocally at least, as an Al Bowlly crooner. The melody helps make the track more memorable than the bubbly ‘Kelper’ and thumping ‘Worship’, which passes in a blur of lasers without ever scoring a direct hit.

The second half of the EP is more successful, with the oddly soothing ‘Sea Me’ managing to calm the nerves despite a brisk BPM. Again, the sampled vocals allow it to slip more easily under your skin. ‘Gush’ takes things up yet another gear, a charming but chaotic beat-fest that reminds me of the halcyon days of breakcore down in Brighton… sigh.

The best is saved till last though: ‘Wave Arp’ is an absolute belter, and the most agreeable mixture of all Flatland Sound Studio’s many predelictions; it’s a bit like what footwork might sound like on the moon. Lord knows what the producer will come up with next, but it’s guaranteed to be interesting…

Trim’s had one hell of a year. Not only was his 1-800 Dinosaur Presents… album an absolute pearler, but pretty much every track he’s appeared on seems to have matched that standard. ‘Writer’s Block’ is no different, with Lixo’s spacious, light-touch production providing plenty of room for Trim’s rhythmic flow. Even when a layer of distortion is periodically applied to the vocals, the track still somehow feels weightless, only kept anchored by the sub bass.

Perhaps Trim suffered some actual writer’s block after knocking the a-side out of the park, as the b-side is an instrumental. ‘Relean’ is no less rich for that though, a gorgeously woozy and oddly romantic piece of work remeniscent of Modeselektor’s ‘Let Your Love Grow’ or even Lump-era James Holden. It’s so good, in fact, that it’s near impossible to choose between the two tracks on the record. Either way, it’s fair to say that writer’s block is not something Lixo is afflicted with.

I can only presume the title of Mieux’s latest EP is ironic, as it’s probably the most joyous of our releases this month. Then again, there’s no accounting for taste. Perhaps to some people, Mieux’s music would be painful to listen to. Frankly, those are people that I don’t want to know.

What I do want to know is how Mieux made the pararhythms of ‘Rust’ so damn palateable; how they managed to make the cheesy electric guitar on ‘Pawn Shop’ not make me want to put my earplugs in; what they used to get that warped steel pan sound on the delectable ‘Separee’; where I can listen to the prequel of ‘Fishing 2’; and whether the title of ‘Dead Panda’ is a chilling hint at their nefarious plan to murder the man with the most similar sound to their own: Gold Panda. Hopefully not.

And that’s without even mentioning the intertwined loops of the title track, which manage to knot themselves together nicely, following the lead of a winning snare/ride combo. Let the Austrian duo’s music thread its way into your ears – trust me, you won’t feel any pain.

OK I’m cheating a bit with this one, as with four of its seven tracks clocking in at over six minutes, it’s probably misleading to to describe this as an EP. Still, there’s no way I could let Resina’s eponymous debut pass without mention. Hell, it’s quite possibly one of the records of the year across all formats.

The Polish cellist actually recorded this back in 2014, and considering it contains no overdubs and little post-production, it’s hard to understand why it’s taken so long to see the light of day. Let’s call it kismet, as there’s definitely something about the music’s heightened, melancholic tension that is very 2016. In fact I’ll probably watch Trump’s inauguration with the sound down and this on the stereo, while weeping into a cup.

Mostly I’m just kicking myself for missing her supporting Ryan Teague at Union Chapel last month, as having been consumed by this record I’m desperate to see her play it live. Listening to the first strains of the album’s taut, anticipatory opener, ‘Tatry I’, is like watching a butterfly gently emerging from a chrysalis. A butterfly which, extending the metaphor, would then hop through the strange new architecture of ‘Flock’, rest awile on the impossibly delicate ‘Tatry II’, and narrowly avoid being eaten by the snapping predators lurking in ‘Nightjar’.

Or, actually, being eaten, with ‘Dark Sky White Water’ being the fineral dirge and ‘Afterimage’ the soundtrack to its ascent to heaven (do butterflies go to heaven? I must ask a priest next time I meet one). Which leaves ‘Not Here’, which is not the smouldering, droning void you might expect by this point, but probably the prettiest piece of the set (the droning void is saved for the coda). If there’s been a better solo cello record in 2016/ever, I’d like to hear it.

The deft percussive touch of the Leeds-based Spooky-J makes this double-header a bloody joy to listen to on good headphones. Or so I imagine; these headphones aren’t that great and the sound keeps going in the left can unless I intermittently wiggle the lead going into it. Still, if ‘Limbo Yam’ sounds as good as it does in my headphones, I can only imagine what it would sound like through a pair of AH-D600s. Sadly, unless I win all my Fantasy Football money leagues this season, I’ll probably never know. Seriously though, the echoing kalimba and thick kick of ‘Limbo Yam’ help make for a very fulfilling four minutes.

On the flip side, ‘Pfer’ offers a more upbeat alternative, with the rolling percussion almost moving into footwork territory. There’s a distant synth in there too, but frankly this is a track primarily for drum-heads, and the fact that everything on the record was recorded by Spooky-J rather than sampled makes it all the more impressive. (Drum) roll on the next Blip Discs release.

We heaped praise on one of Andrew Morrison’s other aliases Buz Ludzah in an EP Address back in April, but this release under his more common The Cyclist moniker is possibly even better. The title track is certainly a marvel, with fluffy, whipped up synths adding a tranquillised euphoria to lo-fi breaks that occasionally hint towards 2-step, without ever fully crossing over. It has a quality that not even Kompakt/Pampa veteran Robag Wruhme can improve, although his remix does add a luscious dressing to the main dish.

‘Born in ’92’ offers a different flavour of The Cyclist’s distinctive style, with a tangy approach that gets even sharper when the hi-hats kick in. The synths are as dreamy as ever though, providing that rough-meets-smooth contrast that I just can’t get enough of.

‘Push’ adds a new element though, namely the vocal input of Tanaya Harper, who adds a solid top-line to the garage-y groove underneath. Personally, though, I can’t help but feel like the vocal distracts from the elements that make The Cyclist distinctive, and the track feels more formulaic as a result (despite the fact that it’s actually deviating from his usual formula). Luckily the track unexpectedly whirls into some crucial uptempo breaks towards the end, and all is as it should be. If you have no other pressing matters to attend to, I’d advise grabbing a pressing of this forthwith. 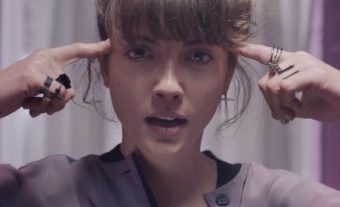 From the coldblooded return of Duke Garwood to the hotblooded dance arsenal of Noga Erez, here are a dozen great tracks released over the last month...
Read More