A combination of annual leave and work overload means we’re running a bit behind at The Monitors. About six weeks behind to be precise; problematic in some respects but on the plus side Leonard Cohen is still alive and Trump hasn’t won the election yet.

Anyway, take a trip back in time and treat your eyes (and ears) to the eleven best music videos from September 2016, including a clean-up session with Jax Jones and a trip to the beach with The Limiñanas…

BAYA – A Call To Say Hello

When you have to watch someone’s music video in the same room as them it can often be awkward, especially if you have to pretend to like something you really don’t. Luckily that wasn’t the case when BAYA swung by the Record-Play office and gave us a sneak preview of the video for ‘A Call To Say Hello’. The real life story behind the video, which saw BAYA travelling to Harlem to see his father (whose words bookend the piece) for the first time in 27 years, is engaging enough, but the animated augmentation by John Christian Ferner Apalnes takes it to the next level.

The best track from Bill Baird’s Earth Into Aether album gets a video to go with it. Like the song itself, it’s a dry send-up of cliched rock and roll behaviour, with Baird playing the hotel maid charged with cleaning up after a night of excess. It’ll make you laugh, sure, but maybe it’ll also make you think about who’ll have to carry your body out next time you overdose in a hotel bath. It’ll also make you wonder who had to get that Rolls Royce out of the pool after the Be Here Now album cover shoot? Not the Gallaghers I bet.

Derval McCloat already covered this video in her last Nordic Schmordic column, but it’s so good I’m sharing it again. A simple, hilarious concept perfectly executed by a jolly bunch of Latvians – what’s not to love? (Also, take the time to check out the Secret Friends project by director AnaHell’s , the inspiration for the clip.)

The last Hinds effort to appear in MPEGs Eleven was the beautiful (and expensive-looking) video for ‘Warts’. In contrast, ‘Bamboo’ looks like it was knocked out in an hour for the price of a can of San Miguel. And yet it’s no less brilliant. Recalling the simple graphics and dark humour of online depression comic Hyperbole and a Half, it follows an animated Hinds on a mission to steal, er, everything in the world. Oh, and pull the tail off a rat to make it sexier.

Ever wondered what happened to Barry Scott, the over-enthusiastic hawker of Cillit Bang? Director Ozzie Pullin has an idea, and he’s used it as the focus for ‘House Work’, taking the house anthem’s title and scrubbing it till it sparkles. The Scott-a-like’s performance is (Cillit) bang on, and there’s a nice nod to Daft Punk’s ‘Around the World’ too.

Oregon rockers Red Fang have been getting a lot of love on The Monitors of late, and the cheerfully brutal video for ‘Shadows’ goes a long way to explaining why. Like a US take on Ben Wheatley’s Sightseers, the band upset the wrong holidaymaking duo early on, leading to a Predator-style slaughterfest centred around a runaway crate of beer…

The new album by Polish cellist Karolina ‘Resina’ Rec is a thing of beauty (seriously, go get it), and animator Mateusz Jarmulski has done it an excellent service in the form of his video for ‘Nightjar’. Reflecting the track’s taut, shimmering darkness, it creates a landscape as subtle, otherworldy and enrapturing as Resina’s composition.

Róisín Murphy rarely disappoints, and while she’s hardly the first to play with emojis and messenger graphics in a music video, ‘Whatever’ is possibly the best example to date. The combination of floating surrealism and playful glitches is a good match for a delicate piece of music that still contains the odd experimental spurt. Just be careful where you drop that Google Maps pin…

One video spread over three tracks, or three videos sharing a theme, whichever way you look at it Ta-ku & Wafia have done something special here. Stick with it even if the first one seems slow, you really need to experience all three in one sitting to enjoy them to the fullest extent.

Ah, the beach. Is there a finer daydream in the middle of a gloomy November? Well if the beach happens to be the one The Limiñanas have stretched their towels out on, then quite possibly. All seems to be going swimmingly with the baskers and beach-ballers in this stylish animation, but for the not-so-happy gambling campers in the sea it’s a different story…

Another effort that almost seems too ambitious to be described as a music video. Maybe a meta-video? For while this ten-minute production starts on a music video set, it soon becomes way more befuddling than you’d expect from your typical promo clip. No one is more confused than Staples himself, who finds himself pulled on a string through a series of hallucinatory scenes that fall somewhere in between The Shining and Fear and Loathing in Las Vegas. A comment on posthumous success is swirling in there somewhere, but the main impression you’ll leave with is that, once again, Vince Staples has shown he’s never satisfied with the lowest common denominator. 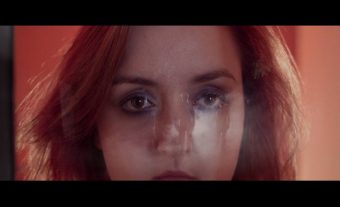 Storm the Palace's 'Nadir' arrives just as 2016 seems to have (hopefully) reached its own nadir, taking us on a tour of the psyche's darkest recesses...
Read More