When I was a wee lad I used to love the TV show ‘Land of the Giants’. Every Sunday afternoon I’d shift in front of me TV, probably sitting far too close to the bulging glowing screen, to watch patiently as the crew of the crashed spacecraft ‘Spindrift’ fought through the hardships of being rendered miniature in an alien world peopled by giant humanoids. Now the size of mice, the once human-sized gaggle struggled weekly as their altered height made everything agonisingly difficult.

On their debut album, Land of Giants, clattering noise-mongers Mums don’t have this same pint-sized problem. From the off Land of Giants sounds positively gargantuan, and Mums at consummate ease with the task at hand. That task, my friend, is rocking your proverbial love-spuds off.

Released via Superstar Destroyer Records (who also released the brilliant ‘Britn3y‘) ‘Land of Giants’ is Widnes-based Mums’ first album under their new moniker. Formerly ‘Aeroplane Flies High’, the trio comprised of Jack Evans (vocals and guitar), Roanne Wood (Guitar) and Lewis O’Neill (Drums), changed their name to ‘Mothers’, before a nomenclature clash with another gang of musical mothers caused them to settle (like a cold foot in a warm comfy slipper) on the shorter and more colloquial ‘Mums’. Everybody loves their mum aye.

Starting with the chugging mind-worm of ‘Underneath Rocks’ Land of Giants will fill your lugholes with a relentless slew of aural sweetness, stuffing your ear gob with so much delightful racket-sugar your face will ache with multicoloured goodness. Its 10 songs and roughly 37 minutes are filled with good old fashioned bludgeoning fun, just like mamma used to make. Well if ‘mamma’ was a giant noise-rock agitated Cthulhu that worshiped Melvins and had a vitamin deficiency. Which let’s be honest is the best kind of Cthulhu.

‘Since My Brain Reset’ showcases the machine gun scorch of O’Neill’s drumming perfectly and is paired with a galaxy-tearing riff-thrashing rush that shakes the final throes of the track off the rails. Elsewhere tracks like ‘Teamin’ and ‘So’, with their chiming melodic scree, show off Wood’s and Evans’ canny dual guitar work like a proud parent at a spelling bee. Throughout Land Of Giants I never felt the ache of a missing bass, and I bloody love a bit of bass I do. The fact I hadn’t felt the twinge of four-string longing is a good recommendation of the guitar work on display I’d say. That is if my words of recommendation mean anything to you, which they fucking should. You can trust me.

The screeching jet thruster guitars that blast away at ‘Rosies Noisey’ push Evans’ melodic vocals from the track like lyrical mud through a colander: ‘You’ll find a way home, no need to bury your head.’ Indeed, with Land of Giants Mums have lifted their head out of the metaphorical undergrowth, stood up tall like some mighty aggressive ostrich and given the long middle finger to all who doubt that mother truly knows best. 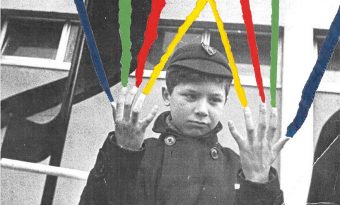 Is it possible to bottle the lightning of a Notwist gig? Probably not, but Weilheim in Oberbayern's finest have given it a damn good go...
Read More