Joy. Excitement. Arousal. Ecstasy. Dizziness. All of these are emotions you may feel while listening to the debut album from Dalston duo EMOTIONAL. OK, so not all of those are actual emotions per se, but trust me, you won’t be bothered about that once you’ve started listening.

EMOTIONAL, aka Sian Dorrer and Adam Parkinson, have been testing their experimental pop concoctions on London audiences for a few years now, and judging by these nine potent compounds this has helped refine their formula to perfection. The EMOTIONAL combo of found sounds, cheap synths, drum machines and impeccable melodic hooks recalls the likes of Micachu, Maria Minerva, Dean Blunt, early Grimes and even A Guy Called Gerald, with Dorrer’s voice a consistent silver thread throughout.

None of the nine songs on the record are any less than superb. Don’t believe me? Well listen to the exclusive album stream below and find out for yourself. The only difficulty is picking out which tracks to wax lyrical about. The pristine top-line and ’90s club synths of ‘Heartbeats’? The bleepy beats of ‘Mirror Say The Same’, which sound like something a modern day teenage Mark Mothersbaugh might make in his bedroom? The, yes, emotional strings on ‘Fish Island’, which you wouldn’t be surprised to see Alison Goldfrapp ripping off on her next record? That’s only the first three tracks and it’s hard to settle on a favourite even from them.

Other highlights include the distorted percussive stomp of ‘Spinning’, the dreamy delay of ‘Run Deep’ and recent single ‘XTC’, which we raved about in a recent edition of Single-Minded. The jerky ‘Transmission’ is another killer, similar to one of Sian Dorrer’s other bands – the rambunctious post-punk trio Ravioli Me Way – and featuring a reverb-flattened sample of Jefferson Airplane (and another famous band that I can’t quite bring to mind and is now really bugging me) towards the end.

According to EMOTIONAL’s press release, their music is “born out of a deep rooted love of pop and an inability to make it normally”. Let’s hope they never learn how to do it properly then, because to these ears this is pure pop perfection.

EMOTIONAL’s debut album is released this Friday (9th September), and can be pre-ordered from MÏLK Records here. Get into it. 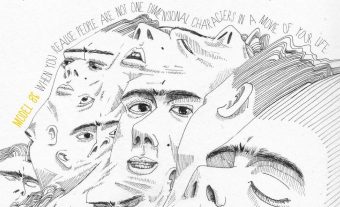