From Elysia Crampton’s introduction to Demon City, to Model 86’s brilliantly titled When You Realise People Are Not One Dimensional Characters in a Movie of Your Life, here are the best EPs released around midsummer 2016…

I’ve got to admit, ABRA’s much-hyped ‘CRYBABY’ did nothing for me. ‘Prince’s corpse is barely cold in the ground,” I thought. “Can’t we wait even a few months before raiding his grave for drum machines and rubbery basslines?” Even the title of the EP it came from seemed a piss-take in that context.

It was a surprise then to discover that ABRA’s PRINCESS EP actually contains plenty of gems, and not all of them robbed from Minneapolis mausoleums. The seductive zombie strut of ‘COME 4 ME’ is way too good to cut after just 62 seconds, while not even the tedious ’80s reverb on the snares that stab holes in ‘VEGAS’ can upset its casual glamour (although in contrast, at 5:21 it’s somewhat overlong). ABRA’s give-a-fuck flow on ‘BIG BOI’ would do the fellow it’s named after proud too.

While I’m still not sold on ‘CRYBABY’, and the production style does start to feel a little samey by the time ‘THINKING OF U’ plinks its way into the distance, there’s enough on PRINCESS to suggest that ABRA’s coronation by much of the music press might not be as premature as I first figured.

Compton White, aka Lloyd Whittle, chooses to open his Compton White EP with ‘Track 2’, swiftly followed by ‘Intro’, a zany move that does little to endear him to this jaded reviewer. Luckily ‘Track 2’ is frisky and floaty enough to warrant a second chance, a chance that the bruising ‘Hounslow’ grabs with both fists. It’s a track that’d probably make more sense in Brentford than Chiswick, but it’d sound decent in any part of the borough (or beyond).

The second half of the EP surpasses the first though. ‘Double Diamond’ goes for Gold Panda levels of blissed out sampling (more of that guy later), while the fizzing, sparking ‘Van’ shows that Compton White is an assured producer when it comes to taking unpredictable routes (not sure I’d be his passenger in a real vehicle though). By the time we’ve reached the booming, stuttering ‘Mainland’, Whittle has won me over.

Apparently the record is based on the regular journeys his family of ‘Sand Scratchers’ – Romany Showmen – took when he was a kid. While instrumental music can only ever go so far in relating real life stories, the multi-faceted attempts of the Compton White EP to do so make it a trip worth taking.

Darkstar – Made To Measure

The opening track of Darkstar’s Made To Measure is, like ABRA’s ‘CRYBABY’, one that originally left me cold. Perhaps the appearance of the excellent Empress Of on guest vocals heightened expectations to a level almost impossible to satisfy? Or maybe it’s just a grower, as it sounds a lot stronger a few months down the line than it did first time around. The circling phrase that leads the track is key, as ghostly as a burnt out carousel on the end of an abandoned pier.

‘Black Ghost’, featuring Darkstar’s new labelmate GAIKA, also sounds much more agreeable in the context of Made To Measure than it did on first hearing. Darkstar’s rounded textures could sound jarring against GAIKA’s striking delivery, but both parties manage to tailor their contributions in a complementary manner.

What with the two older tracks having grown on me, you’d expect the newer offerings to be similarly slow-burning. Not so. ‘Deltaskelta’ is classic Darkstar, its ear-sniping hook immediately playing off against smudgy, submerged vocals. It’s probably as close as they’ve ever come to revisiting ‘Aidy’s Girl Is a Computer’. The Shimsung edit of Foam Island track ‘Through The Motions’, meanwhile, is a sleek, dusky improvement on the somewhat awkward machinations of the original. And so, an EP I was expecting to be underwhelmed by becomes possibly my favourite Darkstar release since 2008’s ‘Need You’. Whodathunkit?

From the moment ‘Irreducible Horizon’ – a pretty horrifying concept in itself – laid its first icy fingers upon my ears, Demon City had me under a spell. And not a very nice one either. No, this is the sort of spell that leaves you shivering and sweating while impish visions tickle your eyeballs. If this was the middle ages, Elysia Crampton would be on her guard for witchfinders, such is the potency of her sorcery.

Crampton is not without her conspirators though. The likes of Rabit and Lexxi also haunt the seven districts that make up Demon City, the former helping shatter windows with iron pipes on the ominous title track and the latter contributing to the record’s two closing numbers. The first of these, ‘Esposas 2013 (No Drums)’ is as beat-free as you might expect, instead draped in sheets of sound; albeit sheets charged with friction. This is contrasted by closer ‘Red Eyes’, which offers the most clatteringly propulsive hit on the record, akin to one of Keysound’s catchier releases.

The other two tracks both feature Non Records co-founder Chino Amobi, and are both equally arresting. ‘Dummy Track’, also featuring Why Be, is as utterly demonic as the EP’s title demands – the insatiable percussion and twisted laughing samples make it feel like an ayahuasca ceremony gone ludicrously wrong. I love it.

However, ‘Children of Hell’, despite enjoying the most obviously horror-lovin’ title of the record (and the same laughter motif), fails to leap the same synapses, possibly due to the somewhat irritating toy saxophone. Despite this minor slip-up, Demon City still earns a high TripAdvisor score from me – if there’s any real complaint it’s that there’s far too much on offer here to fit into a mere 25 minutes.

As hinted at by the title, Kingdom is a record that revolves around the little island some of us call home. Apparently it was partially inspired by Gold Panda’s Brexit fears, as well as an incident that saw his Afghan neighbour being ripped off by a unscrupulous delivery driver. All of which would lead you expect an uncommonly bleak piece of work from an artist who usually errs more towards bliss.

While in some cases that’s true – the rain-spattered ‘Eurotunnel’ is probably the gloomiest Gold Panda track to date – it’s far from a dispiriting listen. Opener ‘A Welcome’, one of two tracks apparently loosely based on his neighbour’s aforementioned misfortune (“I thought this was a pretty shitty welcome”, confirms GP in the press release) is one of the most beautifully ambient pieces ever to bear Gold Panda’s name, an exquisitely and refreshingly restrained production.

Aside from the lurching ‘Mediaevil’ (geddit?), which takes us back into more familiar Gold Panda territory, the rest of Kingdom feels equally withdrawn. ‘Stolen Phone’ sounds distant, dreamlike and mournful, only the thumping heartbeat of the kick and hi-hat keeping it from giving up completely. The distorted pulse of ‘Blown (Out)’ acts similarly, with the classic Gold Panda chimes rendered faint and ghostly in the background.

So many of Gold Panda’s releases feel like upbeat postcards from Asia or South America. Kingdom is the sound of a traveller who’s finally returned home, only to find home has changed irrevocably. That feeling of uncertainty and tension makes it one of his most interesting records to date.

Easily the best EP title of the summer, and perhaps one of the best EPs of that period, period. From the flighty beats and butchered samples of ‘Holdin” to the twisted parting breeze of ‘Fallin Dust And Snow In A Ray Of Sun’, Model 86 takes nothing but left turns yet still always ends up on the right path.

‘Mono’ is a masterclass in sampling and editing, with fragments of flute, guitar, bass, vox and piano all interlocking like a high security vault full of spring snakes – the technique is clinical but the end result is always surprisingly fun. While the flickering, kaleidoscopic RnB of ‘Need 808’ isn’t quite as catchy as the opening tracks, and ‘Fake Life Jackets’ might teeter on being too fidgety for some, Model 86 always seems as excited to see where his music is going to end up as the listener is.

(Check out this recent interview with Model 86 on our sister site, MusicMap.)

As Truss and Tessela respectively, brothers Tom and Ed Russell have already made names for themselves individually. However, like Frank and Ronald De Boer or Gary and Phil Neville, their new collaborative outlet Overmono suggests their greatest achievements may come when they work together. Forged during a creative retreat in rural Wales, Arla brings both brothers’ strengths to the fore across five diverse tracks.

The record’s brevity suggests there may be plenty more to plough through in future. 80-second opener ‘Olchon Flows’, for example, slyly slips away just as it seems like it’s about to explode. The tracks that do go the distance emphasise the rich seam of form in evidence here though, not least the sparse, syncopated ‘Lockner Union’ and the majestically drizzly strings of ‘Winged’. By the time the juddering synths of ‘Programmer’ shake their way to a conclusion, Overmono are seeming like an inspired signing for XL. Let’s hope they keep this collaboration up.

Released on PAN sub-label CODES, Sky H1’s Motion EP rivals Gold Panda’s Kingdom for the most gently emotional record reviewed in this month’s EP Address. With its roots in bereavement rather than Brexit (the record is dedicated to the Belgian producer’s late father), that might seem unsurprising. What is surprising, perhaps, is that the feelings inspired by Motion aren’t depressing or tormented, but much more nuanced. As she told THE FADER, making this music allowed her to “deal with those emotions that I couldn’t express otherwise”; perhaps the sort of emotions that music is better equipped to evoke than mere language.

Opener ‘Air’ has already been gushed about on this site, but it remains the highlight here. Nonetheless, there are plenty of other musical remedies on offer. The smothered percussion plays off nicely against the plinky tones of ‘Hybrid’, while ‘Night/Fall/Dream’ dispenses with beats altogether, the wordless vocals sounding like an ambient take on early Burial singles. It’s a record best consumed as a whole though, each track melting into the next, an emotional journey where the cathartic release is subtly underplayed yet present throughout.

EDMphasis: James, Together Festival, The Flavr Blue and more... 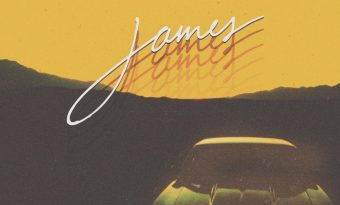