Los Angeles song-sculptor Dakota Blue has been on our radar ever since the voyeuristic video for his sparse composition ‘The State of Things’ slipped into our inbox about six weeks ago. His new track, ‘Distant Disco’, is even better, and we’re exceedingly pleased to premiere it for you today.

The drifting ‘Distant Disco’ is, in Dakota Blue’s own words, “a new instrumental track that sounds like melting guitars on top of a drum machine played to a video of a one-man disco dancer affected by heatstroke”. To which it’s hard to add much, at least without drawing a lengthy breath. Suffice to say it’s a woozily opiated beauty, recalling the gently warped psychedelics of artists like Alex Calder, RR Perkins and Oliver Wilde. The orange-filtered video, featuring Dakota Blue dancing deliriously with a bunch of geese, just adds to the effect.

“The track happened very spontaneously while experimenting with different delay sounds on the guitar,” Dakota Blue explains, “until I found a way to make it sound like it was talking to itself. The video was made in a literal heatstroke daze by Priscilla Mars, as I danced solo around empty outdoor stages and sidewalks in 105 degree Fahrenheit temp in June.” Which explains the languid moves – if you try dancing in London streets during June you’ll likely be soaked through before the end of the song.

‘Distant Disco’ features on Dakota Blue’s new EP, Seconds Move Slower, which will be independently released in September 2016. Hopefully the seconds will move quickly until then…

Merlin Tonto's 'Baotou' EP is a trip from Inner Mongolia to outer space... 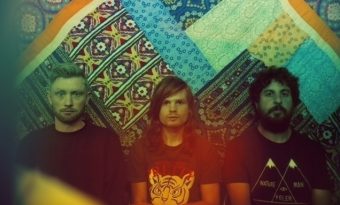