I like Air, but it’s been a while since they’ve released an album I was able to listen to without skipping a few tracks. ‘Indian Summer’, a rarity previously only available on the Japanese edition of Love 2 but included on the duo’s forthcoming Twentyears anthology, is unfortunately one that demands the FF button. The cheesy sitar would be almost bearable in very small doses, but over six minutes? Come on. Kier Wiater Carnihan

Spain’s various (mainly teenage) rap groups play off each other like soap opera characters do in the UK, Bad Gyal being the latest addition to the scene (currently racking up around 75K views on word of mouth alone). Displaying a rudimentary grip on production but producing a beat that would suit a sun-soaked party down to a tee, drowned in auto-tune and presenting an attitude the grime scene would be proud of, this is about 100x more punk than anyone wielding a guitar right now. NB

‘Panic’ sounds a bit like Savages covering Jeff Buckley’s ‘Dream Brother’, which would be enough to give anyone a panic attack if executed badly but the smartly cut structure means I actually quite enjoyed it. KWC

Doc Brown and Verb T – Glad All Over Again

It might seem hard to believe if you’ve heard Manic Street Preachers’ recent attempt to write a Euro 2016 anthem for Wales, but it is actually possible to write a good football song – and here’s the evidence. UK hip-hop veterans and erstwhile Crystal Palace fans Doc Brown and Verb T have put together an unofficial FA Cup final song for the Eagles, and both the beat and the lyrics are bloody great (much better than the 1990 team’s original ‘Glad All Over’ single, that’s for sure). Bonus points for referencing the Zenith Data Systems Cup and Andy Gray (“not him, the cool black one”). KWC

Jon Bap – Gooder Than Before / Forced

Wonky soul wouldn’t be my automatic go-to genre in 2016, but there’s something engagingly honest about Jon Bap’s drunken guitar strumming and lovelorn drool. The nonsensical ending makes it sound even more like an accidental cut. While soul continues to become more glossy and less emotive there’s something quite refreshing about a song which makes you feel like you’ve accidentally walked into someone’s living room at 4am. NB

On paper, Metronomy should be the worst band around, on record they’re one of the best. This passive aggressive recreation of previous weeks’ house parties formulated around a woozy synth and stabbing bass line, with an improbable middle-eight courtesy of Mixmaster Mike, is the audio equivalent of the centre of a venn diagram where retro cheese and dancing feet meet. NB

Stone Roses – All For One

There are plenty of Stone Roses fans who know the band are always unfairly plonked into the Britpop milieu; their self-titled debut is still one of the last great British rock records. It’s annoying then that the band don’t seem to recognise this. ‘All For One’ is The Stone Roses but with the intelligence, subtlety and artistry taken out (so you can just call them Oasis now). Look Mani, Brown, et al, don’t force us to listen to this dirge just because you couldn’t keep an eye on your accounts. (They get two begrudging thumbs up out of ten for the lyrics at least being upbeat, although deeply uninspired, which is pretty much the best phrase for this track as a whole.) NB

While not as good as Doc Brown and Verb T’s FA Cup final effort above, Super Furry Animals’ unofficial Wales Euro 2016 song pisses all over the Manics’ official effort – I actually managed to listen through to the end for a start. It may be ridiculous, but ‘BingBong”s unashamedly silly disposition, as colourful and bizarre as a Dan Deacon track, can’t help but put a smile on your face – and that’s what football’s all about, isn’t that right Clive? KWC

Wait. Wait. There’s a pun on the word ‘come’? Nope. No. No, thank you. (It would be more acceptable if this sounded like anything other than a very poor imitation of every other track from the past 12 months.) NB

We premiered Tony Njoku’s gorgeous ‘There Is No Way’ a few months ago, so it’s with great pleasure that we see him reaching new heights with ‘In Greyscale’. The track shows another side to Njoku’s songwriting, with a more beat-driven but still feather-light first half suddenly flourishing into a kaleidoscope of bleeps, bass and cut-up samples. It’s the title track from Njoku’s debut album, released at the beginning of next month; I can’t wait to hear what further treats it contains. KWC 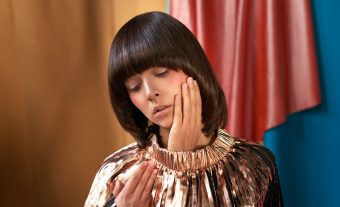