I kind of just want to focus on the music, but it’s pretty hard.

The new Radiohead album has been drip-fed. The first two tracks released out of the blue and in sequence, accompanying oddly filmic (and very different) videos. First the Wicker Man of Trumpton and then Paul Thomas Anderson’s abstracted tracking shot of Thom Yorke just looking for a place to lie down and moan backwards.

‘Burn the Witch’ thudded like an eerie herald. It felt like a summoning, a ritual. Suddenly something new was coming, and it sounded very unlike Radiohead. Sure, Thom wasn’t exactly spitting rhymes about diamonds and sunshine all of a sudden, but there was an urgent hopefulness to the strings that slammed in from nowhere, and kept finding ways to build up.

I couldn’t work out how to piece that together with ‘Daydreaming’, which sounds like the band taking another stab at a Bond theme, after ‘Spectre”s surprising success. We were actually trying to work out whether ‘Daydreaming”s video was a horrifying metaphor for alzheimer’s, or just Thom Yorke’s interpretation of an actual Bond film: ‘I’ll just walk through a lot of rooms and smirk a little, right? That’s basically the essence of Bond.’

So then it turned out the album was coming a few days later, and it was dropped into our laps on a gloriously sunny Sunday evening.

I first listened along with Tom Robinson on BBC 6 Music, which was incredibly irritating. As much as the idea of a worldwide listening party is powerful, Tom’s jolly stentorian tones don’t quite match the mood, and made the record feel very disjointed.

Because it’s a perfect little Sunday evening laze of a record, really. For all the doom-laden proclamations and the unsettling backmasking, it’s Radiohead letting you take a break. It’s the KitKat of Radiohead records.

Of course, as I write that, ‘Ful Stop’ comes on, and I’m reminded that there are little bursts of bite and teeth here. The pounding rhythm, ominous synth and eventual jerky vocal parts serve up a nervous platter of gorgeous. It actually reminds me more of Silver Apples’ particular synth, drums and surrealism combo.

By the time funk backing screams are pouring over the ever-thickening track, I’m infused with a kind of overwhelming powerlessness. On the first listen this was when I lent over to my partner and said ‘this is special, actually, isn’t it.’

To be honest though, I spent the whole of my first listen trying to eye up the various special edition versions available for purchase. I’m a big enough Radiohead fan to have somehow got the special editions of every album since Kid A, but the prospect of 60 quid to wait until September for A Moon Shaped Pool in a fancy box didn’t appeal. But on another level, I needed it.

It’s actually pretty gross that all this release nonsense soured the first listen, as really, it should’ve been about the music, and really, the band are pretty explicitly anti-consumerist. But that’s an irrelevance, really. Just a situation. Just a way things are (and I have no high horse, writing for a company that’s business is the commodification of music).

I’m not talking about the music, am I. It’s hard. As is often the case, the devil, and the glory, is in the details.

‘Burn the Witch’ wraps an anxious violin around a throbbing stylophone bassline to brutal effect. As it thickens, it opens up, every upwards, always pulling.

‘Daydreaming’ starts with rattled chimes and ends with a backmasked vocal that sounds like an old robot dog, that can no longer breathe, trying to breathe. The simple piano motif will stay with you forever.

When ‘Decks Dark”s zitherish warbling gives way to its piano groove, it takes a turn into darkness. The piano and bass interplay becomes a thrill, albeit a quiet, laid back one.

‘Desert Island Disk’ is probably one of the simplest Radiohead tracks in the back catalogue. That in itself is striking.

‘Ful Stop’ is not quite motorik, but uses a similar beat to pull you forward. It builds a basic layer of synth wash, and only pulls out the full weight of its instrumentation halfway through. It’s another opening out, almost a bursting. The lyrics become another set of layers, finally keeping pace with the rest of the track. It’s a delicate knot of sound, that revels in its own unfurling in the final seconds.

‘Glass Eyes’ is the one that’d make you cry if it went on a little longer. Through boredom or emotions, depending on your taste.

‘Identikit’ is all jerky drum line and patient waiting, with oddly gospel vocal motifs eventually lifting it out of its own stark mire.

‘The Numbers’ is just a journey. It meanders. It admires the view. It is almost haunted by its own tiny occasional piano motif, that only falls apart in the final moments, surrounded by quietly cut-up laughter.

‘Present Tense’ shuffles around itself, and probably deserves another video of Thom dancing.

And ‘True Love Waits’ finds a way to drown itself, slowly building up its own echo and reverb. Letting itself get more lost, more lonely, more desperate.

The record is lovely, accessible, warm and soothing. It has few rough edges, and many intriguing moments.

‘The Numbers’ is the latest in the long tradition of tracks that rip off the strings from Serge Gainsbourg’s ‘Ballade de Melody Nelson’, but it recontextualises them into such a sweeping breadth that it once again pulls it off.

The album doesn’t feel structured though. I couldn’t see how ‘Burn the Witch’ was supposed to fit with ‘Daydreaming’, and I still don’t. ‘Burn the Witch’ feels like it’s opening a very different record to the one it does. Its urgency is only really matched by ‘Ful Stop’.

For the rest, it feels almost like a beach record. ‘Present Tense’ in particular, with its Spanish guitar and thrumming maracas, feels like Thom and boys having an existential crisis on a tropical beach. The guitars are glistening blue waves, lapping at the toes of Thom’s anxiety. The shuffle dances around him, along with all the added layers as the track moves on.

Really, this is at the core of what I’ve always loved about Radiohead. Detractors will call them a miserable band and it’s fair. Thom sounds bleak and lonely throughout, and sells that tone efficiently, with the usual range of keening wails and cryptic lyrics. But actually, beneath that, has always been an undercurrent of joyfulness. ‘Let Down’ was always the cheeriest possible way to have a nervous breakdown.

And that’s where this album stands. It’s an uplifting break-up record. Torn hearts on sunny days.

Much fuss has already been made about the album closer. A track that’s been heard live since 1995, ‘True Love Waits’ got a sparse live recording around the Amnesiac period, and has apparently been the subject of speculation for a long time. The studio album finally lands, and it’s a lovely thing, piano-wrapped, mechanical sounds exposed, with the earth-shatteringly simple vocal at the core.

To be honest, I preferred the bare simplicity of the live version, just because it sounded like nothing more than Radiohead stripped down to a naked core. Just a sad voice and a guitar, somewow capturing a sort of desperate and unclear optimism, smothered by angst, but still always there.

But the track is gorgeous. Almost formulaically so.

A Moon Shaped Pool doesn’t make any bold steps, despite mostly sounding like a film soundtrack, and not really sounding like anything they’ve done before (there are plenty of nods, but as always, the overall tone is unique). I can’t work out if anything is memorable enough to last. It’s too soon. But I want to find out.

Pretty much everything is predicated on a particular dynamic. At least half of the tracks start quiet, and basically feature a track-long crescendo, as wafer-thin layers pile on top of each other. The layers vary, the texture changes, but I worry that essentially the songs are a blur. Not quite distinctive enough to own their names. And the wider structure doesn’t have quite the same emotional heft as many of their records. We aren’t oscillating between moods, building and falling over the course of the record, we are just playing some tracks. One builds, stops, and another begins.

It just feels like a collection of songs that sound similar enough to go together, rather than an album with a story. The fact that the tracks are in alphabetical order (if you’re librarian enough to drop the definite articles) almost solidifies this notion. But it could be coincidence.

And there’s nothing wrong with eleven really lovely tracks. On a balmy day, you can fall into them. On a cold day, they’ll wrap you up.

If you like to be looked after by Radiohead, this is probably the right album for it. Like a blanket, it just feels like good self care. If you don’t like Radiohead, this might be one of the ones you like a bit more. It has slightly more vivid optimism, and a pleasing mix textures. But you’ll likely just find it bland and moany.

That’s okay. To be honest, I’m disappointed I didn’t hate it, because then I could’ve just written ‘a moon shaped poo’ and been done with it.

For all the hype and ‘eventness’ of this record, it sits in a great and unexpected shadow. My house has had two ‘listening parties’ in the last week. One for this, a cosy romantic sit with a cool breeze after a sunny day. It was lovely, it was cosy.

But frankly, we watched Lemonade together last week, and this has none of the gobsmacking depth of that record. If you told me sixteen years ago that Beyoncé would eventually be outdoing Radiohead for depth, weight, creativity and politics, I would’ve laughed at you. But I would’ve been wrong.

Both are great records for a lovely sunny afternoon. But one is going to make you feel cosy, and the other might make you go to war.

I know what I’d rather have a cool glass of.

God Only Blows: A Tribute to Pet Sounds reviewed 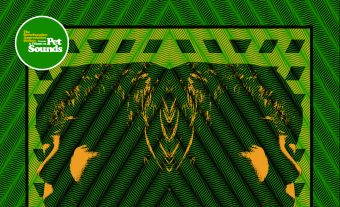 We asked the biggest Beach Boys fan we know to review a new 'various artists' tribute to Pet Sounds. Good vibrations were not forthcoming...
Read More