It’s fair to say Richard J. Birkin knows his way around a set of strings. While his gorgeous recent album Vigils is based around a handful of piano compositions written while isolated “in a cold old mill by a weir” (itself featured in a video premiered by Saatchi Gallery Magazine yesterday), the strings more than play their part. Exquisite string arrangements performed by Iskra Strings (who’ve worked with everyone from Sufjan Stevens to Johann Johannsson) thread their way through the album like the River Derwent snakes through the composer’s home county of Derbyshire, making tracks like the rippling ‘Accretions’ swell with emotion.

With such a self-evident knack for utilising strings, we thought we’d ask Richard J. Birkin to put together a playlist of equally beguiling arrangements. Beginning and ending with Scott Walker, albeit during very different eras, it’s an intriguing and affecting selection that takes in some of our own very favourite pieces too. Enjoy.

Paulo, Take Me With You – a mix by composer Richard J. Birkin, of songs with amazing and scene stealing string arrangements.

My discovery of this was actually via ‘How To Disappear…’ by Radiohead, from Kid A. I’d heard that song on the Radiohead tour ﬁlm, but then the album version had this spectral and dissonant string arrangement. Lush and warm yet uneasy and cold. I think I caught some of this Scott Walker song on the radio a few years later, and I thought “did they sample that?”. I bought Scott 3 for a ﬁver on CD, then a few days later all the other available stuff. I was already a fan of The Walker Brothers, with that big Phil Spector orchestral pop sound, but the solo stuff is something else, and if there was one piece that encapsulates the lot for me, it’s this song.

Samamidon / Nico Muhly – Saro
from All Is Well

After getting this album, I read that Sam recorded the guitar and vocals, then had a sleep before ﬂying to Nepal. While he was asleep, Nico Muhly and Valgier Sigurðsson arranged and produced the orchestrations. Muhly has this way of arranging that feels ﬂuttery like birds, and sketched quickly and masterfully. Like it’s all there in his head and he’s an artist sketching it out from memory – and it’s so perfect and moving. The song on its own makes me get emotional but the arrangement makes me want to weep.

Julia Holter – How Long?
from Have You In My Wilderness

Have you ever tried learning this song on the guitar? It’s so obtuse, and there’s a bit mid-way through where Paul Simon takes his capo off but carries on playing the same bit. That encapsulates this S&G sawn-song for me – they were at the top of their game, completely without boundaries or fear. The arrangement on this is probably the subtlest in this mix, but it ﬂits between the bluesy weirdness and baroque pop that the guitar is doing. Listen for when Garfunkel sings “dawn….” in immaculate falsetto, the ﬂute dominates but there’s amazing texture going on under there.

Jon’s ﬁrst album for Domino starts with this. It’s a side 1 track 1 that resets your head completely, emptying it in preparation for what he’s going to do to it over the next however many tracks. Those layers of harmony feel like they’re being teased out in the moment between the players, rather than acting on what is written on the page. Every new harmony or change is a response to the previous one, and every consecutive one adds more warmth and beauty. Stunning.

I remember buying this album when it came out as it was like the ultimate super group of all the more groundbreaking stuff that me and some friends had been getting into – DJ Shadow, Radiohead, Badly Drawn Boy, Beastie Boys, Massive Attack and more and more. So I went into it thinking it would all be great turntablism and beat-laden ambience. Then the second half of this track drops in and it’s like all of that Shadow/Lavelle soundtrack worshipping distilled into one brilliant composition.

I could listen to this 100 times in a row and talk to you for days about it and still not get to the bottom of how I feel about it. After many many many years I am still left speechless by this song. What I will say though is that it’s pretty clear from this selection that I like stuff that has an air of unease about it. The Scott Walker tracks, Julia Holter, Owen Pallett and this all play with dissonance wonderfully. I think that’s been very important in developing my way of arranging, and moving away from the obvious.

Joyous! I heard this the ﬁrst week I wrote my ﬁrst song on guitar. I wasn’t interested in the strings at all back then, but it must have sunk in over the million times or so that I played that single. I’m a sucker for solo’d strings. I’ve got this Born To Run documentary where Springsteen casually solos the quartet part on ‘Born To Run’ and says “yeah I’m not sure we even used that”!!! And I’m there rewinding it again and again trying to hear what it was they were going to do with that song.

This Mortal Coil / Martin McCarrick – The Lacemaker
from Blood

I still haven’t got my head around This Mortal Coil. There’s so much to unravel in this album. I haven’t listened to it in years but I always remember this piece. I’m not sure there’s anything else like it on the record. My favourite bit of this is how those cellos dash and dance upwards towards the end.

This album is a masterpiece. It’s another album that I could talk about for days on end. Owen is like Nico Muhly in the way that he can tease out something strange and unique and magical with what seems like a ﬂuid ease. There’s something about how odd some of the record sounds, and by odd I don’t mean bad odd. With synthesisers, pitch varies more than traditional instruments, you work with sound, pattern and texture rather than pitch. It’s like the album was written using synthesis, and then scored for an orchestra, but all the pitch variation was kept in or worked around rather than ‘ﬁxed’. Portishead’s Third is like that too.

Scott Walker / Brian Gascoigne – Farmer In The City
from Tilt

I have this story in my head, and I’m not sure where it comes from or if it’s real or dreamed. When the A&R guys of Walker’s label went into the studio to hear the ﬁnished version of his new album Tilt, Walker had the mix on so loud that the guy’s head got pummelled. He asked the engineer to turn it down, which he did. And then Walker walks over and slowly turns it back up to full blast and sits back down without saying a word or making eye contact with anyone in the room. So they sit in the room in silence and listen to the whole thing head-crushingly loud, while Walker sits there with his eyes in the shadow of his cap. If I could time travel, that’s where and when I would go.

Nordic Heads: Ditt Inre are looking for a 'True Believer' 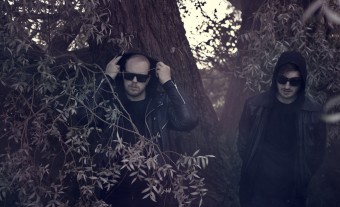 From the pulsing darkness of Sweden's Ditt Inre to Reykjavíkurdætur's Icelandic girl-power rap, here's your guide to all things Nordic this month...
Read More