Tricky’s music has always been hard to define. Apparently so are his performances. Just as Adrian Thaws can’t be put in a box genre-wise, his current tour can’t seem to decide whether it wants to be a concert, an album presentation or a performance gone rogue.

The confusion starts with the name. “Tricky Presents Skilled Mechanics” does suggest an album presentation rather than a performance. Upon arrival the joy of hearing live music is somewhat muddied by the fact that said live music is already in full swing. Are we late or is the time on the tickets wrong? Turning to our neighbours in the stuffy venue room, we find out that we aren’t the only ones puzzled. Tricky, together with guitarist and drummer Luke Harris, must have started his performance more or less sans audience.

But now the small room is full in WUK – ex-mecca for ex-hippies in the late Seventies, now venue for alternative music and art. The lights are dimmed to near darkness. I step on a few toes trying to make my way through to the front. On stage thin rays of purple and red are breaking through the fog, highlighting a black silhouette lulled in mist. Back towards audience, Adrian Thaws resembles lyric-legend Bob Dylan. But it is the wrong kind of Dylanesque. As many artists have learned the hard way: what works on a record, is a different story live.

Then again, Skilled Mechanics is more than just a record. It is an art project. Among the many vocal collaborators is Tricky himself, his own voice more prominent than usual. The album provides a mix of fast trip-hop beats, soulful ballads, emotional lyrics, soft pianos and muted guitars. Moving, experimental sounds. In old Tricky manner the beat changes rapidly and no song sounds like the other. Skilled mechanics indeed.

On stage, however, Tricky appears without his album entourage. The mixing desk has to step in. Running full speed. Mumbling unintelligible words into the microphone while drummer and guitarist give it their best, Tricky makes it hard to be entertained.

‘I’m not Going’ is a beautiful song featuring Danish singer and record producer Oh Land. Here the melancholic tone of her voice is almost lost in the electronic translation. Tricky only joins in live towards the end in an ever-so-slight whisper. Desperation. The darkness of the auditorium merges with the darkness of the song. 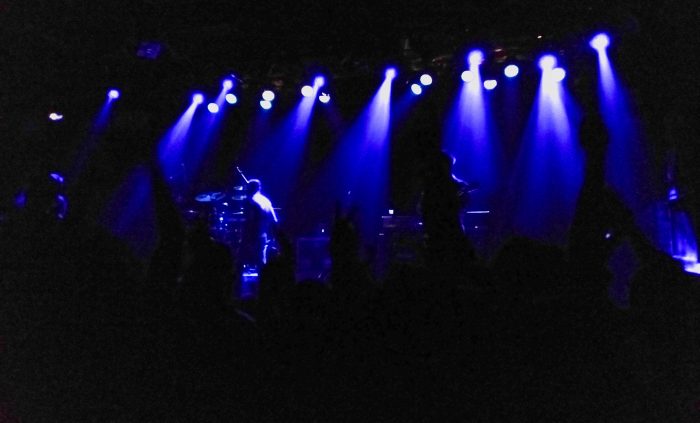 ‘Unreal’ can only be described as a strange experience. It might work at a trippy psy-trance party at eight o’clock in the morning accompanied by conversations about the boundaries of reality. Here it seems out of place.

The music stops, Tricky leaves the stage. Looking around: confusion. Eventually a rushing trip-hop beat breaks the silence and announces the next song. Only with ‘Boy’, Tricky lives up to his full potential. In his typical “sprechgesang”, Tricky gives us a very personal recount of his childhood, growing up in Bristol: rough and lonely. The chorus is menacing and almost unintelligible. Underlying trance nuances enhance the feeling of isolation. The protagonist is hunted, “slipping into the darkness”. On stage the fog takes him over.

Yet the real surprise of the evening is Luke Harris stepping into the role of lead vocalist. ‘Bother’ is a deeply emotional ballad accompanied by the sad sound of a soft piano. It is followed by ‘Hero’. In accordance with the strong beat, Tricky repeats the words “I be your hero, I be your superman” in a loop. The promise of cheap and quick salvation. Tricky directs the words to a girl dancing in front of the stage and gets his ego boost for the night. Apparently this leaves him exhausted and another break follows.

Tricky is still absent when the clear voice of a woman comes on. Later I learn that it belongs to Tricky’s long-time singer Francesca Belmonte. ‘We Begin’ provokes an eerie feeling. But again, the song’s potential is lost on the mixing desk and becomes a dull intermezzo. The trip-hop beat lingers in the background, waiting to break out again. In vain. Tricky only returns towards the end. He continues with ‘Here My Dear’, and while he sings himself this time, Tricky’s vocals are still double-tracked and the beat is repetitive and boring.

“Don’t be scared!” he suddenly yells into the microphone. Slowly people are moving forwards, timidly climbing on stage. “Don’t be scared!” A few fans are forcing themselves to dance while Tricky keeps on shouting: “Come on, don’t be scared!” Abruptly after this outbreak he ends the show after only fifty minutes. Forty for us.

The lights are on and empty cups are lying scattered on the floor. The only proof of the gig’s occurrence. Quick and dirty. Tricky’s performance has left its audience in a confused state. Most people have already left the room, yet a handful keeps screaming and cheering while the stage crew takes the equipment apart. My urge to leave is toppled by the urge to see what will happen next.

And then: ever so slowly the stage crew starts reversing their movements. Instead of taking the drum kit apart, they put the mic back on. Twenty minutes after the official end the band returns to the stage. A few people, coats in hand, peek curiously inside. Bit by bit the room fills up again. Tricky plays another few tracks. The set is equally unentertaining. One last dragged out song and the angry audience is somewhat soothed. And Tricky’s gone again.

In a purely musical sense Tricky has met the usual high standards he has set for himself. But performance-wise one would have expected more from a man who acted in The Fifth Element. Tricky really was presenting Skilled Mechanics rather than performing it. The emotions of the songs were mostly lost while the unusual breaks broke the flow. Quick and dirty. The gig left a cheap aftertaste. As Oh Land sighs “I’m not really into it”, Tricky really didn’t seem into it.

The Secret Life of Organs: The Necks & James McVinnie 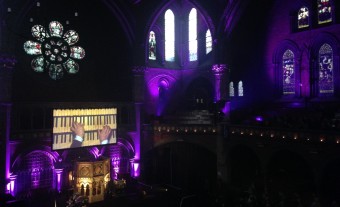