Norwegian filth-peddlers Årabrot are one of my favourite bands. I love this band. Love them. Once I’d heard the scandalous noise of Solar Anus I was hooked. How could you not be with a name like that?

Primarily the murky brainchild of bellower/guitarist, and one-man army, Kjetil Nernes, Årabrot have been pushing heavy rock boundaries since their immaculate inception in 2001, mixing noise rock and punk with elements of black metal, theatrics and sludge.

Now Årabrot are about to release their seventh full-length album The Gospel, and what an album it is.

In the summer of 2014, just before embarking on a tour, Nernes was diagnosed with throat cancer. After a few months of intensive therapy Nernes was given the all clear; during this time The Gospel was gestating. Lyrically reflecting Nernes’ black humour and dramatic imagery, The Gospel sees Nernes examining his experience of life and death as only he could.

In honour of the release I asked Nernes a few questions about Årabrot, the making of the album and overcoming such a terrible illness.

In the past Årabrot’s music has been as heavily influenced by surreal literary filth by writers such as George Bataille and the Marquis de Sade as it has by noise rock and bands like The Melvins. What is it about the work of those writers that has inspired you?

Årabrot is sex and death and Bataille and De Sade are the masters of sex and death. I have been heavily influenced by writers interested in those topics, especially Bataille. There are others too, like Comte de Lautréamont’s Les Chants de Maldoror.

During the summer of 2014 you were diagnosed with throat cancer, which must have been an awful experience. Do you feel that changed the way you view life/music/art?

The sickness and the treatment of the sickness certainly change you. The man who has been in hell never forgets, you know. My view on music and art might not have changed radically but I am definitely more determined than I have ever been. Onwards I say.

I saw you play the Windmill in London during winter 2014 and it was absolutely amazing. There appeared to be no noticeable effect on your performance whatsoever, which was remarkable so soon after such a harrowing life event. Have you had to treat shows and performing in a different way since your treatment?

Thanks man. No changes to the show really, but I definitely can’t party like I used to. I guess I just grew old. Real old, real fast.

Please tell us about the writing of The Gospel. How was the process this time around? In the press release you talk about a sense of being embattled, and I feel this sense of fighting and overcoming permeates the album.

Yes, The Gospel channels a lot of feelings and thoughts from the period when I was sick. It felt like a battle, the war against oneself. Often I picture a WW1 soldier overlooking the battlefield, with the smoke coming out of the bomb craters and casualties spread out over the landscape. This vibe really overshadows the album thematically.

There’s a shift in the lyrics throughout The Gospel that differs from past Årabrot releases, especially Solar Anus and I Modi. Here the lyrics are more gothic, creating dramatic images of apparitions and a sense of creeping foreboding; they’re less carnal and salaciously obscene. Was this a purposeful change or a subconscious one?

A purposeful one. You know, after the orgasm there’s either love or war. I guess I’ll deal with love later.

The music on The Gospel is multi-textured with a dense, wide palette of instrumentation, at points featuring samples, piano and monastic choir, enhancing the noise-metal sound further. What was it like expanding the sound palette of Årabrot into these new territories?

We actually have been experimenting with wider instrumentation for a long time, incorporating piano and pump organs to the sound. The song material I had for The Gospel had a lot of room for extra instruments, even percussion. I am very interested in how different instruments correlate and correspond. In my opinion it makes the music sonically more interesting.

The Gospel features contributions from SUNN O))’s Stephen O’Malley, Ted Parsons of Swans and Killing Joke, and singer/songwriter Karin Park. How did these collaborations come about and what do you think they have brought to The Gospel?

All of the many musical guests provided considerable contributions. They are obviously amazing world-class musicians so including them definitely shaped the sound of the album. I didn’t really have an idea of adding so many different players but it somehow worked out logistically. O’Malley and Ted are old friends. We set up recording sessions in the church we live in and invited people up here. Kind of Exile On Main Street style. All good and a lot of fun.

Since 2014 you’ve been ridiculously busy. As well as The Gospel you released a trilogy of EPs: Art As Murder, I Modi and You Bunch Of Idiots (as well as the recent For Lack Of Discipline You Will Die). What was the process behind these, did you ever think to put them together for an album or were they written separately?

They were written separately and they are all very different thematically. Those EPs are good for experimenting in-between albums. I tend to have a lot of different ideas and material ready and these releases generate a lot of room for being creative.

The label Fysisk Format (also home to the excellent Okkultokrati and Haust – check out the fantastic documentary on the label’s history with great interviews with Nernes and the other bands) have put out all of your releases since 2010’s Revenge, can you tell us a little about your relationship with them?

Kristian Kallevik – head of Fysisk Format – co-founded Årabrot with me back in 2001 so we have worked closely for many years.

As if releasing your own music and touring wasn’t enough, last year you joined The Quietus’ John Doran on his Jolly Lad book tour (which is a great read). How did that come about and how was that experience compared to a full Årabrot tour?

Årabrot have through the years done a lot of experimental avant-garde stuff, music for silent film, collaborations with sound artists, etc. Doing a spoken word tour in the vein of those projects made much sense and Doran being an old friend it was easy saying yes to such a project. The tour went really well and even if it’s obviously very different from a regular rock tour it still made much sense. Årabrot is a two- or even three-headed monster.

And finally what does the future hold for Årabrot? As well as a European tour do you have any immediate future plans?

The album is coming out now, then five weeks in Europe, three weeks in the States before a final show at Temples Fest, Bristol, opening for The Melvins.

The Gospel is out now and Årabrot are touring the UK throughout March, playing Corsica Studios in London on the 17th. 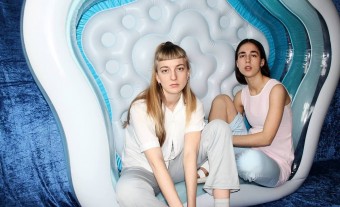 The Nordics are snowed under with music at the moment, as proven by our new column focused on the region. Read on to discover acts like Smerz, EERA, Masasolo and many more...
Read More