Generally we don’t post remixes on The Monitors. It’s not some sort of stance; more that we hardly have time to listen to all the original tracks we get sent, let alone some bedroom producer in Kentucky’s reworking of a Rihanna track we hated in the first place. Life’s too short you know?

Well life is not too short for this remix. In fact, we’d wager that there’s very little you could do to improve your life in the next three minutes than listen to the new version of Fluffy Floor’s ‘Tongue’ – fashioned by the band’s guitarist Geis† – which we are flipping delighted to premiere today.

The original ‘Tongue’ (see bottom of page) is an agreeably brooding track pitched somewhere between Breeders and Jesus & Mary Chain, but Geis†’s re-imagining flips the track totally on its head. Trading the guitars for expertly tweaked electronics, it takes the hook in a completely different direction, yet manages to somehow arrive at that same satisfyingly catchy destination. Imagine the deft production of Glass Animals mixed with Minotaur Shock’s electro-acoustic approach and the airy sense of space Dean Blunt brings to his best work, and you’re halfway there.

Fluffy Floor hail from the German-French bordertown of Saarbrücken, where they founded a “four-person-doom-sludge-project” operating out of an illegal rehearsal spot close to a nearby railway line. Sadly the excellent transport links proved the downfall of the band’s original incarnation, as one member, Iason, left to study sound design in Hamburg, while another found a new life in Uruguay making German Schlager music (we’re assured this isn’t a joke).

Not many bands could survive being split in two, but luckily the remaining members, Jonathan DeBeauvoir (vocals, bass) and Henn (drums), teamed up with Iason’s younger brother – the aforementioned Geis†. Yet while it may be his technological experience that’s resulted in this stylistically distinct remix, it also stems from the fact that the whole band like to listen to electronic music. Oh, and enjoy a second-hand book habit.

“The song was inspired by a San Francisco photo book we bought at a flea market,” DeBeauvoir explains. “Looking at these great pictures gave us a warm feeling in the chest area, while it was a cold windy day at our home town. When we were sitting drinking tea, drying our clothes, Geis† sat down and played some tunes. I started singing the lyrics from our song ‘Tongue’ and a few hours later we had the base frame of this remix.”

It’s a strange quirk that, while the vast majority of musicians (and listeners) enjoy a wide range of genres, very few bands explore far beyond the musical boundaries they’re most comfortable with. With this remix Fluffy Floor have proven themselves equally adept in two different environments. We look forward to seeing where they head next… 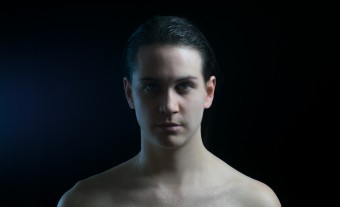 The seductive yet minimal new track by the enigmatic JPTR is the greatest act of self-love you're likely to experience in the next five minutes...
Read More