With over ninety live acts playing over three nights, across twelve different venues within a twenty minute radius, not to mention several conferences and networking events being held in the Clarion Congress Basecamp, the TC world was my musical oyster.

So having flown over vast mountain ranges draped with snowy blankets like be-Daz’d doilies with my face practically stuck to the window, camera clicking in hand, in such an excited state that I completely forgot about my long-standing phobia of flying, I finally arrived in Trondheim’s “Hell” Airport at 8pm (I shit you not – and Hell is exactly what it turned into for the return leg of the journey!). I swiftly hopped onto the Flybussen to Trondheim (what, no huskies and sleigh – disapp face) and TCHQ for three days of Norwegian music, magic and mania. Here are some of the highlights for your delectation, as the poshies say:-

Björk vocal doppelganger ARY is set for great things, if music media mutterings are to be believed. This otherworldly, gamine popstrel, whose quirky, ethereal ‘Björkness’ is a foil to the cold electronica she favours to bring musical life to her kooky, youthful lyrics, performed her Trondheim Calling set in the impressive Rockehim venue, where she was joined on stage by fellow Norwegian, Fay Wildhagen.

Having met ARY I can attest to her disarming presence, something which was magnified tenfold when this ingénue took to the stage. It mattered not a jot that slightly raw, unpolished IDs formed the bulk of her set-list, as from the off ARY held her captive audience spellbound. An unwitting enchantress, ARY is a soulful sprite, who gave a charmingly unaffected and warmly engaging performance that lingered long in the soul, well after the lights of Rockheim had dimmed.

Indie boys Dråpe, fond of more than a drop of fuzz, played a blistering set for their Friday night headline slot. Frontman Myhre was like a man plugged into an electrical socket as his hand shocked its way around his guitar strings like the Roadrunner on speed. An outfit tighter than Kimye’s PVC pants, they were probably the most polished of the acts that played Trondheim Calling this year. Hit after hit was faultlessly performed, from nu-gazer ‘Pie in the Sky’ to adrenalin pumper ‘Round and Around’.

Astonishing vocal of the night came from Myhre on Canicular fave ‘Memories’, but highlight of the night was ‘There Is A House’, which I’ve renamed, ‘There Was A House’ after Dråpe succeeded in ripping down its virtual walls with a wrecking ball of noise. Thrilling wasn’t the word. Fingers crossed 2016 will see more new music from these exhil-rousers.

While the honeyed duet of vocals from guitarist Håkon Brunborg Kjenstad and frontwoman Ragnhild Fangel Jamtveit on scorcher ‘New Friends’ were just gorge, it was the band’s off-the-radar cover of ABBA’s ‘The Winner Takes It All’ that saw sonic pocket rocket Jamtveit give a vocal performance that would defy Kate Bush at her Wuthering height. A force to be reckoned with, Panda Panda are one of this reviewer’s tips for the top – maybe not this year, but certainly 2017. Watch this space!

Neither hellfire and brimstone, nor the worst weather of the festival (my new karaoke song is Paul Simon’s ‘Slip Sliding Away’) was gonna keep me from seeing denim devils and fuzz punksters Rick Ashtray. Front of house duties were shared by bassist Lasse Febakke and Gold Celeste’s not-the-drummer drummer (who was in his new guise of not-the-drummer guitarist) Petter Haugen Andersen, the man of a thousand bands.

Putting the F into Fun, the N into Noise and the J into Jam-Packed Pub, this was the King of Kan’t-hear-myself-think gigs, providing the low-ceilinged, narrow Café Lokke venue with a paint-blistering, wall-shaking forty minutes its timbers are ne’er likely to forget. It was a bloody good job I had a bit of a walk to the next gig, as it took a full thirty minutes for my fuzz-garbled ears to expunge the grunge. Frantic, frenergetic, frenzied and fuzzlicious – this was the gig of all gigs at Trondheim Calling. 10/10.

24 year old heart-throb baritone Tellef Raabe, Trondheim Calling Headliner with a capital H, was certainly ‘Flying On The Ground’ during the festival’s closing set. Having done all the hard graft of touring the circuit, growing a strong, loyal fanbase and producing oodles of catchy material, Raabe is now on the cusp of reaping the rewards. You can feel he is tantalisingly close, itchily so! Fuelled to the brim with nervous energy, Tellef effortlessly flexed his vocal muscle through a series of hit songs from ‘Stranger Than The Rest’ and the swoon-inducing ‘Dear Aphrodite’ (my fave) to his latest single, ‘Flying On The Ground’.

Accompanied on stage by his excellent five-piece band, as well as his delightful sister Sigrid, whose gorgeous voice was light to his dark, Tellef gave an energetic, commanding and highly polished performance that brought Trondheim Calling 2016 to a rapturous and dramatic close. His new album is due out in Norway shortly – lucky them. How long we’ll have to wait for its international release is anyone’s guess. Hopefully it won’t be too long!

THE BEST OF THE REST…

… included newbies from the NO FOREVERS stable Antler, who produced an highly toxic cocktail of stimulating synths, hypnotic vocals and possibly some of the best percussion on show during the course of the festival. Debut album on the way in April.

Talented purveyors of understated musical elegance, Østfrost, provided TC with the most exquisite of performances. Players of such wondrous instruments as the Indian harmonium and viola, this young band had the audience in their thrall as they wove their musical magic, playing stalwarts such as ‘I Don’t Want To Stop’ and ‘Wooden Floors’. Østfrost have just released the vinyl version of their eponymous debut EP.

Musical gelignite, Slutface, exploded like a bomb as they turned Ora Studio inside-out during their volcanic Trondheim Calling set, which included crowd revver-uppers ‘Shave my Head’, ‘Bad Party’ and their latest in-yer-face single, the anthemic ‘Kill ‘em with Kindness’. Currently working on a new album, late ’16 should see them burst onto the bigger worldwide stage with more sass than a Kardashian derriere.

Kari Harneshaug is one of the most underrated female soloists in Norway. However, all that is set to change when her new album hits the musicverse later this month. A songstress with a dramatically powerful voice, with the help of Snøskred’s Karl Klaseie (guitar) and Kyrre Laastad (synth) she gave a memorable performance that had the huge final night crowd completely in thrall to her.

The Ones That Got Away …

Once is a mistake, twice is stupidity. Boo hoo. I managed to miss the aforementioned Snøskred not once but twice – doh! By all accounts, their performance during the Riot Factory night at Moskus was fantastic/electrifying/rockin’ (depending on who you’re quoting). Their debut album Empty House hit the shops last week – it’s a stunner. In the words of Shirley Manson, “stupid girl”. 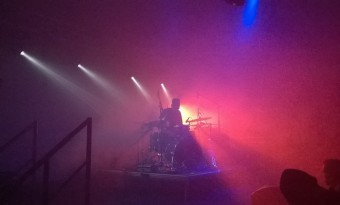