Tindersticks emerged on the music scene alongside other fellow suited beatniks such as Gallon Drunk and The Flaming Stars. They sang like Jim Thompson’s characters talked, and looked like they had stepped off the set of a 1940s film noir. Alas, the ’90s were not the time of Men; the cultural dials clicked the other away, and it was the time of the Lad. Britpop had arrived.

Over 20 years later Tindersticks release their 10th album The Waiting Room. This is a slow, deliberate and nuanced work that brings together a more minimal and focused sound that Tindersticks have been moving toward over the last decade.

When multi-instrumentalist Dickon Hinchliffe left the band in 2006, Tindersticks consolidated and streamlined their sound. A little of Tindersticks went a long way, but with Hinchliffe’s departure, out went the epic, swirling and sometimes overly wrought string sections that really dragged down and made some albums a slog to digest. This, coupled with the fact that they’ve been making soundtracks in collaboration with the French auteur director Claire Denis exclusively since 1996, meant Tindersticks had time to hone and get their film noir sound down to a tee.

Tindersticks have always had a cinematic quality to them. Their sound pushes vivid imagery to the fore of the mind’s eye. It’s their strongest ability. The Waiting Room’s best track ‘We are Dreamers’, a duet with Savages’ Jehnny Beth, comes just before the curtain call. A broodingly abstract Bonnie and Clyde romance where reality and dream violently collide – “This is not us / We are dreamers” – Stables and Beth sing over each other.

‘Were We Once Lovers?’ displays Tindersticks’ superb musical restraint; a grim, repetitive bassline pulses along as guitar, strings and backing vocals rise and fall, each instrument working perfectly against and with each other, adding deep, rustic texture to the track.

The album is relentlessly subtle and has a conservative streak running throughout. It feels instantly familiar, which it is; Tindersticks have released an equivalent to every track on this album elsewhere before. For example, ‘Hey Lucinda’, a duet with the late Lhasa de Sela, isn’t without its charm but is overshadowed by de Sela’s magnificent previous duet ‘Sometimes it Hurts’.

The Waiting Room is an album that is very considered, very precise and ponderous. The tracks feel like they’ve been worked over like a battered punch-bag. Almost as if it were a soundtrack to a film only they’ve been privy to – no note is out of place. Too many tracks have a tangential, dreamlike interlude aspect to them – like linking passages from a film. Curiously, the album comes alongside a collaborative film project in which every track is translated to film by a video director, though it’s easy to imagine that each film were made already for Tindersticks to soundtrack.

Tindersticks give off the whiff of transcendence in things lost and gone. Even something as threadbare as The Waiting Room offers this. In Krzystof Kieslowski’s Three Colours Red the protagonist Valentine strikes up an unlikely friendship with a retired judge. They share a bond that hints, if age hadn’t separated them, there could have been something more. Running parallel to the story we see a young man who lives opposite Valentine studying to become a judge, but in the mysterious way in which life unfolds the pair miss each other by seconds and never meet. It is subtly suggested that through some schism of time the elderly judge and the trainee judge are somehow the same person, but Valentine is always slightly out of time to meet the love of her life.

The Waiting Room is like this. A hand stretched into darkness, searching but never finding. It is doubtful that Tindersticks will ever make a truly great album; it will be forever out of reach. And that is perfectly fitting. 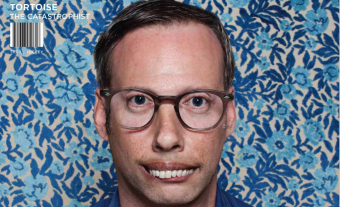 Chicago's favourite sons Tortoise show that they're able to be unconventional even when they're being conventional, on their long-awaited seventh album...
Read More