This month’s music video round-up stars David Bowie, Darwin Deez, Donald Trump and a bunch of flesh-eating Barbies. Not all in the same video though, unfortunately…

Apothek – Family
Norwegian duo Apothek specialise in slickly produced tunes, and apparently now deal in slickly produced videos too. ‘Family’ is full of mystifying symbolism and Bulgakov-esque growth spurts, as a chemistry set becomes a conduit for plant-based phantasmagoria…
…
Darwin Deez – The Mess She Made
Darwin Deez is the king of comedy music videos. Or should that be queen? ‘The Mess She Made’ sees Deez form the lower half of dozens of banknotes, merging with everyone from George Washington and former Türkmenbaşy Saparmurat Niyazov (a man whose ego dwarfed even Kanye’s) to, yes, our very own Brenda. A great idea, flawlessly executed.
…
David Bowie – Blackstar
We’ve already noted how much better ‘Blackstar’ is than Bowie’s last comeback track, and the video pisses over the one for ‘Where Are We Now’ from a similarly great height. Infused with a sense of apocalyptic doom that’s apt for the current climate, but with enough fantasy to trigger memories of Bowie’s Labyrinth days, it also features him looking a bit like a character from Pan’s Labyrinth. Labyrinth on Labyrinth action? Yes please.
…
Fine Times – Bad::Better
Pitched somewhere between Teleman’s ‘Skeleton Dance’ video and the 3D Pixar short Day & Night, Fine Times find themselves in split-screen paradise here. ‘Bad::Better’ manages to be cute and light-hearted without crossing into irritating tweeness (always a danger when the accompanying track features that much whistling).
…
Foxtrott – Shaky Hands
This is basically an Edward Burtynsky brought to life and smothered with dancers, which is fine by me. The choreography and cinematography are both superb, and luckily the camera operator doesn’t seem to suffer from ‘Shaky Hands’ either… (sorry)
…
Kill the Noise feat. AWOLNATION & R.City – Kill It 4 The Kids
Donald Trump may represent the last political fart of a country that’s become a bleak parody of itself, but at least he’s providing satirists with plenty of material. The message here may be communicated with a sub-Banksy lack of subtlety, but it’s done through the medium of claymation which makes it automatically awesome.
…
King Gizzard & The Lizard Wizard – Trapdoor
Speaking of claymation… I don’t know whether kids’ classic The Trap Door made it to Australia, but this video manages to grasp the silly spirit of its animated namesake either way (with a little dash of Knightmare to boot). This is the sort of video that Madness used to make, and as someone who wore out his VHS compilation of Madness videos as a kid, that is a very high compliment indeed.
…
Lowly – S.W.I.M.
I managed to miss Lowly’s performance at Mutations Festival recently, and I’ll be making sure to miss any dinner parties they host in future too. While I’m sure their cooking skills are exemplary, the video for ‘S.W.I.M.’ suggests some of the ingredients might be a little… inhabited. Bugs and beasties abound, so if you’ve an aversion to such creatures then might be best to give this one a miss. Everyone else, tuck in.
…
Missy Elliott feat. Pharrell – WTF (Where They From)
Missy Elliott + a glitter-ball playsuit + marionettes = a winning formula for a perfect video. You’ve probably all seen this by now but hell, give it another watch. It’s not getting old (bet Pharrell wishes he’d been played by a puppet in the ‘Blurred Lines’ video too)…
…
Society – The Fear The Hate
There was a fair bit of comment a few weeks ago expressing concern about how the suicide bombing that took 40 lives in Beirut on November 12th was overly overshadowed in both social and news media by the Parisian massacre the following evening. In a weird way I suspect videos like this one, by the What Took You So Long collective, will go further in correcting this instinctive bias than a thousand hand-wringing Facebook statuses.

The documentary footage in ‘The Fear The Hate’ helps increase our familiarity with Lebanese youth culture and illustrates some similarities with our own, via footage of #YouStink protests (against incompetent refuse disposal), drug-fuelled parties, ranting taxi drivers and burlesque groups. Some Londoners protesting against Syrian air strikes recently have doubtless spent their weekends indulging in similar activities. It’s a great piece of evocative yet objective film-making, and put the unexpected thought in my head that I’d actually really like to visit Beirut. Although possibly not right now.

(The tune’s good too, although Jamie Girdler is the vocal spit of Richard Ashcroft to the point of distraction (vocal spit being an admittedly unfortunate way to describe a voice double…))

…
Tommy Trash – Luv U Give
… And so to something a little less edifying, although no less entertaining, to round off this edition of MPEGs Eleven. ‘Luv U Give’ is part one of a triptych of videos telling the gory story of a cannibal island using stop-motion figurines (you can watch the other parts here), and is sure to delight fans of Robot Chicken and Celebrity Deathmatch. Now, who’s hungry…

Premiere: Druggy Pizza - In My Veins 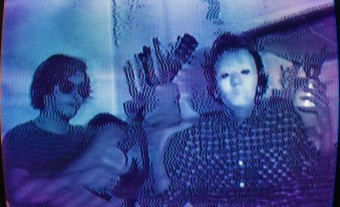 We're delighted to offer an exclusive slice of the piping-hot punk mayhem that is Druggy Pizza, via their nightmarish new video for 'In My Veins'...
Read More