“I wanna feel magic and stars” sings Lucy Rose on ‘Sorry My Love, It’s You Not Me’, a track from Ghostpoet’s excellent third album, Shedding Skin.

It’s not that unreasonable, is it? A call out from the mundanity of everyday life for something truly special. Surely it’s all any of us want. On a Saturday night in west London, Ghostpoet delivered it in spades.

Taking the stage in front of a black backdrop bearing his name in white capital letters, he’s wearing a black t-shirt and trousers. His band has been beefed up since I last saw him at Camden’s KOKO in 2012. Befitting the new album’s rockier dimensions, he has a guitarist, drummer, keyboard player and a bassman who will swap to keys as necessary. There is also a string section.

He chooses, surprisingly I think, to begin proceedings with the atonal dub of ‘Garden Path’. It’s loud, but not particularly enticing. The levels seem in need of adjustment to me; Ghostpoet’s voice less the familiar rasp and more a bit of growl.

Happily, the gig begins in earnest with a fairly brutal reading of ‘Better Not Butter’. I say brutal because, in our position at the front of the crowd, on the extreme left, I have a speaker stack blowing directly into my left ear. The rueful, vocal interplay of ‘X Marks The Spot’ is an early highlight and provides confirmation, if it was ever needed, that Ghostpoet live in 2015 sounds exactly as those who have bought Shedding Skin would expect him to.

Wisely, Ghostpoet focusses the early part of the gig on this album, which always sounded as though it had been designed with the live arena in mind. So while he throws in ‘Survive It’, it’s surrounded by new material like the woozy skank of ‘That Ring Down The Drain Feeling’ and the ever so slightly tougher ‘The Pleasure in Plether’.

At this point it hits me, that not only is the sound coming offstage a more intense one, but so is Ghostpoet’s performance. At times, he seems lost in it as he bounces around the stage, exhorting his bandmates on. For me, it’s a big contrast with that previous show in Camden; it’s a welcome one too. As I lean against the crash barrier, I find myself thinking that I literally cannot remember the last time I felt so happy at a gig. It’s just blissful.

A guest spot from a hyperactive Lucy Rose on the aforementioned ‘Sorry Love…’ ends with Ghostpoet demanding that we “Make some noise for Lucy Rose… make some more noise for Lucy Rose!” Following ‘12 Deaf’ and other dubby workouts from Some Say I So I Say Light like ‘Cold Win’, the prowling bassline of ‘Shedding Skin’, with its repeated call to “simmer down, simmer down”, casts its spell. Lost in the music, I know instinctively that Ghostpoet will not put a foot wrong from here.

It’s an impression confirmed by ‘Yes, I Helped You Pack’, a tale of love gone sour in the face of addiction, powered by a properly propulsive drumbeat. This, to me, is the sound of a man who has spent hours listening to Massive Attack’s Mezzanine. This, to be clear, is a good thing.

‘Cash And Carry Me Home’ was perhaps the highlight of Ghostpoet’s first album. Its arrival here is greeted appropriately. To me, although already a great song, it really benefits from being given the full “Ghostpoet: live 2015” treatment. It comes close to bringing the house down here.

‘Off Peak Dreams’ closes the main set off to the delight of the guy stood behind me and the band leave the stage, barely able to suppress the smiles on their faces. It’s been that kind of night.

Returning to the stage, we are asked if we want to hear some more and the band launch into ‘Nothing In The Way’. As I wrap my arms around the missus, I feel that if the gig ended on this beautiful, string-laden note of hope, I would go home happy. I tell her that and she smiles. But it won’t end that way. I remember thinking in 2012 that ‘Liiines’ would be a perfect set-closer and it just misses out on that honour here. The lyrics seem like a tale of redemption foretold for their author; nobody can say now that the “bait ain’t juicy enough”, we’re all hooked.

Having hooked us, we are sent out into the night on ‘Us Against Whatever Ever’. I don’t know whether this is dub, dubstep, grime or a mixture of all three but I do know that I felt this song in my very core as it battered the Shepherd’s Bush Empire crowd.

It was a bone-shaking, brain-melting way to end a fantastic evening. I don’t know if you can say it was the night the twice Mercury Prize nominated artist arrived. To me, though, I saw Ghostpoet as a man who now owns the stage he performs on and, crucially, now has a band to match . 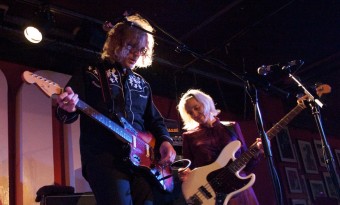 Besnard Lakes may not be allowed to use a smoke machine at their 100 Club gig, but they offer the crowd plenty of smoking guitar solos to make up for it...
Read More