Blessed with a free-flowing, mercurial sound that belies some suavely tight composition and musicianship, Montreal ensemble Avec le Soleil Sortant de sa Bouche are hard to define. Bursts of funk, prog, afrobeat and post-rock fly out of their sprawling, ecstatic debut album Zubberdust! (one of our favourite albums of 2014) like errant fireworks, but somehow the end result remains sublimely smooth.

This is despite the occasional wild exhortation from bassist and singer Jean-Sebastien Truchy (formerly of fellow Constellation group Fly Pan Am), whose wordless vocals frequently evoke the likes of David Byrne and Magma’s Christian Vander. With Avec le Soleil Sortant de sa Bouche currently in the process of giving Europe the full Zubberdust! treatment, we spoke to Truchy ahead of their UK dates (which include an appearance at Jake & Dinos Chapman’s Nightmare Before Xmas ATP festival and a headline show at London’s Birthdays on November 22nd – see bottom of article for full list)

You formed in 2011 but didn’t put out a debut album until last year’s Zubberdust!. What took so long?

Jean-Sebastien Truchy: Well, they are many reasons for this. One is that when we first got the band together, we were three: Sebastien [Fournier, guitarist/engineer], Nasir [Hasan, drummer] and myself. Slowly, we had more and more of an idea of what we really wanted to do and who we wanted to do it with. At one point we were seven I think.

Which is the second reason, because most people at that point had various other projects, whether they were solo or with other groups. We would at times have to stop working on Avec le Soleil Sortant de sa Bouche for weeks or even months. It was only really towards the end of 2013 that we were able to focus on the record.

That said, the follow-up is almost all written and should be recorded in April, with a tentative Fall release.

‘Zubberdust!’ – crazy album, crazy name. What is the title supposed to convey? While not usually a fan of exclamation marks personally, in this instance it feels like it really communicates the exuberance of the album…

The name is Urdu for ‘fantastic’ (Nasir came up with it). We added the exclamation mark as we wanted the title to be a statement, and also we wanted to be a bit cheeky and laugh at ourselves at the same time. It also sounds beautiful and like it should be exclaimed.

‘Zubberdust!’ is technically a 10-track album, but it largely consists of two extended pieces. Were those pieces split into more tracks on the digital releases in order to increase streaming royalties, or was there another reason?

The record is four songs long, and you’re right in your assumption, it was divided into ten songs for the digital sales. It made no sense to release this record digitally otherwise. It’s something that Constellation brought to our attention and so…

Have you been able to analyse how people listen to the album digitally? Are there particular sections that seem to be more popular, and do you still get the same slight listener drop-off after track 2/3 like on most albums? Or does the seamless progression help keep people listening longer?

I haven’t paid attention to the digital sales. Personally, these songs are made to be listened to as a whole, but I don’t know how people relate to them and perhaps they’re happy with only hearing certain parts. As far as the drop-out you’re referring to, I haven’t looked into that either but I’m sure it happens to us as well. Why not right? I think this is part of our times. We all have a short attention span (or shortened…). It seems like most of the time, we only survey things… and with the length of our tracks, I’m sure we’re no exception to this trend…

What are the ambient recordings that puctuate the album, and where are they from?

The ambient recordings are small stories. One is referring to the past and contains samples of past rehearsals, conversations between takes and travellings I have done. The other is made up of the same kind of material but is referring to what’s to come. Versions of songs to come, etc. I assembled them trying to create a little universe of their own, where multiple possibilities of past memories and future possibilities are present at once in their given prospect.

I’ve sadly never been to Montreal, but the amount of great records put out by Constellation, Fixture, Arbutus etc. over the last few years suggests a music scene of unparalleled strength and diversity. Is there something about the city that inspires/fosters creativity?

In spite of gentrification, Montreal is still a pretty cheap city to live in. And cheaper rent means more time to focus on developing your art. Also, the fact that a lot of people come to study in MTL means that you always have new and fresh ideas coming from all over the place. We have been lucky as it seems that every ten years we get focus on the town again. Certainly since the ’80s with the MTL hardcore scene but I’m sure before that as well.

MTL is also very diverse in terms of its population. There’s so much one can get out of it, culturally…

The gleeful energy and expansiveness of Zubberdust! seems in the spirit of the likes of Magma, who also use their own lyrical language. What appeals to you about wordless singing?

They are so many great writers… I am not one of them… If I could write lyrics like Crass did, or Gainsbourg, Brel or Desjardins or, I don’t know, any of the greats, I would, but I don’t feel like I can. I can, however, transmit an “emotion” through the use of my voice, and that is what I try to do. I am not interested in inventing a language or something. Just using the voice as an instrument and try to convey something that way.

That said, communication can be done in many ways and so I guess you could say that I am using my own language. And I like the idea that it can be ‘understood’ internationally.

Does ‘Zubberdust!’ dominate your current live set, and how rigidly do you stick to the studio arrangements when playing live?

Now that we are on tour, it does. We play the record plus one or two new ones. We also have a third new one in our back pocket. As of now, we try to emulate the record as best we can. The thought of taking the tracks elsewhere live has crossed our minds at times, but as of now we haven’t acted on it.

Will your next album follow a similar structure to Zubberdust!, or are you still not sure how it’s going to end up?

It will be similar in the sense that the songs will have a play on the form and the content. The aim is still to do something catchy, and hopefully that can get us and other people moving, dancing. That said, I’m really trying to push the orchestration further. I feel like it’s getting better, but maybe I’m just kidding myself, ha! I love the orchestration of ’60s pop music… and avant-garde music… I’m really trying to find an orchestrational meeting point and add it to ‘pop’ music.

Interview: Who are Maximum Joy? 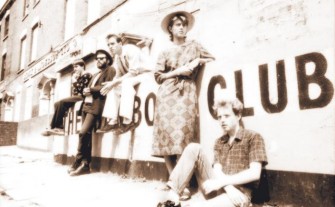 Up until a month ago Nicholas Burman wouldn't have been able to tell you, but Maximum Joy's reformation reminds us of their influence on British alt-pop music...
Read More